The early years of Supreme Court Justice Ruth Bader Ginsburg and the historic case that catapulted her from instructor to civil rights attorney are the focus of On the Basis of Sex, a by-the-numbers biopic from director Mimi Leder (Deep Impact).

Mimi Leder’s On the Basis of Sex follows the career and life of Supreme Court Justice Ruth Bader Ginsburg (Felicity Jones), starting with her first days as a law student at Harvard, one of only six women admitted that freshman year. Dean Erwin Griswold (Sam Waterston) has opened up the school to accept a handful of female students each year, inviting them to a dinner at his house and essentially embarrassing them by making each one stand up at the table and explain why they are attending law school. Ruth realizes she has a steep uphill battle to be taken seriously, especially after one of her professors, Brown (Stephen Root), refuses to call on her in class when orally quizzing the students. Ginsburg and her husband, Martin (Armie Hammer), also a Harvard Law student and one year ahead of her, live in a small apartment with their infant daughter Jane, and when Martin is diagnosed with testicular cancer at age 25, she plays caregiver and mother while also attending both her classes and Martin’s, reading him back the notes from his class and taking his dictation to complete his papers. Martin recovers (despite a 95% mortality rate), and the family moves to New York, where Martin begins to practice tax law while Ruth begins teaching at Rutgers University after being turned down by every law firm in the city, eventually teaching Sex Discrimination Law to a mostly female classroom. When Martin discovers a case of possible gender discrimination in a tax law brief where Charles Moritz (Chris Mulkey) was denied a caregiver deduction on the basis that he was a man, he brings it to Ruth he believes it could change gender discrimination, and the two decide to take the case and appeal it to the District Court.

On the Basis of Sex would have been a much better film if the screenplay, written by Ruth Ginsburg’s nephew Daniel Stiepleman, didn’t feel like a film school project (the old adage “write what you know”). Large gaps of time are skipped, the Ginsberg family is painted in a mostly positive light (Ruth’s only demons are her often overbearing determination, her courtroom inexperience, and most men not taking her seriously), and it isn’t really until we get into the actual discrimination case that the story becomes less mundane and see what really makes Ruth tick, yet director Leder still felt it necessary to give the real Ruth a cameo as herself walking up the steps of the Supreme Court just before the credits roll. All of the performances are stellar, elevating the material immensely, particularly Felicity Jones and Armie Hammer, who have tremendous on-screen chemistry that I wouldn’t be surprised if more casting directors don’t start pairing these two up on a more frequent basis.

As I noted in my review of Mirai, Universal has been putting out some incredibly terrific looking Blu-rays recently, and again, this is no exception. Captured at 2.8k resolution with ARRI Alexa Mini and SXT cameras, this AVC-encoded 1080p transfer is very film-like in quality. The two periods in which the film takes place (mid to late 1950s and early 1970s) are distinct and reminiscent of movies from those periods, the earlier taking on a more bluish hue while the latter much warmer with yellows and browns. Colors are natural and pleasing, consistent throughout. Detail is also sharp, from fabric textures to facial features. Contrast is strong with deep blacks and bright whites that do not appear to crush or clip.

The DTS-HD MA 5.1 track is about what one would expect from a drama. Dialogue is clear and understandable, directed mostly to the center channel. Music and environmental effects help provide a nice wide soundstage with additional depth as the surrounds are engaged. LFE is adequate, providing some emphasis to the lower end of its music and effects.

Three EPK-style featurettes are all we get here, and they barely scratch the surface.

A Supreme Team: Making “On the Basis of Sex” (1080p; 6:24): It is here that we learn that the screenplay was written by first-timer and Ruth Ginsberg’s nephew, Daniel Stiepleman. Director Mimi Leder explains what drew her to the movie, and the cast and crew discuss how great it was to work on this film.

Legacy of Justice (1080p; 3:04): The cast and crew remind us of what an important figure Ruth Bader Ginsburg is (and I’m not necessarily doubting what they say).

Martin and Ruth: A Loving Partnership (1080p; 3:04): A look at the couple’s relationship and the on-screen chemistry of Jones and Hammer.

Perhaps On the Basis of Sex would have felt like a better movie if it hadn’t come on the heels of the documentary RBG, which was much more encompassing and didn’t have the clichés many biopics fall into. Still, Universal’s presentation on Blu-ray is outstanding.

I haven’t seen this movie, but your review seems reasonable. I do have to question why you fault RBG’s cameo at the very end. I don’t see how that hurt the movie.

Johnny Angell said:
I haven’t seen this movie, but your review seems reasonable. I do have to question why you fault RBG’s cameo at the very end. I don’t see how that hurt the movie.
Click to expand...

It is an overdone cliche in biopics.

Todd Erwin said:
It is an overdone cliche in biopics.
Click to expand...

Yeah, but I liked that scene and so did the audience in which I saw the movie with as there was a positive reaction to it.
Reactions: Johnny Angell

Robert Crawford said:
Yeah, but I liked that scene and so did the audience in which I saw the movie with as there was a positive reaction to it.
Click to expand...

I also don't see the problem. I don't see it as a cliché either. I see absolutely nothing wrong with showing the person the movie is about at the end of the movie. My gut feeling is the criticisms of the movie stem from another place.

Robert Crawford said:
Yeah, but I liked that scene and so did the audience in which I saw the movie with as there was a positive reaction to it.
Click to expand...

RBG's cameo was the best part of the movie - by a wide margin!
You must log in or register to reply here.

And Everything Is Going Fine Blu-ray Review 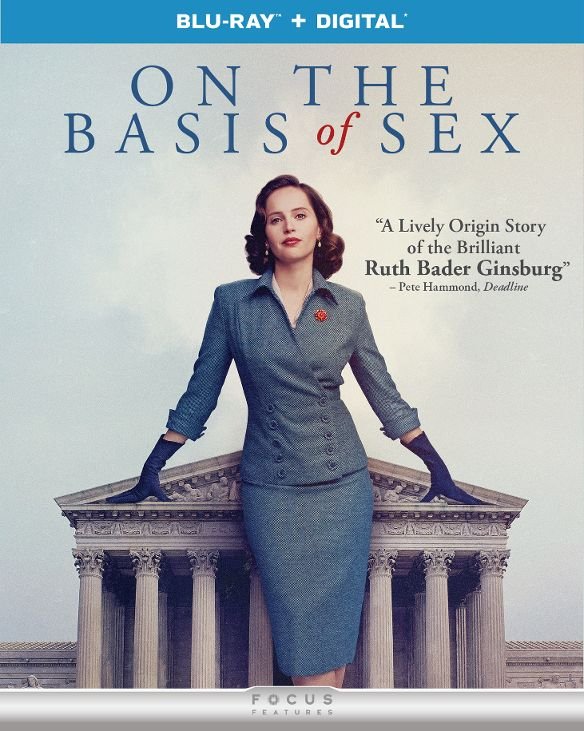