Posted on June 26, 2016 by Matt Hough
A stagy farce comes uncomfortably to the screen. 2.5 Stars

Oh, Men! Oh, Women! offers a star lover’s dream cast, but the merriment contained when three former suitors for the same girl lay their cards on the table seems forced and mostly unsatisfying.

In 1957, Twentieth Century Fox produced two films that focused on psychoanalysis, both coincidentally directed by Nunnally Johnson: a drama The Three Faces of Eve and a comedy Oh, Men! Oh, Women! The drama led Joanne Woodward to an Oscar and the first of a long career of acclaimed, often Oscar-nominated performances. The comedy did no favors for its starry cast: neither Dan Dailey, David Niven, Ginger Rogers, Barbara Rush, nor Tony Randall emerged from this fiasco with acclaim, their over-broad playing and the contrived, irritating script and characters sinking even great talents such as theirs. Seen today, Oh, Men! Oh, Women! is even less appealing (alcoholism today is anything but amusing), a clear sign that star power was beginning to count for very little in Hollywood when the script is lacking and the direction leaden.

Psychoanalyst Dr. Alan Coles (David Niven) is seeing his last day of patients before embarking on matrimony for the first time with bubble-headed Myra Hagerman (Barbara Rush) and a three-month honeymoon cruise. But he learns on this day before he’s about to sail that Myra had formerly been a part of very sticky relationships with the alcoholic actor-husband (Dan Dailey) of his patient Mildred Turner (Ginger Rogers) and wacky, irrational Grant Cobbler (Tony Randall), both of whom describe her as a destroyer-of-men. Alan is disturbed because Myra had never previously mentioned her relationships with either of the two men even though she was once his patient and the relationships had been fraught with angst for all parties concerned. So, when he goes to confront her about the men, he’s surprised to find Arthur Turner drunk in her apartment and Grant Cobbler knocking on her door demanding to gain entrance. His angry handling of these very convoluted situations convinces Myra that perhaps Alan isn’t the perfect man for her, and she begins to have second thoughts about their impending wedding.

Producer-director Nunnally Johnson’s script has basically plopped the original Edward Chodorov comic farce from the Broadway stage (where it ran a bit less than a year) right in front of the Cinemascope cameras with only a few changes of venue but with all of the talk and outrageous plot machinations (the three men all have the one woman in common, the three men wind up at the same New York bar after their angry confrontation at Myra’s, people don’t take “no” for an answer) front and center. The problem is that the talk isn’t very witty or amusing, and the characters are all singularly infuriating, whining about their comfortable lives and their significant others not measuring up to their own lofty (and unreachable) standards while behaving nothing like people of their mature years should be behaving. Cinemascope was a good decision for filming since a goodly portion of the movie has various characters in repose as they discuss their problems with their analyst (who’s always at the ready with tissues and a soft shoulder on which to lean), but Nunnally Johnson hasn’t done much in terms of animated staging of the action leading to a very leaden second half in Myra’s apartment as the three important men in her life converge to have it out while she heckles from the sidelines.

The cast features a quintet of truly great actors, but they’ve all been allowed to play to the rafters with these frustrated screwballs (David Niven shows the most restraint, but even he goes overboard on a couple of occasions to match the hamminess of those he’s playing opposite) resulting in scenes that are so over-the-top that any humor is lost and one only bemoans the desperation they’re all displaying in trying so hard to be light and funny. Dan Dailey has been given a fantasy sequence where he gets to overact to his heart’s content as the devil in one of Ginger Rogers’ flights of fancy on the analyst’s couch (naturally she’s portraying herself as an angel complete with a silver halo). But the worst offender is Tony Randall who plays Grant Cobbler as a near-psychopath without any restraint and totally lacking in humor (Randall in later years admitted that he needed a strong director to rein him in or he tended toward overacting; Nunnally Johnson obviously didn’t give him what he needed to pare back his performance to character from caricature). In smaller roles, Natalie Schafer gets things off to a nice start as a devotedly dry, droll patient of Dr. Coles while the great Franklin Pangborn has a marvelous scene at the travel agency where he shows everyone how to play comedy with subtle facial gestures that can bring down the house.

The film’s original Cinemascope theatrical aspect ratio of 2.35:1 is faithfully rendered in an anamorphic transfer that’s been enhanced for widescreen televisions. This is one of the best of the Fox Cinema Archive Cinemascope releases with very good sharpness throughout and rich, deep color that’s controlled but very saturated. If there are occasional moiré patterns in the office curtains and some blacks that seem a little milky rather than inky, the transfer features a clean image without dust specks or scratches. The film has been divided into chapters every ten minutes so this disc contains 10 chapters.

The Dolby Digital 2.0 sound mix offers all of the dialogue in clean, decipherable fashion. Cyril Mockridge’s playful score (which draws on strains from Love Is a Many Splendored Thing any time Myra is in a romantic mood) and the atmospheric effects are all presented with no telltale encoding problems. The volume level is a trifle loud and should be adjusted downward somewhat, but the volume level is not as over-pitched as in many of the Archive releases.

Oh, Men! Oh, Women! offers a star lover’s dream cast, but the merriment contained when three former suitors for the same girl lay their cards on the table seems forced and mostly unsatisfying. The Fox Archive DVD-MOD, however, is one of their best efforts with an anamorphic Cinemascope transfer that’s clean and beautifully sharp and colorful. 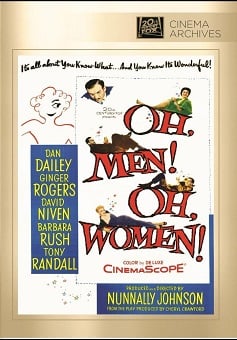