It’s the sweet, uncomplicated critters versus mercenary mankind in Cal Brunker’s The Nut Job 2: Nutty by Nature, a frenzied, almost hyperactive comic animated adventure. Barely taking a minute catch its breath and filled with agitated action, The Nut Job 2 is an exhausting family comedy, complete with talented vocal artists and some interesting design elements done on an obviously medium-sized budget that limits the numbers of sets and characters in the foreground and background.

Purple squirrel Surly (Will Arnett) and his pals have taken over a bankrupted nut shop whose owners have left behind a storehouse of wares and are having the time of their lives. But a faulty boiler in the basement destroys the shop and their utopian pleasures, and they now find themselves once again having to fend for nuts in their real home Liberty Park. But the malicious town official Mayor Muldoon (Bobby Moynihan) plans to bulldoze Liberty Park and replace it with Libertyland, an amusement park. Surly, his mute best friend Buddy, gal pal Andie (Katherine Heigl), slobbery pug Precious (Maya Rudolph), and the other park residents try to band together to stop the destruction of their home, but the persistent mayor along with his spoiled daughter Heather (Isabela Moner) and a ruthless construction foreman Gunther (Peter Stormare) are formidable adversaries, making Surly realize he’s got to bring in outside help if they’re going to have any chance of reclaiming their home.

Director Cal Brunker along with Scott Bindley and Bob Barlen concocted the screenplay that’s actually rather short on plot but filled with frenzied action set pieces like the orgy of nut consumption in the nut shop which opens the movie and then follows up with the park critters creating havoc with the construction workers in their first attempts to stop the destruction. Surly gets into a scrap with city mouse Mr. Feng (Jackie Chan) who threatens his weapons of “mouse destruction” on the town if he and his minions are bothered (they’re bitter because their park on the north side of town was bulldozed to make a golf course), but, naturally, it’s the same Mr. Feng who will provide the final muscle in the creatures’ war with the humans. There are other occasional gags that work (Andie’s stubborn insistence on nut gathering the old-fashioned way, Precious’ tendency to lick her friends remains amusing throughout) but one in particular that’s rather gross and unappealing (a regurgitation courtship ritual between Precious and her new amour Frankie (Bobby Cannavale) is an unappetizing moment). And the ending of the film is never really in doubt even when the animators attempt to craft some drama into their story with an injury to the sweet, simple Buddy.

The best performances belong to Maya Rudolph as the over-affectionate Precious and Bobby Cannavale’s smitten Frankie, both individually and together forging characters that engage and endear us to them. In contrast, Will Arnett and Katherine Heigl are efficient but unremarkable as the film’s two leading players. Bobby Moynihan as the redneck crooked politician Mayor Muldoon is stereotypically ruthless and money-grubbing, and his loud, obnoxious daughter Heather voiced by Isabela Moner is similarly one-note. Jackie Chan makes a fun bitty white mouse who packs a powerful punch while Peter Stormare gets to show both menace and cowardice as the threatening foreman Gunther.

The film’s theatrical aspect ratio of 1.85:1 is faithfully rendered in 1080p using the AVC codec. Sharpness is consistently present for as much detail as these animated characters and backgrounds can offer, and color is wonderfully deep and impressive, too. Black levels are gorgeous in their depth and richness. The movie has been divided into 20 chapters.

The DTS-HD Master Audio 5.1 sound mix provides all the surround envelopment one might expect from a mid-budget level production. Heitor Pereira’s background music is a consistent part of the aural design and is threaded through the fronts and rears with surety. Dialogue has been excellently recorded and has mostly been placed in the center channel with one superb example of directional dialogue that floats around the soundstage to wonderful effect. Atmospheric sounds likewise get full placement in the appropriate soundstages, and the nut shop explosion and the flashback where Surly describes his first meeting with Buddy during a hurricane provide excellent surround opportunities and good use of the LFE channel.

Audio Commentary: director Cal Brunker and producer Bob Barlen, both of whom also wrote the script, describe the three-year journey to bring the movie to the screen. Brunker does the majority of the talking, but both speak well of working with the cast in individual recording sessions and discuss the changes that were made along the way to end up with the final product.

Animation Progression Reels (3:56, HD): a four-way split screen showing the four individual stages of work from storyboard through previz, animation, and lighting and effects with two scenes from the movie: the hurricane sequence and the Mr. Feng’s Fight Suit sequence.

Concept Art Reel (2:56, HD): a montage of animation drawings picturing the characters in the movie.

Promo Trailers (HD): Duck Duck Goose, Despicable Me 3, Spirit, Mune, All I Want for Christmas Is You.

The Nut Job 2: Nutty by Nature, like its predecessor, is an average bit of family entertainment: not overly ambitious, not outrageously funny, and not memorable in any way, but it’s good enough for a pleasant time passer and certainly looks and sounds wonderful on this Blu-ray release. 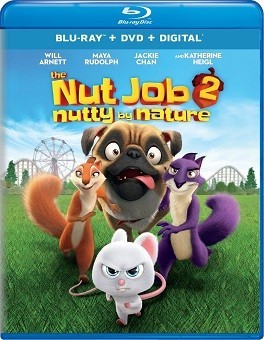