Forum List What's new Dark Style Change width
Log in Register
What's new Search
Menu
Log in
Register
Navigation
Install the app
More options
Dark Style
Close Menu
Posted on November 18, 2019 by Matt Hough
You are using an out of date browser. It may not display this or other websites correctly.
You should upgrade or use an alternative browser.
Prime classic Hollywood at its best 4.5 Stars

A great movie melodrama from the Golden Age of Hollywood, Irving Rapper’s Now, Voyager is one of the jewels in the Warner Brothers treasure trove of memorable films.

The zenith of Bette Davis’ unmatched career at Warner Brothers came with her 1942 melodrama Now, Vogayer, a taut and engrossing tale of a repressed woman finding inner strength and resolve to make an independent life for herself after years of being a downtrodden and humiliated humbug to her high-toned Boston family. Irving Rapper’s direction, the classy production values, a supporting cast of vivid distinctiveness, and a star blazing at the brightest apex in her orbit make Now, Voyager one of the prime dramas of Hollywood’s Golden Age.

Boston heiress Charlotte Vale (Bette Davis) is a neurotic mess on the verge of a nervous breakdown, largely because of her cold, domineering mother (Gladys Cooper). But after a stint in a sanatorium where she receives the attention of kindly and understanding Dr. Jaquith (Claude Rains), Charlotte comes out of her shell and elects to go on a South American cruise. Aboard ship she meets Jerry Durrance (Paul Henreid), and the two fall in love, despite his being trapped in a loveless marriage. They enjoy five days in Rio before returning to the States where Charlotte struggles to forget him and forge a new life for herself independent of her authoritarian mother.

Casey Robinson’s marvelous screenplay adapted from the novel by Olive Higgins Prouty forges an easily identifiable roadmap to Charlottte’s neuroses and the stages in her ultimate recovery, and Irving Rapper’s distinctive direction takes us along every step of the way allowing us to suffer along with Charlotte’s struggles and share in the triumphs as she manages every day to gain confidence and authority in dealing with both the world and her own misguidedly low opinion of herself. Rapper’s introduction to the spinsterish Charlotte focuses on her ugly orthopedic oxfords and baggy stockings before moving up to show us her old-fashioned print dress and heavy eyebrows, and he later chicly repeats the introduction to the newly svelte and stylish Charlotte in her most becoming two-toned high heels, slim silk-stockinged legs, and elegant wardrobe, later allowing costume designer Orry-Kelly to go all out in presenting Davis in the most fashionable clothes she was ever to enjoy in a movie. The movie being produced during the height of the Production Code, Jerry and Charlotte’s five-day affair in Rio is handled with utmost discretion as we watch the two slide easily into love, and this handling of romance carries through throughout the movie. Some find the later sequences as Charlotte nurses Jerry’s neurotic child Tina (Janis Wilson), a clear parallel to her own earlier problems with her cold, unloving parent, a bit at odds with the tone of the rest of the film, but those sequences are necessary to bring the love story of Jerry and Charlotte full circle.

Nominated for the Best Actress Oscar, Bette Davis clearly deserved the prize for what many consider her greatest performance, a sublime show of her versatility transforming outwardly and inwardly from a belittled underling to a vibrant, hearty young woman with the world at her feet. As her ever-knowledgeable and understanding psychiatrist Dr. Jaquith, Claude Rains makes a superb foil for Davis’ early problems and later enthusiasms. Paul Henreid is a gentle and loving romantic figure for Davis as Jerry Durrance while Ilka Chase and Bonita Granville are a most convincing mother-daughter pairing as Charlotte’s acerbic but ultimately caring relatives. Gladys Cooper makes an unforgettable impression as Charlotte’s gorgon mother, spiteful and full of haughty displeasure at a daughter who can do nothing to please her. In smaller roles, Franklin Pangborn is most entertaining as the ship’s purser, Mary Wickes gets a lot of mileage out of her dynamic nurse Dora Pickford, and Lee Patrick has a couple of good scenes as a shipboard acquaintance of Charlotte’s who fills her in on Jerry’s unhappy marriage. John Loder is woodenness personified as Charlotte’s stuffy fiancé Elliot Livingston.

The film’s original theatrical 1.37:1 aspect ratio is faithfully presented. Taken from a 4K digital transfer, the standard definition image is solid as a rock with no problems handling the tweed suits and striped shirts and ties that make up much of the wardrobe in the movie. Grayscale is excellent with bright, clean whites and rich black levels. A couple of rampant and noticeable hairs have not been digitally scrubbed, but otherwise there are no signs of age-related scratches, dirt, or debris. The movie has been divided into 19 chapters.

The Dolby Digital 1.0 sound mix is typical of its era, but the presentation is first-rate. The sound is clear and strong throughout with dialogue that is crystal clear and which has been mixed dynamically with Max Steiner’s Oscar-winning score and the various sound effects. There are no problems at all with hiss, pops, flutter, and crackle.

The film and the first interview are on the set’s first DVD. The rest of the bonuses are on a second DVD in the case.

Bette Davis Interview (53:35): the star spends almost an hour solo with Dick Cavett in 1971 discussing many aspects of her life and career in a lively and entertaining interview that’s worth multiple views.

Farran Smith Nehme Interview (31:19): the film critic offers a brief bio of star Bette Davis and then presents a video analysis of the movie.

Larry McQueen Interview (10:56): the costume historian discusses the importance of designer Orry-Kelly’s costumes in assisting Bette Davis in establishing her character amid dramatic changes throughout the movie.

Enclosed Booklet: in addition to information on the cast and crew and the audio and video transfer, the booklet offers 33 pages of stills, an essay on the movie by scholar Patricia White, and a 1937 reflection on her perception of her job as an actress by Bette Davis.

A great movie melodrama from the Golden Age of Hollywood, Irving Rapper’s Now, Voyager is one of the jewels in the Warner Brothers treasure trove of memorable films. Because their quantity of review product was low, Criterion could only offer me their DVD package for review, but even in standard definition, the film’s luminous cinematography shines beautifully, and the package is abetted with a strong selection of worthwhile and interesting bonus material. Highly recommended!

I like Bette in all her films (not that I like all of her films themselves), but this is my favorite. I have the blu on order. Can't wait.

Terrific review, Matt. I am ashamed to admit I have never seen this film before but I have it pre-ordered via Barnes and Noble's current 50% Criterion sale.

It is one of the GREAT character studies of a woman finding herself and coming into her own. I'm always so impressed with the production after each viewing.
You must log in or register to reply here. 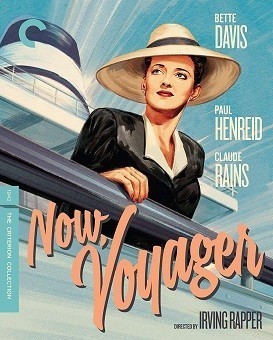