If you’ve been collecting physical media and redeeming the included digital copy codes, then you are likely aware of the movie rewards programs offered by three of the studios – Disney (which now includes Fox), Sony, and Universal. How do they compare to one another?

Formerly Disney Movie Rewards, the program was revamped and relaunched on September 26, 2019 as Disney Movie Insiders. As before, Disney (and newer Fox) DVD, Blu-ray, and UHD Blu-ray releases will have a code inside that you can redeem for points in the rewards program. Back in the DMR days, you could redeem your points for physical rewards such as other Disney DVDs, Blu-rays, and UHD Blu-ray, but also collectible merchandise like pins, soundtrack CDs, posters, etc. After the transition to DMI, physical rewards were for the most part discontinued, at least temporarily (so we were told), and that they would return in the near future. Most of the redeemable rewards were of the virtual variety, such as downloadable artwork such as wallpaper, e-gift cards for the Disney Store, premium D23 memberships, and exclusive private studio tours. The current pandemic caused Disney to discontinue their private studio tours and delay the relaunching of physical reward items. If you connect your Movie Rewards account with DMI, any movies purchased or redeemed through the service will now automatically be applied as points on DMI. You can also upload your ticket stubs during the first two weeks of a movies release to earn additional points (or connect your Fandango and/or Atom tickets account).

Sony’s rewards program has been around for several years, allowing you to earn points not just on Sony movie purchases and theater tickets, but on Sony products as well. Membership can be tricky if you do not have a “standard” e-mail address (such as Gmail, Yahoo, Hotmail, etc.), as many users with private or commercial email domain addresses have been deemed ineligible for membership in the program. Points earned can then be redeemed for gift cards at various retailers or for Sony merchandise. Physical media purchases can also be redeemed not only for points, but also towards a free Sony movie (or 4k upgrade) on Movies Anywhere when you register five movies as part of the Movie Buff Pass program using the mobile app. The Movie Buff Pass, though, is one of many problems with the rewards program, as not all movies are eligible, with many movies appearing to be eligible based on the description of the program on the reverse side of the Movies Anywhere code. For example, the recent Columbia Classics 4K Ultra HD Collection boxed set contained six Movies Anywhere codes (one for each movie in the set) and instructions for the Movie Buff Pass rewards program was printed on the reverse, however only three of the codes were eligible for redemption. This has been a sticking point since the Movie Buff Pass program was initiated several years ago, with Sony Rewards customer service simply stating “This disc is not eligible for registration. Please browse the list for eligible discs.” 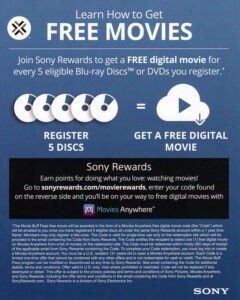 Another sticking point is the slow rotation of available free titles in the program once you complete a pass, sometimes taking up to nine months for new titles to appear. Is someone giving birth to these free movies? Nearly all redemptions and registrations can only be completed on the mobile app, which is often buggy, sometimes requiring a new installation for it to work.

Universal also just revamped and rebranded their rewards program. What was a simple and basic program where you could redeem a code (or upload a receipt) to receive a free code to a Universal movie on Movies Anywhere along with points that could be used to enter a contest for a free American Express Gift Card has now evolved to a website that has a bit more style, transitioning to a point system where you can earn points by redeeming codes from movie inserts, upload receipts from movie purchases, link your rewards account with Movies Anywhere to receive points for digital purchases, enter contests, view trailers and other videos, etc. Points can then be redeemed for downloadable activity sheets, digital coupons at GRUV and Digital Movie Deals, and free movie codes, with physical rewards like signed movie posters and scripts, DVDs, Blu-ray, and even UHD Blu-rays coming soon (the website currently has rewards like Fast & Furious 4K UHD Collection and The Big Lebowski Limited Edition Collector’s Set 4K UHD greyed out with a splashy Coming Soon imposed over them). The previous rewards program was usually very good at rotating their free movie titles every 3-4 months, but they were often limited to five or six movies, the majority consisting of direct-to-video titles with one or two classic or well-known movies. At present, the free movies include Being Flynn, Cop and a Half, Hyde Park on the Hudson, Mystery Science Theater 3000: The Movie, and Along Came Polly by redeeming 1,000 points for each title. The good news is that validated rewards codes from Blu-ray and UHD Blu-ray titles will currently net you 1,200 points, which works out to a free digital movie plus 200 points. 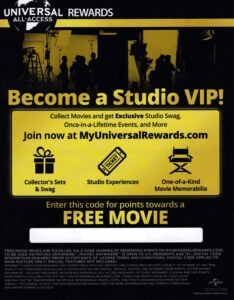 Customer Service for Universal’s rewards program is the best of the three, often responding within three business days with a solution to your issue. In fact, just recently, my rewards code for the recent The Invisible Man was not being accepted by the new program. One email and three days later, customer service sent me a new code. Now that is what I call customer service!

While all three rewards programs are somewhat crippled due to the current pandemic with the suspension of shipping physical rewards (in the case of Sony, delayed and extended shipping times), one can hope that as we return to some sort of normalcy that those rewards will return. Or at the very least, Disney will follow both Sony and Universal’s lead and offer free Movies Anywhere codes.

Yeah, I used to use the Disney program when they offered discs, but haven't bothered since they got rid of them.
Reactions: Osato

Malcolm R said:
Yeah, I used to use the Disney program when they offered discs, but haven't bothered since they got rid of them.
Click to expand...

I took advantage of their "clearance sale" just before the revamp. The have frozen expiration dates on points for the time being, thankfully.
Reactions: Osato

I still enter the Disney points when I get codes out of habit, but I agree with others here. The unnecessary revamp has made it essentially a useless program. I haven't seen anything I wanted to redeem since the changeover. This is ironic because I now have the largest amount of points I've ever had at any one time and nothing to spend them on.

Prior to the current freeze, Disney points only expired if you didn't enter any codes for a year. That has never been an issue for me because I would never go a whole year between buying Disney discs anyway.
Last edited: Jul 9, 2020
Reactions: B-ROLL, Osato, Todd Erwin and 1 other person

Jake Lipson said:
I still enter the Disney points when I get codes out of habit, but I agree with others here. The unnecessary revamp has made it essentially a useless program. I haven't seen anything I wanted to redeem since the changeover. This is ironic because I now have the largest amount of points I've ever had at any one time and nothing to spend them on.

Prior to the current freeze, Disney points only expired if you didn't enter any codes for a year. That has never been an issue for me because I would never go a whole year between buying Disney discs anyway.
Click to expand...

Even if you didn't buy discs there usually are a couple sets of free points every month as well.

Usually reall and made up holidays, a couple hundred points in December, the monthly newsletter usually gives 5 points and you don't even hae to subscribe to the newsletter. So far the link has been identical for nearly a year - just click through the link and signin to your account for point.

It's usually activated it seems randomly around the middle of the month (10-20th) and will redeem once until it resets on the 1st of each month. In May it was the 2nd though that seems to be a fluke and was a week earlier than it had ever activated, June it was the 16th which is more typical, and July hasn't gone live yet.
If you click before it's activate during a month you'll get a Newsletter Error message.
Reactions: Jake Lipson

The freebie code DISNEYHITS is now active and worth 20 points. One redemption per member.
Reactions: Todd Erwin and David Norman

Universal is offering 50 free bonus points to new members of their Universal Rewards All Access. No code required.

The Sony Program seems to be one of the better programs for now. At least you can accumulate movies (digital only now) with them and points which later can be used for Gift Cards or other items. If you have a Sony CoBranded CC, the purchases also give rewards points. Every year or two I've ended up with $25 or even $50 in Gift Cards.

Register 5 qualified titles in their Movie Buff App and get a code for a Digital Copy chosen from a select group of titles. Disc registration is done with the Digital Code sheets that came with the movies. This is separate from the actually digital redemptions
First disc registered get a Newbie Award which gets your first digital code and each registration is worth 45 points.

Downside -- not all Sony/Columbia codes qualify for registration and the redemptions are somewhat limited though do change every few months.
It's smartphone app only now. The PC version was canned a few months ago.
Limited to 10 disc registrations per month
Limited to 24 Movie Buff Passes per account (basically 25 free movies).

Upside -- the choices now include several UHD digital copies.
You're supposed to be limited to 1 account, but many people who have maxed out have registered a new account email and started over. So far nobody has been suspended or cancelled

Originally the allowed Bluray Rewards, then added a few Digital only, then went digital only.
Each time the program has changed it seems they reactivate many of the codes so I've registered the same code 3 or 4 times over the years.


The current list of redemptions include. Normally there have been 20-25 choices, but when they added the 4K rewards the number of rewards dropped substantially. Hopefully this is temporary b/c I'm pretty much down to a couple options again.
All the Money in the World 4K
Alpha 4K
Anger Management
Brightburn 4K
Escape Room 4K
Hotel Transylvania 3 4K
MiB International 4K
Slender Man 4K
Spider-man Far From Home 4K
Surfs Up
The 6th Day
The Angry Birds 2 4K
The Night Before 4K
The Star 4K
White Boy Rick 4K
You must log in or register to reply here.
Share:
Facebook Twitter Reddit Pinterest Tumblr WhatsApp Email Link