An arresting if not totally successful western comic lark 3 Stars

A decidedly offbeat change of pace for star Charles Bronson, Frank D. Gilroy’s From Noon Till Three works in fits and starts, a love story that passes into legend with some unquestionably nasty aftereffects.

A decidedly offbeat change of pace for star Charles Bronson, Frank D. Gilroy’s From Noon Till Three works in fits and starts, a love story that passes into legend with some unquestionably nasty aftereffects. The comedy doesn’t always work here; Charles Bronson doesn’t have natural comic timing or a gift for transforming his typical nonchalant acting style into comic gold, but the film offers more than a few surprises and features a lovely theme and the beautiful Jill Ireland in a fine performance.

When a lame horse prevents outlaw Graham Dorsey (Charles Bronson) from participating in the robbery of the bank in Gladstone City with his fellow members of the Buck Bowers gang, he holds up with widow Amanda Starbuck (Jill Ireland) in perpetual mourning for her husband now two years dead. Buck (Douglas V. Fowley) tells Graham they’ll be back in three hours giving the wily outlaw time to romance the widow and for the two to fall in love and make plans for their future together. When word comes that the bank heist was unsuccessful, Amanda insists Graham be chivalrous and attempt to rescue his friends from hanging, but Graham, having been given a taste of normal life away from being hunted for misdeeds, has no intention of attempting a rescue. Fate intervenes, however, changing the futures for both Amanda and Graham in ways they could never have expected.

Pulitzer Prize winner and Tony-winning playwright Frank D. Gilroy directs his own screenplay adapted from his novel, and it begins with a Twilight Zone­ worthy opening sequence that alerts the viewer that the narrative ahead is going to be anything but straightforward. Afterwards, surprises abound with near-rapes and a battle of the sexes that the lovely Ireland seems more than equipped to handle against the strappingly fit Bronson. The screenplay demands dramatic license from the viewer (Amanda doesn’t recognize great love Graham after a year away behind merely glasses and a Lincoln beard?) that makes some of the film’s second half sometimes an eye-rolling chore, but the budding romance between the pair in the early going is really lovely, and the husband and wife stars certainly have a chemistry that can’t be forced. The story kind of falls apart as it draws to its conclusion: there’s no grieving that one might expect to the events as they go down, and with his new training in banking achieved from serious study during his time in prison, the world could have been his oyster with a new identity (much easier to accomplish back then than it would be today). Gilroy’s direction seems to favor overhead shots (there are a lot of them) but otherwise is smooth and engaging, and some of the satire in the later reels with Amanda’s home turned into a kind of museum for the second time in her adult life isn’t lost on the viewer.

Kudos to Charles Bronson for trying something different, especially since the movie seemed at first to be merely a run-of-the-mill western with a gang in hiding after a bank job gone wrong. He doesn’t do anything especially creative with his frustrated attempts late in the movie to recapture his own identity, but it’s a notable effort nonetheless. Jill Ireland is beautiful in a succession of Moss Mabry gowns that show off her trim figure but never let us forget underneath that there is a will of iron residing there. Douglas Fowley is effective as the head of the Bowers gang, and Stan Haze, Damon Douglas, and Hector Morales abet well as fellow gang members. William Lanteau has some nice moments as the Reverend Cabot, and Bert Williams gets the job done as the local sheriff on the trail of the gang’s missing member. Two other famous faces pop up for cameo bits: Anne Ramsey as a townswoman first antagonistic and then understanding about Amanda’s plight, and Don ‘Red’ Barry as one of many who don’t believe Graham’s story.

The film is presented in its theatrical aspect ratio of 1.85:1 and is offered in 1080p resolution using the AVC codec. As with many MGM transfers, the opening credits are soft and excessively dirty, but things clear up nicely as the film plays. There are still stray dust specks here and there throughout the presentation, some annoying flicker in a few shots, and skin tones which often go too rosy for comfort. Otherwise, color is solid and appealing. Contrast apart from a few specific instances is consistently applied, and black levels are very nice. The movie has been divided into 24 chapters.

The DTS-HD Master Audio 2.0 mono sound mix is typical of its era with dialogue well recorded and combined with surety with Elmer Bernstein’s lovely score (the “Hello and Goodbye” theme song, sung on several occasions in the movie and late in the film by Jill Ireland, is quite haunting and a wonderfully appropriate comment on the romanticized encounter at the core of the story) and appropriate atmospheric effects. There’s a bit of hiss in one specific moment but otherwise the soundtrack seems agreeably free of irritating aural artifacts.

Six-Page Booklet: contains some color stills, original poster art on the back cover, and film historian Julie Kirgo’s enlightened analysis of the movie.

From Noon Till Three is a change of pace western comedy from Charles Bronson, sometimes a bit off-kilter and tatty, but it’s a more than agreeable way to spend an out-of-the-ordinary one hundred minutes. There are only 3,000 copies of this Blu-ray available. Those interested in purchasing it should go to either www.twilighttimemovies.com or www.screenarchives.com to see if product is still in stock. Information about the movie can also be found via Facebook at www.facebook.com/twilighttimemovies. 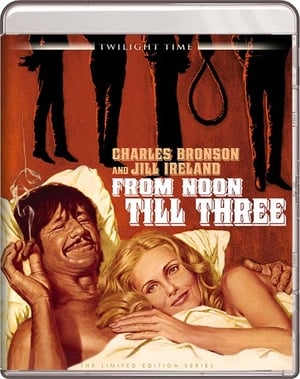