Forum List What's new Dark Style Change width
Log in Register
What's new Search
Menu
Log in
Register
Navigation
Install the app
More options
Dark Style
Close Menu
Posted on December 30, 2018 by Sam Posten
You are using an out of date browser. It may not display this or other websites correctly.
You should upgrade or use an alternative browser.
My suspicions were correct. You’re clinically dumb. 3.5 Stars

(NOTE! Portions of this review are sourced from Tim Ewanshyn’s HTF review of the 4K version of Night School, found here:
https://www.hometheaterforum.com/night-school-4k-uhd-review/ )

Night School features Kevin Hart as an adult who goes back to high school in pursuit of his GED so that he can keep the girl of his dreams. This comedy misses the mark more often than it hits, but may have enough moments for fans of Kevin Hart and Tiffany Haddish(Girls’ Trip). 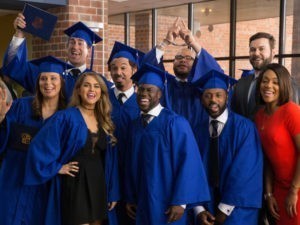 Kevin Hart plays Teddy, a motor-mouth hustler finding himself out of a job after a marriage proposal gone horribly awry. Teddy’s fiancée Lisa (Megalynn Echikunwoke) does not care that she earns more money than Teddy, but this fact bothers Teddy. Teddy has the opportunity to move up in the job world, but only if he graduates from high school. Teddy’s pride causes him to conceal his attendance at night school from his fiancée, which predictably leads to misunderstandings between them before the denouement.

Teddy finds that his teacher at night school is Carrie(Tiffany Haddish), a person he has already alienated before his arrival at night school. The bigger impediment to Teddy’s graduation is Stewart(Taran Killam), a former high school classmate, now principal of the school, with a score to settle against Teddy. Teddy finds himself thrown in with an eclectic mix of misfits in night school played memorably by Mary Lynn Rajskub(24) and Rob Riggle(The Daily Show), among others.

Teddy’s classmates are broadly drawn with their own personality quirks and backgrounds in an effort to provide a richer story and characterization for its principals. Ultimately, one is left wanting to see more of the other members of the class, but the potential for developments with the night school students remains unexplored and unfulfilling, much as Teddy’s efforts at self improvement never leave the outcome in question. Multiple screenwriters are credited with the screenplay, and the screen story give the impression of writing by committee, even though it is equally possible that each of the credited screenwriters provided their own treatments, with the final product being a patchwork of their contributions. Hart and Haddish are given a few moments for sparks to fly between them, but these moments are somewhat underdeveloped, other than their initial meeting before Teddy’s attendance in Night School. Night School has a great cast of actors, which also includes Keith David(The Thing) and Ben Schwartz(Parks and Recreation). One wishes that such a fine collection of actors were given better material in which to perform together. 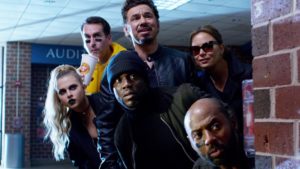 Night School appears on Blu in its original 2.39:1 aspect ratio. This Bluray version is sharp, colorful and devoid of any artifacts, ringing or other distracting elements. Efforts to present it in the absolute highest quality in 4K UHD HDR were effective here in this downrezzed presentation. Shadow detail and color balance are spot on, and very pleasing, even during the night time ‘caper sequence’. 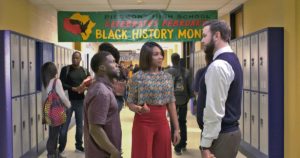 The Bluray audio tracks are identical to those on the 4K UHD, which is a nice surprise as many Blus only have lesser tracks. English audio is presented on the Blu disc in DTS:X or Dolby Digital 2.0. The DTX:X English audio provides a rich aural experience. Although this is not the type of film with extensive directional audio, the sound mix provides audible dialogue with soundtrack music never obscuring the clarity of dialogue. The French audio is French Canadian DTS-HD 7.1 High Resolution Audio. Spanish is presented as Latin American Spanish in DTS Digital Surround 5.1.

Sam adds: Specific sound effects do come from all corners, and despite being a narrative driven comedy the use of DTS:X is welcome, fun and effective. The prom dance sequence makes great use of the sound stage for music, and a misadventure early in the movie makes good use of the rumble in your system. 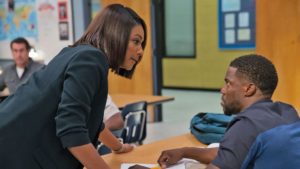 This package includes a Blu-ray disc and a DVD. All extras were tested on the Blu. The special features include all of the following:

Alternate Opening(6:29): With or without commentary by director Malcolm D. Lee.

Deleted Scenes(13:27): With or without commentary by director Malcolm D. Lee.

Night School’s In Session(13:33): Cast talk about their roles in the film.

Who’s the Student? Who’s the Teacher?(2:33): Kevin Hart and Tiffany Haddish talk about their professional history together before appearing in the same film together for the first time in Night School.

Prom Night Revisited(3:07): Cast talk about their own prom experiences in a brief featurette.

Making of the Dance Battle(3:45): The cast rehearse the dance battle at prom.

Game Over(1:46): Cast talk about the relationships between the characters played by Hart, Yvonne Orji, and Megalyn Echikuwoke.

Also included is a paper insert with validation code for Movies Anywhere to watch the film on mobile devices.

Sam says: This is an extraordinary collection of extras (Over an hour’s worth, plus multiple commentary tracks!). Even tho I wasn’t blown away with Night School I had fun watching every non-commentary minute of the extra features. 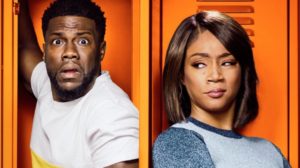 Night School is a passable comedy with an excellent cast and a screenplay that squanders the opportunities of that cast performing together. There is nothing wanting with the video and audio presentations, and the special features are generous and include 2 versions of the film as well as a director commentary, deleted scenes, and other featurettes. Ratings of quality are highly subjective, and this reviewer struggled with the rating on the film, which might have been lower but for the cast. Even if the story is fairly derivative and cliché, the cast of actors may make worthwhile viewing of Night School, depending upon whether one is a fan of Hart, Haddish, and the rest. (Sam agrees with every bit of Tim’s wrapup!)

Release day bump!
You must log in or register to reply here.