Forum List What's new Dark Style Change width
Log in Register
What's new Search
Menu
Log in
Register
Navigation
Install the app
More options
Dark Style
Close Menu
Posted on August 18, 2019 by t1g3r5fan
You are using an out of date browser. It may not display this or other websites correctly.
You should upgrade or use an alternative browser.
Cult horror favorite gets Collector's Edition treatment 4 Stars

Throughout the 1980’s, horror films that followed the “slice and dice” pattern seemed to do well at the box office; however, there were exceptions to the rule and some that tended to deviate from this pattern seemed to go largely unnoticed. Such was the case of Night of the Creeps, a tip of the cap to the monster movies of the 1950’s done in an 1980’s sensibility and style. Previously released on home video by Sony, Shout Factory has licensed the film for their Scream Factory sublabel and given it the “Collector’s Edition” treatment.

An alien experiment crashes to Earth in 1959 and its contents possesses a hapless college student who happens to come across it. Flash forward to 1986, where Chris Romero (Jason Lively) and J.C. Hooper (Steve Marshall) try to pledge into a fraternity in order for Chris to impress the girl of his dreams. When they’re tasked to find a cadaver, they come across the cryogenically frozen body of the college student and try to get it for their plans. However, they goof, and the corpse comes back to life, beginning a cycle of terror that culminates on the night of the college formal…

The only way to truly describe Night of the Creeps is that it’s a 1950’s monster movie done in the style and sensibility of the 1980’s. It’s also a movie that doesn’t make itself pretentious in any sort of way; it’s just a big ode to the classic horrors that preceded it (some of the characters are even named after classic sci-fi and horror movie directors). There really isn’t much in terms of issues with the film, except for the fact that the originally intended ending was excised in favor of a cheap scare at the end (thank goodness the original ending was restored for the director’s cut). Minor quibble about the ending aside, Night of the Creeps is still a fun and entertaining movie that wears its heart on its sleeve and makes no bones about being anything else but a great ride from beginning to end.

After appearing in several supporting and bit parts before this movie, Tom Atkins gave – perhaps – the performance of his career as the detective brought in to investigate who was some secrets from his past; it’s easy to see why this is his favorite movie out of all that he appeared in. Jason Lively is a solid lead as the awkward Chris, whose attempts to get the girl also lead him to being the hero; Steve Marshall is also likable as the friend who ends up falling victim to the “creeps”. Jill Whitlow is memorable as the girl who catches Chris’ eye, while Allan Kayser (Bubba Higgins on TV’s Mama’s Family) is notable as the head of the fraternity Chris and J.C. try to pledge into. Other notable appearances include Wally Taylor and Bruce Solomon as police colleagues of Detective Cameron, Robert Kino as the night janitor (“Screaming like banshees!”), David Paymer as the medical student who becomes a victim of the “creeps”, Vic Polizos as an incompetent coroner, Ken Heron as the college student whose possession by the “creeps” in the prologue becomes crucial in the film, makeup artists Howard Berger and Robert Kurtzman as the zombified Beta frat brothers, Suzanne Snyder in a brief bit as a sorority sister, and Dick Miller as the police arsenal officer Walter Paisley (one of many nods made to his role in A Bucket of Blood during his career).

Both the 88 minute theatrical and the 90 minute director’s cut versions of the movie – the former making its Blu-ray debut on this release – are presented in their original 1:85:1 aspect ratios in these HD transfers. Film grain is organic throughout, with some scenes showing a little softness (much of the movie was shot at night, so this is not too surprising); colors and fine details are rendered faithfully as well as a strong grey scale in the black and white sequence. There’s minimal instances of age related problems in both transfers, likely making this the best both versions of the movie will ever look on home video.

Both versions of the film come with two audio tracks: a 5.1 Surround DTS-HD Master Audio track (the default option on both versions) and a 2.0 Stereo DTS-HD Master Audio track. Both tracks have strong dialogue and sound effects along with great fidelity given to Barry De Vorzon’s electronic score; as far as range is concerned, the 5.1 tracks is a little more open than the 2.0 tracks. Either way, both tracks represents the best both versions of the movie have ever sounded on home video.

Thrill Me! The Making of Night of the Creeps (60 minutes) – Ported over from the previous DVD and Blu-ray release, this five part featurette goes over the movie from conception, filming and release to its reception as a cult favorite. Among those interviewed include director Fred Dekker, actors Tom Atkins, Jason Lively, Steve Marshall and Jill Whitlow, producer Charles Gordon, editor Michael N. Knue, composer Barry De Vorzon, and makeup artists David B. Miller, Howard Berger and Robert Kurtzman.

Tom Atkins: Man of Action (19:55) – Carried over from the previous DVD and Blu-ray release, the actor recounts his career from the early days to this movie and beyond.

Commentary by director Fred Dekker, moderated by Michael Felscher – Carried over from the Sony DVD and Blu-ray, the director goes over the movie as well as some of the influences and mistakes made during the production; a very informative track.

Commentary by actors Tom Atkins, Jason Lively, Steve Marshall & Jill Whitlow – Also ported over from the Sony DVD and Blu-ray, the quartet talk about the film as well as some of their experiences during filming; an entertaining track in comparison to the previous commentary.

Horror’s Hallowed Grounds (10:56) – Host Sean Clark revisits the filming locations of the movie, with appearances by Dekker and Lively.

Real Good Plan – Jason Lively interview (10:46) – In this new interview, the actor recalls his time on the movie as well as revealing a new morsel of information regarding a fellow cast member that wasn’t mentioned in the legacy featurette.

The Bradster – Allan Kayser interview (7:42) – The actor recounts his time during production, which involved issues with a key scene, in this new interview.

I Vote for That One – Ken Heron interview (10:12) – The actor talks about his appearance in the movie as well as an encounter he had with a fan and his family years later in this new interview.

Worst Coroner Ever – Vic Polizos interview (6:28) – The actor talks about his time in the movie as well as an issue he had during production in this new interview.

Answering the Door – Suzanne Snyder interview (4:00) – The actress talks about her brief appearance in the movie in this new interview.

Final Cut – Michael N. Knue interview (11:21) – In this new interview, the editor talks about some of the challenges in getting pacing issues resolved in the editing process.

While it wasn’t truly successful upon initial release, Night of the Creeps has had a long life as a genuine cult classic. Shout Factory has done a great job in bringing out both versions of the film with new and legacy special features included in a premium edition. This is now – probably – the definitive edition of the movie on home video and highly recommended for fans of the movie and cult horror. 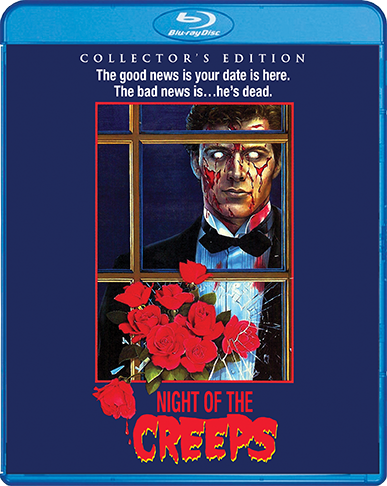