Forum List What's new Dark Style Change width
Log in Register
What's new Search
Menu
Log in
Register
Navigation
Install the app
More options
Dark Style
Close Menu
Posted on December 25, 2016 by Matt Hough
You are using an out of date browser. It may not display this or other websites correctly.
You should upgrade or use an alternative browser.
Entertaining, satisfying adaptation of DIckens' classic novel 4 Stars

One of the greatest of English language novels, Charles Dickens’ The Life and Adventures of Nicholas Nickleby comes colorfully to the screen in Douglas McGrath’s 2002 adaptation Nicholas Nickleby.

One of the greatest of English language novels, Charles Dickens’ The Life and Adventures of Nicholas Nickleby comes colorfully to the screen in Douglas McGrath’s 2002 adaptation Nicholas Nickleby. Featuring an amazing cast of actors from both sides of the Pond inhabiting wonderfully the quirky, ingratiating characters of which Dickens was a supreme creative master, Nicholas Nickleby emerges as a first-rate comedy-drama, a welcome 21st century rendering of a story already done several times in films, on the stage, and on television without losing the gist of the story or the topsy-turvy journeys of the most important of the novel’s characters.

Left penniless at nineteen on the death of his embattled father and with a mother (Stella Gonet) and sister Kate (Romola Garai) to now support, the Nickleby family goes to wealthy Ralph Nickleby (Christopher Plummer) for aid. He’s only interested in how he can exploit the family sending Nicholas (Charlie Hunnam) to work as a tutor at dastardly Dotheboys Hall where forty boys are starved and beaten by the malicious Wackford Squeers (Jim Broadbent) and his wife (Juliet Stevenson) and using Kate’s youthful charms to entice Sir Mulberry Hawk (Edward Fox.) into investing with him. Nicholas soon befriends the Squeers’ ill-treated servant Smike (Jamie Bell) and upon leaving there, the two take a brief sojourn as theater apprentices under the tutelage of Vincent Crummles (Nathan Lane) and his wife (Barry Humphries) before heading back to London where Nicholas gains employment in a counting house run by the Cheeryble brothers (Timothy Spall, Gerard Horan) and falls in love with the desperate Madeline Bray (Anne Hathaway). But Uncle Ralph is out for revenge against Nicholas’ constant thwarting of his plans and does everything he can to harm him through those he loves best.

As voluminous as most of the other famous Charles Dickens novels, Nicholas Nickleby of necessity had to be cut down to cinematic size. Writer-director Douglas McGrath has retained almost all of the important central characters in the story but has cut to the bone the early scenes of exposition of the happy Nickleby family and done less development with the Nicholas-Madeline romance than was likely needed for it to resonate more fully. Still, enough remains all around to propel the viewer jauntily from one episode to the next. As with most Dickens’ novels, it was serialized before being published in book form; that format is also very inviting for movie audiences as the sequences are always long enough to convey important narrative and character information without wearing out their welcomes. As with many Dickens works, the themes of family duty and loyalty run deep here, and the family that Nicholas cultivates along his long path to financial security and personal happiness is a loving and bracing one, helped along by the stupendous casting of fantastic, award-winning actors in all the major roles.

Charlie Hunnam is an eager-faced and satisfying Nicholas, the actor deftly portraying the character’s slowly building sense of maturing responsibility as he eventually saves his friend Smike from a horrid beating and delivers one instead to the vicious Squeers and afterwards standing up to any older man who thinks his age allows him to inflict any amount of embarrassment or intimidation on his underlings. Jamie Bell’s Smike combines his pitiful physical infirmity with the most yearning spirit and tremulous gratitude to make the character one of the film’s most poignant and unforgettable. Christopher Plummer, of course, commands the screen from his first introduction and never ceases in his incessant desire to bring down his nephew through any means possible. Tom Courtenay, Ralph’s clerk who holds the key to his employer’s downfall and works with Nicholas to see it brought about, gives one of his most comic and enjoyable performances. As for the film’s other villains, it’s hard to fault the work of any of them: Edward Fox’s sickeningly insidious Sir Mulberry Hawk, the ignorant malevolence of Jim Broadbent’s Wackford Squeers, or his perversely malicious wife played by Juliet Stevenson. Anne Hathaway is lovely but only a passable Madeline Bray, but both Nathan Lane and Barry Humphries are having a fine time as the flamboyant thespians the Crummles. And fine performances from a host of other outstanding actors including Kevin McKidd, Nicholas Rowe, Timothy Spall, and Alan Cumming give the film added depth and distinction.

The film is framed in its theatrical aspect ratio of 2.35:1 and is presented in 1080p resolution using the AVC codec. Though it is an MGM transfer, there are only the slightest of age-related specks and markings. Most of the image quality is outstanding with excellent sharpness and color that’s alternately subdued and brilliantly realized as the need arises. Skin tones are especially realistic and inviting. Black levels are truly fantastic, and contrast has been consistently applied. The movie has been divided into 24 chapters.

The DTS-HD Master Audio 5.1 sound mix offers a sterling audio experience with the dialogue well recorded and mostly relegated to the center channel (there is some most welcome directionalized dialogue). Rachel Portman’s delightful background score gets an excellent spread through the fronts and rears, and atmospheric effects while spartan are effective when utilized. There are no problems with any age-related artifacts. There is also a DTS-HD Master Audio 2.0 stereo sound mix as an alternative.

Audio Commentary: writer-director Douglas McGrath narrates a full track filled with incident and anecdote during the course of the movie.

The Cast on the Cast! (17:04, SD): each of the principal actors recall his or her impressions of working with one another recalling anecdotes from filming that stayed with each of them.

View on the Set: a multi-angle feature offering different views of five brief scenes from the movie: the London arrival, the theater performance, the kidnapping of Smike, the proposal, and the final wedding toast.

A loving and lovely adaptation of one of Charles Dickens’ classic works, Nicholas Nickleby is worthy of a new assessment almost fifteen years after its first release. It’s a first-rate, highly entertaining film of beauty and substance, and one that makes a terrific Blu-ray courtesy of Twilight Time. There are only 3,000 copies of this Blu-ray available. Those interested in purchasing it should go to either www.twilighttimemovies.com or www.screenarchives.com to see if product is still in stock. Information about the movie can also be found via Facebook at www.facebook.com/twilighttimemovies.

Thanks for the review, Matt! Since it's a limited release and one of my favorite Dickens adaptations, I bought it without waiting for reviews. I'm glad I have a quality presentation to look forward to when I get around to watching it.

After a long stretch where I could scarcely find any time for movie watching, current circumstances have forced me to slow down. Tonight was the beneficiary of those circumstances, as it provided the opportunity to finally watch this disc.

I adored this movie when I saw it at my local arthouse theater back in 2002, and I adored it again tonight -- probably more so, because themes that seemed quaintly historical that first time seemed a lot more disquietingly contemporary this time around. What a beautifully shot, beautifully acted production that takes one of the longer Dickens serials and tells it beautifully in a brisk two hours and change.

The presentation mirrored my memory of what I saw in theaters, complete with -- as you note -- "the slightest of age-related specks and markings." I'm more than happy with it.

I loved the words Douglas McGrath gave to Vincent Crummles for the closing narration: "In every life, no matter how full or empty one's purse, there is tragedy. It is the one promise life always fulfills. Thus, happiness is a gift and the trick is not to expect it but to delight in it when it comes. And to add to other people's store of it."
You must log in or register to reply here. 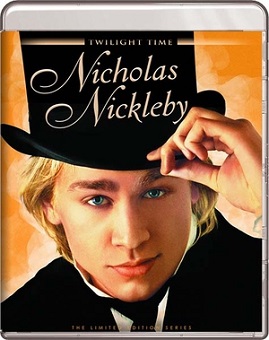