Forum List What's new Dark Style Change width
Log in Register
What's new Search
Menu
Log in
Register
Navigation
Install the app
More options
Dark Style
Close Menu
Posted on March 24, 2018 by Martin Dew
You are using an out of date browser. It may not display this or other websites correctly.
You should upgrade or use an alternative browser.

With endless at-home entertainment options, the question is often what to watch and how to watch. Many can agree that “March Madness” dominates the airwaves each spring as the NCAA’s best battle it out for the national championship. In 2017, NCAA data reported that 22.9 million televisions aired the championship game between North Carolina and Gonzaga in 176 countries world-wide, while 9.6 million streamed the event.

To feel like consumers are sitting courtside, big screens are driving bigger sales in the TV market, and the 65”-69” LCD TV segment gained nearly 40% on a year-over-year volume basis to almost 3.7 million units in 2017, according to the Consumer Technology Association (CTA). It’s not just screen size changing the game, though. The CTA forecasts that OLED TVs will grow to nearly 1 million units in 2018, and with an opportunity to beat expectations as more manufacturers enter the market and for the first time, 4K Ultra HD TVs are expected to make up half of all digital displays sold in 2018 with unit sales forecast to hit 22 million units (27 percent increase), generating $15.9 billion in revenue (14 percent increase). 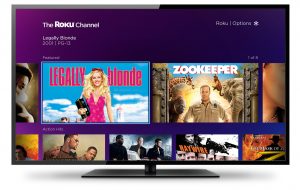 In other news, Roku has announced that its ad-supported movie and TV channel will soon be available on third-party smart TVs in the U.S. The Los Gatos-based company, which is better known for its range of video-streaming players, launched the Roku Channel last September. The content has only been available through Roku players up to this point and on TVs with the Roku operating system installed, but it will be appearing on Samsung smart TVs from this summer onwards.

Different from a previous channel launched to showcase Roku’s 4K streaming devices, the Roku Channel is the company’s first own-brand TV channel, although it will only offer licensed movies and TV shows, rather than original content. However, with Roku just emerging from an IPO late last year, some are speculating that the company may look beyond its existing business model,  which includes advertising, software licensing, and revenue-splitting, to take the step into creating original content. The Roku Channel could potentially be a convenient vehicle for showcasing some of Roku’s own programming in the future, and now that it’s coming to Samsung TVs, it will clearly have a much larger audience. Original content is likely a long way off, though, if it happens at all, so for the moment Roku will have to be content with building its brand on the back of the biggest smart TV platform globally.

Thanks Martin. I own about five Samsung TV's but had no experience with Roku until I purchased a TCL set a couple of weeks ago. So far I love the Roku experience. Is it too much to ask that the Roku channel be pushed [via software update] to existing Samsung sets or will it only be available on newly purchased units.
You must log in or register to reply here.