Forum List What's new Dark Style Change width
Log in Register
What's new Search
Menu
Log in
Register
Navigation
Install the app
More options
Dark Style
Close Menu
Posted on July 15, 2019 by Martin Dew
You are using an out of date browser. It may not display this or other websites correctly.
You should upgrade or use an alternative browser.

For silent film fans on the forum in and around the NYC area, you may be interested to see that on Thursday, July 25 at 7:00pm, Marble Collegiate Church will present a Silent Film Night, featuring two classic films, Buster Keaton’s The Haunted House, and Charlie Chaplin’s The Kid. The films will be accompanied by a live, improvised score by musician Peter Richard Conte, who is the Wanamaker Grand Court Organist at Macy’s in Philadelphia. 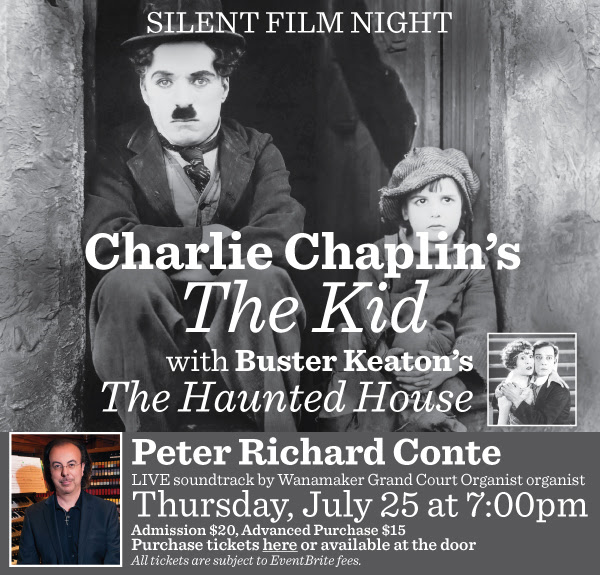 Richard Conte is also a principal organist of Longwood Gardens in Kennett Square, PA and is a collaborator and soloist with The Philadelphia Orchestra. He will begin the evening with an interpretation of “Night on Bald Mountain” from the movie Fantasia.

Buster Keaton’s comedy The Haunted House (1921) tells the tale of a robbery gone wrong and Keaton’s hapless bank clerk character falling into what seems to be a supernatural situation.

The Kid (1921) marks Charlie Chaplin’s directorial debut. In what is often called his “most perfect film,” Chaplin’s well-loved Tramp character finds himself advocating for an abandoned child, portrayed by young Jackie Coogan, later known for his role as Uncle Fester in The Addams Family. Chaplin and his cast meld humor with the characteristic gravitas that have made his movies famous.