Terrence Malick’s The New World, much like The Thin Red Line before and The Tree of Life after, breathes across the screen as a masterful demonstration of framing, music, and importantly editing. In The New World, Malick’s ode to nature and humanity is rich with stunning natural beauty and the essence of love and tragedy. With three versions of the film, the 135-minuted theatrical edition, a 150-minute ‘first cut’, and the 172-minuted extended cut of the film, each providing a unique way to become absorbed in the world he has built, this release by Criterion is the most impressive and best way to own and understand the exceptional film Malick has crafted.

“All the children of the king were beautiful, but she, the youngest, was so exceedingly so that the sun himself – though he saw her often – was surprised whenever she came out into his presence. Her father had a dozen wives, a hundred children, but she was his favorite. She exceeded the rest not only in feature and proportion but in wit and spirit too. All loved her.”

In April 1607, English settlers land on the tides of what would become known as Virginia. The crew of colonials would establish themselves in the heat and wonder of the new world, eventually making contact and trading with indigenous peoples. After a time, John Smith (Colin Farrell), granted captaincy for a mission to explore the Chickahominy River, with two members of the local tribe aboard as guides, but is eventually separated from his crew. Taken captive by a Native American hunting party and presented to Powhatan, paramount chief of the Tsenacommacah (which means “the lands”), Smith is met by initial curiosity and fascination with his appearance and his strange clothes and armor, but that curiosity gives way to the order of his death. But John Smith is saved by Powhatan’s daughter, Pocahontas (Q’orianka Kilcher). Spared, Smith forms a unique bond with the indigenous people, and a close friendship forms between he and Pocahontas.

After many months, Smith is allowed to return to the settlement, now a fort, with the promise that he and his people will leave. Smith finds the settlers in disarray – hungry, sick – and falling apart. Smith steps up as leader. Weak in the cold of winter, the settlers are near-neaten until provisions arrive thanks to Pocahontas and the tribal people. The paramount chief, Powhatan, learning that the settlers do not intend to leave, orders an attack. In the chaos, Pocahontas believes John Smith to be dead and mourns him deeply. While staying in “Jamestown”, she later meets John Rolfe (Christian Bale) and they begin a relationship where she is baptized, given an education, and more, all the while mourning the loss of John Smith.

The story of Pocahontas and her fateful meeting of John Smith has been many times told and often framed as fairytale. In many ways Terrence Malick’s poetic, realist treatment of the subject (fictionalized but factually grounded) could also be considered in that vein, but what Malick creates in The New World is a far deeper, meditative, and reflective experience of the nature of man, violence, love, regret, death, and nature itself. How Malick captures a thousand small moments – waves of tall grass in a gentle breeze, the stillness of lakes at dusk, the fleeting glances of Colin Farrell’s John Smith at the indescribable loveliness and grace of Q’orianka Kilcher’s Pocahontas, are stunning in their beauty and assemble into a masterful and captivating cinematic tone.

Malick is known for his fleeting nods to traditional cinematic narrative norms, preferring to lose himself – and allow audiences to become lost – in the simplicity of moments through ambitious, flowing and moving experiences. Here he crafts a sublime visual poem, buoyed with a reverence to nature and layered with a mixture of James Horner’s original (and underused) score, and classical pieces that infuse the experience with a quiet and unassuming grandeur. The New World could be dismissed as indulgent or pretentious (much the way Malick’s The Tree of Life was derided by a contingent of reviewers who failed to see it’s majesty), but it works so completely and fascinatingly astute in its observations of nature and humanity, and as a work of visual marvel (supported by the inalienable gifts for cinematographer Emmanuel Lubezki), that it could be argued to be Malick’s most profound accomplishment. No small feat.

Malick’s approach to filmmaking and capturing performances is known to be unusual. He will film an excessive amount of footage, allowing performers to become lost in their roles so that he may find those moments of utter honesty in actor’s delivery to help craft the mood fitting of his picture. This allows his films to be alive with extraordinary performances and here, Colin Farrell, Q’orianka Kilcher, and Christian Bale as the principles are no exception. Each captures the essence of their respective roles. There is no melodrama (hard to have that with such little by way of standard narrative drive), only concentrations of who these characters are within the tonally rich cinematic experience Malick has built. All the more appreciated in the 172-minuted extended (and my preferred) cut of the film.

Criterion’s presentation of Malick’s The New World is stunning. It features a “new digital transfer created in 4K resolution at 16-bit color depth on a Northlight 2 film scanner from the 35mm original camera negative, a 35mm interpositive, and the 65mm original camera negative for select shots.” As the booklet also notes, “the 35mm negative had been cut in 2005 to create the theatrical version, so it could not be used for the entirety of the extended version.”

What results is a thing of beauty and a faithful representation of Malick’s eye for natural beauty, captured almost exclusively using natural light, with lush greens, breathless blue skies, superb shadow and contrasts, incredible detail (most notably in faces and costumes), and an absorbing exquisiteness in the untouched natural landscapes.

The New World’s English DTS-HD Master Audio 5.1 is exquisite. The sounds of nature – the wind, insects, water, rain, and more are so prevalent that they become an integral element to the experience. Mixed with the reflective, poetic, “diary” voice overs and a blend of Horner’s nature-inspired score and selected classical tracks create a fascinating auditory experience.  The level of clarity in the audio design is superb. A flawless audio.

The longer, 172 minute cut seems to feature the most of James Horner’s score. James Horner was displeased that the considerable amount of composition crafted for Malick went unused in favor of classical pieces. Malick was reportedly thrilled with Horner’s contributions, but was unsure of how to incorporate that wonderful composition into the film as he saw it. As a lifelong lover of film scores, and considering that James Horner has always been my most beloved film score composer, it comes as a surprise to say that Malick’s use of classical pieces over Horner’s compositions seems to serve the picture better. Though as a standalone listen (on CD), Horner’s score of The New World is gorgeous and mesmerizing.

Criterion’s release of The New World is comprehensive. With the theatrical, first-cut, and extended editions of the film, Criterion offers the opportunity to understand the building of a Malick film and how each edition can shift and alter the tone of the film in subtle and interesting ways. With new interviews and a new making-of created for this release – along with previously available special features, Malick’s The New World can now be fully appreciated and examined (helped by the superb accompanying booklet and featured essay by film scholar Tom Gunning).

Quite simply, The New World is a luscious, beautiful and unique work. How Malick captures the unspoiled lands of pre-settler Virginia, and the through line of nature’s unrelenting power and significance among the fictionalized (but factually supported) retelling of Pocahontas is wonderful. As a filmmaker, Terrence Malick often works in glances, and in The New World he glancing shots, assembling them to create a mosaic that manages to tell its story and comment on nature and man’s foibles, and builds a world of stunning beauty.

Perhaps Malick, in celebrating nature, is ultimately commenting that nothing can exist in isolation – not nature from man, not indigenous peoples from explorers and settlers, and not the heart from hurt. Regardless, how Malick has told this story is something to be celebrated and The New World should be celebrated for the marvelous accomplishment that it is. 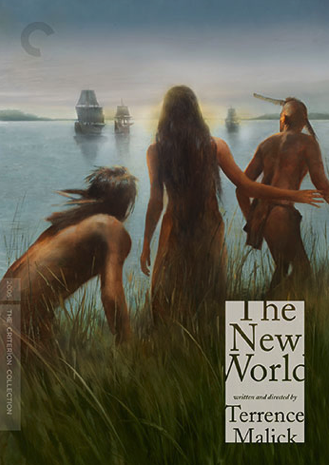