Posted on August 20, 2016 by Matt Hough
A strong season for the CBS procedural with major changes for next year afoot. 4 Stars

The thirteenth season was a tumultuous one for CBS’ hit procedural NCIS. In addition to the announcement early in this year’s run that one of its original cast members would be leaving at the end of the season, the show’s writers gave almost every series regular bombshells for their characters to deal with which provided almost continual angst to surround the already puzzling mysteries which the team found itself solving each week.

The thirteenth season was a tumultuous one for CBS’ hit procedural NCIS. In addition to the announcement early in this year’s run that one of its original cast members would be leaving at the end of the season, the show’s writers gave almost every series regular bombshells for their characters to deal with which provided almost continual angst to surround the already puzzling mysteries which the team found itself solving each week. And with occasional recurring characters either meeting their ends or facing serious injuries during this season’s twenty-four episodes, it’s safe to say that the show’s producers decided to pave the way for next season’s unquestionably different face by beginning to shake things up this season from the program’s status quo.

Having barely survived an attack by a child gunman at the end of season twelve, NCIS Special Agent Leroy Gibbs (Mark Harmon) battles for his life on the operating table assisted by Dr. Cyril Taft (Jon Cryer) in the first of several guest appearances throughout the season. The season’s first two episodes resolve the cliffhangers from the previous season while Gibbs slowly undergoes recovery from his injuries with occasional setbacks, psychological damage that requires his first-ever consultations with a psychiatrist, Dr. Grace Confalone (Laura San Giacomo). It’s a difficult season for probationary agent Ellie Bishop (Emily Wickersham) as her seemingly rock solid marriage to an NSA lawyer (Jamie Bamber) hits the rocks and by season’s end is headed for divorce court. Forensic scientist Abby Sciuto (Pauley Perrette) has two upsetting encounters this season: hunted by terrorists on a rare field trip to a pharmacological corporation and later in a two-part crossover episode with sister series NCIS: New Orleans attempting to save her brother (Tyler Ritter) from a Russian con woman who has put a target on his back. Medical examiner “Ducky” Mallard (David McCallum) likewise has a pair of life-altering experiences: his off-hours amateur detective society The Sherlockians becomes involved in a murder hunt and later in the season comes to learn his half-brother, whom he had long thought dead, turns out to be alive but almost impossible to trace. Computer expert Timothy McGee (Sean Murray) moves in with his longtime girl friend and plans to pop the question at season’s end, one of the few characters whose personal situation doesn’t turn out to be life threatening even if it is life altering.

But the season’s primary focus is in giving a deserved sendoff for Very Special Agent Tony DiNozzo (Michael Weatherly) who has been with the show all the way back to the backdoor pilot that had aired on a two-part J.A.G. episode. During the course of the season, Tony twice is cast headlong into dramatic situations with Jeanne Benoit (Scottie Thompson), a long ago love from an undercover mission whose heart he broke and who now is a married doctor doing charity work in the Sudan. Both episodes involving Tony and Jeanne place emotional strains on their composure around not only themselves but their loved ones even though both cases are among the best of the season. In more lighter-hearted outings, Tony contracts a virulent outbreak of poison oak in one episode and has his identity stolen by three different people in another, both offering actor Weatherly a chance to show off his comic chops. There’s nothing comic about the final story arc of the season, however, which extends over the last four seasonal episodes and involves many members of the NCIS family under attack by an unknown assailant who manages to inflict quite a bit of harm before things get sorted out. There are a number of surprises in store for Tony DiNozzo, too, as revelations in the season finale pave the way for his exit from the show and for a season ending that thankfully does not rely on an irritating manufactured cliffhanger to keep fans on tenterhooks until the start of the next season.

All of the series regulars are so accomplished with their characterizations now that it seems superfluous to mention the professional ease with which they do their jobs. Among the recurring roles and guest cast members, there were several standouts and some who didn’t particularly shine. With Michael Weatherly’s exit pending, the NCIS producers brought in two new agents during those last episodes as a sort of on-air audition for the empty squad chair to be filled. Sarah Clarke as FBI Special Agent Tess Monroe wasn’t especially forceful playing her role, and as of now, she hasn’t been offered a return ticket to the show’s next season, but Duane Henry playing MI6 Officer Clayton Reeves did impressive enough work to claim a recurring spot on next season’s roster (along with a couple of other actors who have already been named to join the team). Alan Dale makes a welcome return appearance as a former head of NCIS, now working for Homeland Security, and as always, Joe Spano as Gibbs’ best friend FBI Agent Tobias Fornell also stops by with regular frequency. A couple of episodes revolve around the Secretary of the Navy played only adequately by Leslie Hope while Alan Campbell playing the young Donald Mallard in flashback episodes is wonderful in the episode concerning Ducky’s long-lost brother.

The following are the twenty-four episodes contained on six discs in this season thirteen set. The names in parentheses refer to the participants in the audio commentary available for that episode:

The program is presented at 1080i on the network broadcasts, and these downconverted 1.78:1 transfers are anamorphically enhanced for widescreen televisions. The show switched to digital production a few seasons ago, but the image has maintained its slightly soft-focused (especially in the commons room), slightly diffused color, and slightly milky contrast look even when going from film to digital. The picture quality is perfectly pleasing and similar to the network broadcasts, but it’s never going to have the crystal clarity or eye-popping color values of other primetime series. Flesh tones are natural, and black levels are all decently rendered. Each episode has been divided into 7 chapters.

Audio Commentaries: three of the four are more filled with free-flowing compliments rather than providing viewers much behind-the-scenes information on the episode’s production, but both parts of “Sister City” which features only the shows’ writers offers the best behind-the-scenes information on the tough logistics of staging these crossover episodes in two different cities and with two different casts and crews.

Deleted Scenes: only two scenes have been included this season, both occurring on disc five.

“Sister City” (Part II): the second half of the crossover episode that aired on NCIS: New Orleans is included on disc three. Audio commentary by the writers is also available on this episode.

Boom (5:31): special effects supervisor Larry Fuentes, producer Mark Horowitz, director Bethany Rooney, and director of photography William Webb discuss how terrific explosions are rigged to save time and money and yet provide safety for the cast and crew.

Celebrating 300 (8:53): a behind-the-scenes look at the party thrown for cast and crew on the completion of the series’ 300th episode “Scope.”

Heroes’ Song (8:52): Gary Glasberg and Mark Harmon discuss the founding of MusicCorps, a group of injured servicemen who have used music as an aspect of their reparative therapy which is featured in the episode “Scope.”

Inside Season 13 (24:14): an overview of the season with cast and crew mentioning particular episodes which had significant impact on their characters or the program.

The Definitive DiNozzo (14:15): Michael Weatherly looks back over thirteen seasons and mentions episodes which had an impact on him. Also weighing in on his wide-ranging effect on the show are cast mates Sean Murray, Mark Harmon, David McCallum, Pauley Perrette, Brian Dietzen, Rocky Carroll, Emily Wickersham and producers Mark Horowitz and Gary Glasberg.

All’s Fair in Love and War (7:28): the two major couple relationships on the show: one which goes sour and one which seems healthy are examined by Emily Wickersham, Jamie Bamber, and Sean Murray.

The Agency Turns 50: Rocky Carroll interviews one of the actual heads of NCIS, Deputy Director Mark Ridley, on the occasion of the agency’s fiftieth anniversary. Several NCIS agents speak on the show’s accuracy and popularity within the community.

While the thirteenth season was a strong one for NCIS and the show has picked up a two-year renewal from the network, the upcoming season will likely be a pivotal one in seeing whether audience loyalty will suffer at the loss of another beloved character from the show. Meanwhile, for fans of the series, the set though not in high definition (last season got a Blu-ray release) is still recommended. 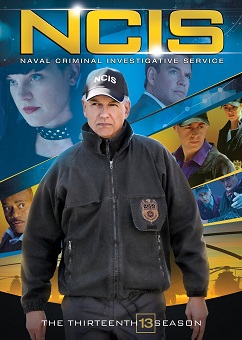