Some deeply emotional episodes in this long-running franchise 4 Stars

NCIS had a solid, emotionally satisfying season sixteen with lots of opportunities for all of its regulars to show their dramatic and comedic chops and with a handful of deeply emotional stories that show the crime procedural in its best light.

If one word could be used to describe the overall mood of CBS’ NCIS during its sixteenth season, it would be “emotional.” More so than in recent seasons, the episodes this year tap into a wellspring of deep-seated emotions for many of the characters in the network’s long-running and top-rated dramatic procedural. It helps that the cast of regulars is stable and secure this season with no additions or deletions to the very familiar roster of actors making the viewers’ identification with these longtime characters paramount.

Once the ridiculous season fifteen cliffhanger is resolved in the season’s first episode “Destiny’s Child,” the characters are off and running on another very good season of cases. The four-person team is led by Leroy Jethro Gibbs (Mark Harmon) with senior field agent Timothy McGee (Sean Murray) now fully grown into his position of leadership for the squad when Gibbs is away. Ellie Bishop (Emily Wickersham) and Nick Torres (Wilmer Valderrama) complete the line-up. The latter two seem to have inherited the will-they-or-won’t-they vibe from previous seasons’ flirty agents DiNozzo and David with the couple’s closeness particularly noticeable through prolonged glances, inside jokes between the two, and occasional squabbling, a sure sign of a potential relationship in the offing in upcoming seasons. Dr. Jimmy Palmer (Brian Dietzen) graduates to chief medical examiner during the season when longtime M.E. Dr. “Ducky” Mallard (David McCallum) segues into a new position as NCIS historian which will allow the elderly actor to recur through the season without having to appear in every episode. Added at the end of season fifteen is Diona Reasonover playing amiably fizzy forensic scientist Kasie Hines who immediately fits into the NCIS family as if she had always been there. Also playing an important role for the team this season is house forensic psychologist Dr. Jacqueline Sloane (Maria Bello) who, particularly in the Christmas episode “What Child Is This?” seems to be headed toward a potential relationship with Gibbs in future seasons.

Each of the primary characters gets at least one showcase episode this season which allows the actors to explore their characters with greater emotional depth and often leaves viewers with tear-filled eyes by episode’s end: Bishop makes a crucial discovery regarding the agent she replaced Ziva David in the episode “She.” McGee goes on an undercover assignment to Silicon Valley to gain valuable information in “Judge, Jury…,” while Torres gets two big episodes: dealing with an unwanted mentoring assignment in “Crossing the Line” and defending himself from a murder charge in “Mona Lisa.” Palmer must deal with his quirky father-in-law in “Bears and Cubs.” Sloane reconnects with her long-ago abandoned daughter in “Perennial,” and Gibbs takes a walk down memory lane with a childhood mentor (Dabney Coleman) who arrives at NCIS looking for assistance from him in “The Last Link.”

The season produces one wide ranging story arc that goes through multiple episodes and puts the entire team, particularly Gibbs, at risk. It involves the discovery of a half-billion dollar slush fund which traces back to the Secretary of Defense (Mitch Pileggi) and involves members of the CIA and includes a woman (Dionne Gipson) whom NCIS director Leon Vance (Rocky Carroll) begins to have feelings for. The resolution of this mystery near season’s end sets up incidents which will be resolved in season seventeen and which produces what amounted to one of the year’s biggest season-ending surprises. The episode preceding that big surprise was particularly lame for a show which usually goes out with a solid end-of-season episode (featuring Gibbs having hallucinations about his annoying ex-wife Diane played by the sometimes off-putting Melinda McGraw), but the big revelation at the end sets up the next season which will likely bring back longtime fans who might have drifted away in recent seasons with the numerous cast changes the show has endured.

Here are the twenty-four episodes contained on six DVDs in this fifteenth season set. The names in parentheses are participants in the audio commentary for that episode.

14 – Once Upon a Tim (writers Steven Binder and David North)

The program is presented at 1080i on the network broadcasts, and these downconverted 1.78:1 transfers are anamorphically enhanced for widescreen televisions. The show switched to digital production a few seasons ago, and the image has finally reached a point where it matches the visual quality of the network’s other top shows. The picture quality here is perfectly pleasing and similar to the network broadcasts, but being standard definition, there are fairly frequent moiré patterns and some aliasing to be seen in many episodes. Flesh tones are natural except in low light situations where colors appear a bit hotter and less appealing, and black levels are all decently rendered. Each episode has been divided into 7 chapters.

The Dolby Digital 5.1 audio track (there is also a Dolby 2.0 stereo surround track available for each episode) does not always take full advantage of the available channels for this action-oriented series. Music by Bruce Kirk in each episode seems to be the most frequent occupant of the rear channels as the score is generously spread through the soundstage, but ambient sound effects don’t often get the full surround treatment though when explosions hit, they hit with real impact waking up the subwoofer. Dialogue, an important aspect of this crime procedural, is always well recorded and has been placed firmly in the center channel.

Audio Commentaries: there are four available this year (see above episode listing) but none of them are essential listening. The best is the one attached to “Bears and Cubs” since Christopher Waild was acting as a substitute for Brian Dietzen and not personally involved in that particular episode. Thus, he could ask questions and make comments to the show’s writer more objectively. The commentary for “Hail & Farewell” goes silent for long stretches as the commentators get absorbed in the story and stop talking.

NCIS had a solid, emotionally satisfying season sixteen with lots of opportunities for all of its regulars to show their dramatic and comedic chops and with a handful of deeply emotional stories that show the crime procedural in its best light. Despite only a standard definition release, the box set is an acceptable substitute for fans of the long-running show. 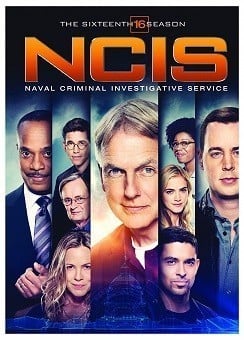