Posted on August 11, 2018 by Matt Hough
A very good season for this venerable show 4 Stars

Even after fifteen seasons on the air, CBS’ NCIS, despite its formulaic procedural structure, managed to evolve its characters and stories, introduce new members to the team, and sadly bid goodbye to some others.

Even after fifteen seasons on the air, CBS’ NCIS, despite its formulaic procedural structure, managed to evolve its characters and stories, introduce new members to the team, and sadly bid goodbye to some others. This latest season of CBS’ number one drama seems to have found a winning mixture of core team players and while one new addition has yet to prove herself, the future looks reasonably endless for this long-running popular show.

With Jennifer Esposito’s Alex Quinn now off the NCIS A-team, the Jethro Gibbs-led (Mark Harmon) team now consists of senior field agent/computer expert Tim McGee (Sean Murray), former NSA analyst Ellie Bishop (Emily Wickersham), and team muscle Nick Torres (Wilmer Valderrama). (In one of the bonus features included in this set, producer Mark Horowitz admitted that five core agents used in the previous season was too many to use effectively and that NCIS would stay with the four-person team). Occasionally assisting the squad on investigations with an international bent is MI-6 agent Clayton Reeves (Duane Henry) on assignment from the London office. After the season premiere episode “House Divided” resolves the season fourteen cliffhanger which left Gibbs and McGee stranded in Paraguay at the mercy of terrorists, the group embark on a lively set of new cases. Among them are investigating a dead marine found in someone else’s casket, the search for an abducted navy lieutenant, Bishop and Torres going undercover investigating criminal activity on the docks, the mysterious hanging of a JAG lawyer, the discovery of poisoned cookies in homemade care packages prepared for sailors abroad (this one features guest star Drew Carey), the uncovering of a Viking war stick used as the weapon in a sixteen-year old cold case, and the discovery of fake military IDs which offer instant access to bases around the world.

But two of the best episodes of the season involve the show’s newest addition, forensic psychologist Dr. Jacqueline Sloane (Maria Bello) who offers an objective presence for the team to bounce ideas off of and to discuss personal and professional problems with a non-judgmental ear. In the first, Sloane along with Torres is assigned as the security detail of a U.S. senator in Afghanistan over the holidays, the group becoming stranded in the desert when their mission goes awry. And in the show’s best episode of the season “Death from Above” (directed by co-star Rocky Carroll playing NCIS head Leon Vance who helmed three episodes this year), NCIS headquarters is invaded by a crew out to destroy evidence in a drug cartel case. On the other hand, the show does go off the rails once this season: in the Thanksgiving episode “Ready or Not” as the plot juxtaposes a standoff between the team and a wounded killer as McGee’s wife Delilah (Margo Harshman) gives excruciatingly long and noisy birth to twins. Developments within the faceoff are unbelievable and annoyingly ludicrous, and the cuts back to Delilah in labor try one’s patience to the max.

Other changes are afoot on the show during the season. Medical examiner Dr. “Ducky” Mallard (David McCallum) agrees to a lecture series at his old university in Edinburgh and then agrees to write a book on his experiences back in New York effectively removing him from almost half of this season’s shows, his role as M.E. taken over most effectively by former assistant Dr. Jimmy Palmer (Brian Dietzen). And the series says goodbye to one of its stalwarts, forensics pathologist Abby Sciuto (Pauley Perrette) when she’s targeted for extermination by someone she helped send to prison. This two-episode story arc also leads to the death of one of the team’s members solidifying Abby’s decision to do something else with her life. Actress Diona Reasonover playing amiably fizzy scientist Kasie Hines becomes the new face in the lab for the season’s last two episodes and has been named a season regular for next year. In the season’s only other story arc, a crafty and manipulative serial killer (Graham Hamilton) forges a plan to gain freedom from prison with NCIS’ help and then plays a gripping cat and mouse game with them through three tense episodes.

Here are the twenty-four episodes contained on six DVDs in this fifteenth season set:

The program is presented at 1080i on the network broadcasts, and these downconverted 1.78:1 transfers are anamorphically enhanced for widescreen televisions. The show switched to digital production a few seasons ago, and the image has finally reached a point where it matches the visual quality of the network’s other top shows. The picture quality is perfectly pleasing and similar to the network broadcasts, but being standard definition, there are slight moiré patterns and some aliasing to be seen occasionally. Flesh tones are natural except in low light situations where colors appear much hotter and less appealing, and black levels are all decently rendered. Each episode has been divided into 7 chapters.

Audio Commentaries: two are provided this year. The better of the two by far is the one for “Death from Above” with co-star/director Rocky Carroll and writer Chris Waild discussing the genesis of the episode and Carroll’s choices in filming various scenes. Series star Mark Harmon, guest star Joe Spano, writer Gina Monreal, and director Mark Horowitz joke and brown-nose their way through “Keep Your Friends Close” offering next to no background information on the making of the episode but keep a running series of insider jokes and praise for one another in an almost complete waste of time.

Make It Rain (4:04): special effects coordinator Larry Fuentes takes us behind the scenes to see how hurricane effects are accomplished in the studio and on location.

A Conversation with Mark Harmon and Joe Spano (5:26): the two actors discuss their long friendship off camera and the evolution of the Gibbs/Fornell friendship during fifteen years on the show.

Hello Jack Sloane (10:12): the addition of Maria Bello to the cast of the show is discussed by the actress herself along with producer Chas Floyd Johnson, Mark Horowitz, Mark Harmon, Wilmer Valderrama, Rocky Carroll, and Emily Wickersham.

David McCallum Answers the Proust Questionnaire (6:36): the title is self-explanatory

NCIS had a very good fifteenth season filled with some stimulating mysteries, some intriguing new characters, and new relationships which should develop interestingly in the seasons to come. This season’s DVD set does not offer a satisfying farewell or pay sufficient homage to Pauley Perrette’s lasting achievements on the show (her parting from the series was less than amicable with some rancorous stories emerging after her final episode aired) and is the most disappointing aspect (other than its not being in high definition) of an otherwise fine release. 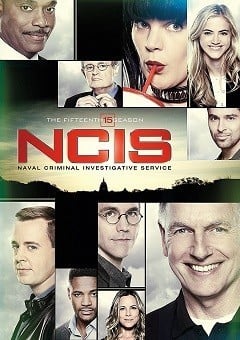