A strong third season for this CBS procedural 3.5 Stars

NCIS: New Orleans now in its third season seems set for upcoming seasons with a stable cast and its own identity within the NCIS universe.

It was a tumultuous third season for most of the members of team NCIS: New Orleans. With a major cast change, two major story arcs that each occupied approximately half of the season, and topsy-turvy developments in the personal and professional lives of its characters, this was perhaps the busiest and most explosive season yet for the show.

With two-season cast member Zoe McLellan leaving the show during the summer, producers decided to replace her with actress Vanessa Ferlito, initially appearing as part of an FBI team investigating malfeasance in the New Orleans branch of NCIS after the uncovering of a mole within their ranks at the end of season two. Ferlito’s Tammy Gregorio and her boss Agent Ray Isler (Derek Webster) clear the team by the end of the second episode but stick around New Orleans investigating a Colombian drug cartel attempting to set up shop in New Orleans as an entry point to the US for their drug operation. As she works with NCIS, Gregorio grows to value the teamwork and camaraderie of Dwayne Pride (Scott Bakula) and his team and is eventually offered a place on the squad to replace the reassigned Meredith Brody. The cartel investigation is the one running story arc for the first part of the season. Its resolution leads into the season’s second long-range arc: the investigation into the suspicious dealings of corrupt New Orleans mayor Douglas Hamilton (Steven Weber), an extensive operation that almost costs Pride his life and the elimination of his entire team from New Orleans.

But most of the team undergoes some serious readjustments during the season. Senior field agent Christopher LaSalle (Lucas Black) is shocked to be presented with a son he didn’t know he had fathered with one-time hookup Melody James (Brianna Brown), a four-episode arc that doesn’t show this trained investigator in the best light (he never even tests the paternity of the child to assure his complicity in his existence). Lab tech Sebastian Lund (Rob Kerkovich) tires of the daily grind of isolated lab work and undergoes special agent training to become a field agent with the team (by far the best story arc of the season as we watch the awkward Sebastian gain in confidence slowly and eventually find his mettle in the field). Medical examiner Loretta Wade (CCH Pounder) must adjust to partially empty nest syndrome when her older adopted child Danny (Christopher Meyer) decides to forgo college and enter the Navy, and she later is almost a victim of a virus outbreak and comes very close to dying. Sonja Percy (Shalita Grant) is thrown into prison for obstructing justice during the investigation into Mayor Hamilton and nearly loses her life. And in addition to his personal vendetta against Mayor Hamilton, Dwayne Pride is also hit with the love bug during the season, embarking on a relationship with assistant district attorney Rita Devereaux (Chelsea Field) though she transfers to Washington before things get too serious.

As with most of CBS’ procedurals, despite back burner story arcs that last over multiple episodes, the episodes mainly offer single, closed-ended mysteries and crime stories. Many of the plots in the early part of the season involve abductions (even Sebastian is abducted in an episode where he’s expected to use his computer wizardry to break someone out of prison) but other episodes involve feuding biker clubs, a race car crew who specializes in robberies, a cyber thief (two separate episodes which bring in guest star Tom Arnold as a legendary computer hacker), a military academy in turmoil, a story about human trafficking, a tale of drug recycling with local police involvement, and a saga about stolen weapons. There is another crossover episode again this season with mothership NCIS: a two-episode tale of a terrorist playbook developed on NCIS and its robbery and recovery carried through in New Orleans. As always, the show’s being filmed in New Orleans gives it an authenticity in sights and sounds that no studio backlot or mere establishing shots can sustain, and the richness of the city is explored in even more depth this season with location work present in every episode and covering many assorted locales in the city and its surrounding areas.

Scott Bakula’s presence and likability factor make him a firm anchor for the show, and his natural leadership is a great boon to the series even if the season’s final episodes find him increasingly reckless, desperate, and rogue. Lucas Black’s combination of easy humor and intense action make him a good fit for the show even if the writers seem to have forgotten that his character was a summa cum laude college graduate and instead allowing him to make numerous errors in speech and sapping his intelligence quotient by dozens of I.Q. points. There is a great tendency this season for everyone on the team to be too concerned about each other’s personal (romantic) lives to the point of distraction, looking hurt and bewildered when one or another is seen with members of the opposite sex (especially true with Percy and LaSalle as the writers inch them ever closer into an unnecessary relationship that will mirror two of the characters on the Los Angeles spinoff). Rob Kerkovich steals season three, however, with his awkwardly endearing lab geek turned field agent Sebastian Lund (we even get to meet his mother in his abduction episode – Wendie Malick who is picture perfect casting as his mom). Vanessa Ferlito begins as a most unlikable character, but the show’s writers patiently work her into the team gradually even if two brassy female agents (Ferlito and Shalita Grant as Sonja Percy) are a bit of overkill for the show. The wonderful CCH Pounder is always a welcome presence in any role, and she’s certainly welcome here as the plain-talking, quick-quipping medical examiner Loretta Wade.

Here are the twenty-four episodes from season three contained on six discs in this package. The names in parentheses are the participants in that episode’s audio commentary:

The program is broadcast on CBS in 1080i resolution, and these down-converted 480p transfers at the widescreen television aspect ratio of 1.78:1 look as good as they possibly can. Unlike the mothership which uses diffusion filters and desaturated color, this show offers clear, crisp images which bring out the wonderful New Orleans locations with outstanding detail. Color values are excellent, too, with rich hues and realistic and appealing skin tones in bright light (though occasionally in lower lit scenes, skin tones can run hot). Black levels are very good indeed especially in some nightly flyover shots. Only the occasional glimpses of moiré patterns and some aliasing in tight line structures spoil otherwise pristine transfers. The episodes have been divided into 7 chapters.

The disc offers both Dolby Digital 2.0 stereo surround and 5.1 surround mixes, and both present effective and enveloping audio design (most of my listening was with the 5.1 tracks). Dialogue is crucial to the show, and here it’s been recorded effectively and has been placed in the center channel. Music by Brian Kirk along with various jazz, Dixieland, and marching bands fill the fronts and rears with arresting, scene-setting music (there is more street music used this season than ever before, and even Sheryl Crow winds up singing in an episode). Ambient split sound effects are also nicely placed when appropriate and pan effectively through the soundstage, while gunfire and explosions (more this season than ever before) have a tremendous kick to them.

Audio Commentary: writer Brad Kern does a wonderful job providing commentary for the season premiere explaining the challenges they faced with replacing a series regular with a new cast member. Writers Christopher Waild and Christopher Silber in the two “Pandora’s Box” crossover episodes offer excellent behind-the-scenes information on the tough logistics of staging these crossover episodes in two different cities and with two different casts and crews. Each man also questions the other as to his writing procedures and techniques.

“Pandora’s Box, Part I” (40:56):  part one of the crossover event as it aired on NCIS. There is optional commentary for the episode provided by its writer Christopher Waild and his counterpart on the New Orleans show Christopher Silber.

The New Girl in Town (8:21): producer Brad Kern discusses the necessity for a replacement cast member and the appropriateness of Vanessa Ferlito for the assignment. The actress likewise adds her comments on this character and how welcome she felt joining the family. Other comments on the actress are provided by Scott Bakula, Rob Kerkovich, Lucas Black, Shalita Grant, CCH Pounder, and Daryl Mitchell.

Propping It Up (4:22): props master Brook Yeaton gives us an extensive tour of the props department for the show.

NCIS: New Orleans now seems set for upcoming seasons with a stable cast and its own identity within the NCIS universe. The third season is action-packed to be sure (but beginning to resemble a bit too closely for comfort the constant on-street warfare that characterizes NCIS: Los Angeles) but is also filled with interesting character development for its increasing cast of characters. For a standard definition release, the show on DVD looks and sounds as good as it can. 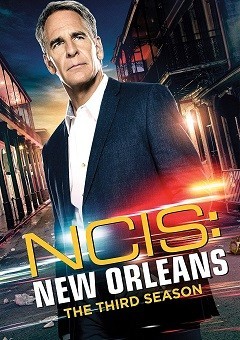