Enjoyable mystery series with the tasty, authentic flavors of its setting 3.5 Stars

There was no sophomore slump for NCIS: New Orleans as the program continued to offer in its second season tasty views of one of America’s favorite cities along with some intriguing crime solving and more than acceptable mysteries.

The most authentic of the highly lucrative NCIS franchise, NCIS: New Orleans grew even more confident in its second season on the air, balancing its crime-of-the-week narratives with dedicated story arcs for many of its principal characters. With two recurring characters from season one upped to regular status and the rest of the cast returning, the show looked and felt bigger than season one. In some ways, the increase in size allowed the show to blossom though some of the intimacy from season one that made it the most unique of the three franchise entries was lost this season.

As in season one, the show’s being filmed in New Orleans gives it an authenticity in sights and sounds that no studio backlot or mere establishing shots can sustain, and the richness of the city is explored in even more depth this season. Also explored in more depth are the personal lives of some of the principal characters working out of the NCIS field office in New Orleans. Headed by Dwayne Pride (Scott Bakula) whose divorce is now finalized, the agency warehouse office is now his place of work and his domestic headquarters as well. Several episodes this season involve his daughter Laurel (Shanley Caswell), now in college but struggling with finding her life’s purpose. Second-in-command Christopher LaSalle (Lucas Black) is slowly recovering from the murder of his lover which happened in season one. Agent Meredith Brody (Zoe McLellan) is on a mission to solve her sister’s murder with several episodes touching on the off-the-books investigation before its solution finally becomes the focus of a single episode “If It Bleeds, It Leads.” ATF-turned-NCIS Agent Sonja Percy spends several episodes away from the office doing undercover work (actually filming Mercy Street in England) which finally comes to a head in the episode “Second Chances.” And medical examiner Dr. Loretta Wade spends several episodes this season embroiled in straightening out the missteps of one of the foster children she is taking under her wing, troubled teen Danny Malloy (Christopher Meyer). As for forensics specialist Sebastian Lund (Rob Kerkovich) and computer hacker Patton Plame (Daryl Mitchell), they provide most of the lighter moments during the show’s second season.

As was the case with season one, the cases almost all follow the patented NCIS formula: someone connected with naval services is drawn into a crime and the team must investigate. The searches allow the team to cover wide expanses of New Orleans beautifully whether it be the French Quarter, the cemeteries, the bayou, the riverbanks, the Garden District, or the surrounding parishes. Whether searching for a stolen guided missile, investigating the mysterious crash of a fighter jet, looking into the death of a Navy drone pilot, hurriedly examining a potential germ warfare outbreak, studying the robbing of treasure in burial crypts, or searching for the source of the poisoning of a Navy lieutenant and an Army general, the team works together as a well-oiled machine in eventually getting to the truth. There are fewer chases, explosions, and street warfare than in NCIS: Los Angeles (though there certainly are some of both on display), and occasionally episodes will stand out from the norm. There’s a beautiful episode where the team races against time to find a stolen heart for a transplant on a certified computer genius, and the Christmas episode finds Pride and recurring character Douglas Hamilton (Steven Weber), once a shady city councilman and now New Orleans mayor, kidnapped by a former acquaintance of one of them who’s convinced they have information to spill about the death of his wife. There is also a freedom fighting domestic terrorist group The Militia who wreak havoc through several episodes of the season and even put a hefty bounty on Pride’s head for his murder. Though there were no official visits from the other NCIS series personnel as there were in season one, there was a crossover episode with NCIS “Sister City” which began on the mothership and concluded in the next hour in New Orleans with actors from one show appearing on the other.

Scott Bakula’s presence and likability factor make him a firm anchor for the show, and he’s taken quiet command of the program just as he had on his previous successful series Quantum Leap and Enterprise. Lucas Black’s combination of easy humor and intense action make him a good fit for the show even if the writers seem to be pushing him and brusque co-star Shalita Grant’s Sonya Percy into the kind of office flirtation that Tony and Ziva made a long-running audience hook on the original series only here it’s more strained. Zoe McLellan seems to have been pushed a bit aside during the season in favor of Shalita Grant’s character, so it was no big surprise that the actress announced she won’t be returning for season three (though both of her running arcs this season with the investigation into her sister’s murder and her involvement late in the season with DHS Agent John Russo (Ivan Sergei) showed her in top form). The wonderful CCH Pounder is always a welcome presence in any role, and she’s certainly welcome here as the plain-talking, quick-quipping medical examiner struggling with parenting for the first time in several episodes. Rob Kerkovich gets the geek/eccentric comic role and is as fine a male substitute for the mothership’s Abby Sciuto as anyone could be. The writers have tried to establish a rather tiresome rivalry between Rob’s Sebastian and Daryl Mitchell’s wise-acre Patton as they strive for tech supremacy, but Mitchell’s persona is mostly off-putting braggadocio while Kerkovich’s nerdy motormouth earns far more laughs.

Here are the twenty-four episodes contained on six DVDs in the second season set:

6 – Insane in the Membrane

24 – Sleeping with the Enemy

The program is broadcast on CBS in 1080i resolution, and these down-converted 480p transfers at the widescreen television aspect ratio of 1.78:1 look as good as they possibly can. Unlike the mothership which uses diffusion filters and desaturated color, this show offers clear, crisp images which bring out the wonderful New Orleans locations with outstanding detail. Color values are excellent, too, with rich hues and realistic and appealing skin tones. Black levels are very good indeed especially in some nightly flyover shots. Only the occasional glimpses of moiré patterns and some aliasing in tight line structures spoil otherwise pristine transfers. The episodes have been divided into 7 chapters.

The disc offers both Dolby Digital 2.0 stereo surround and 5.1 surround mixes, and both present effective and enveloping audio design. Dialogue is crucial to the show, and here it’s been recorded effectively and has been placed in the center channel. Music by Brian Kirk along with various jazz, Dixieland, and marching bands fill the fronts and rears with arresting, scene-setting music. Ambient split sound effects are also nicely placed when appropriate, and explosions have a tremendous kick to them.

Deleted Scenes: three scenes are offered paired with the episodes from which they were excised.

Who Wore It Best? (4:45): the episode “Insane in the Membrane” features a sequence where the team takes part in the Red Dress charity ball, and each of the cast members describes his or her experiences trying on their dresses and voting on who they felt pulled off the look the best.

Dressed to Thrill (8:35): costume designer Ann Walters describes not only the Red Dress episode but also all of her crew’s work behind-the scenes providing wardrobe for the series. Producers Joe Zolfo and James Hayman also comment on the excellent work of the costume department.

“Sister City (Part I)” (40:56): the NCIS episode which formed the first half of the crossover event. This episode also contains commentary with writers Christopher Waild and Christopher Siber.

Bullets and Beignets: Exploring Season Two (21:07): producers Gary Glasberg, James Hayman, Brad Kera, and Joe Zolfo express their satisfaction with the progression the show has made in its sophomore year with new cast regulars smoothly fitting in and more emphasis on the personal side of the lives of the agents. All of the cast principals also comment on their characters’ journeys during the year.

Percy and Plame (12:14): producers James Hayman and Gary Glasberg along with star Scott Bakula express admiration and appreciation with new cast regulars Shalita Grant and Daryl Mitchell.  Grant and Mitchell each share some background on how they came to be a part of the cast.

New You See It (7:18): location manager Evan Eastham discusses his work in scouting new locales for episodes to give viewers a thorough taste of all of New Orleans. Producer James Hayman also comments on the success of the show in representing the real life Louisiana environs.

All the World’s a Stage (3:52): each of the principals comments on what led him or her into acting as a profession.

There was no sophomore slump for NCIS: New Orleans as the program continued to offer tasty views of one of America’s favorite cities along with some intriguing crime solving and more than acceptable mysteries. While not in high definition, these standard definition transfers up-convert about as well as any standard definition material does with a top-flight Blu-ray player. 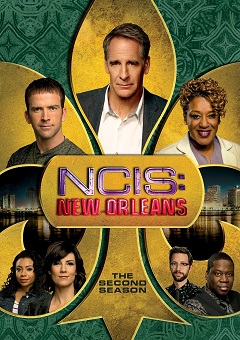