Forum List What's new Dark Style Change width
Log in Register
What's new Search
Menu
Log in
Register
Navigation
Install the app
More options
Dark Style
Close Menu
Posted on April 29, 2016 by Todd Erwin
You are using an out of date browser. It may not display this or other websites correctly.
You should upgrade or use an alternative browser.
A mixed bag of episodes 3 Stars

Mystery Science Theater 3000: Volume XXXV offers up four more episodes new to DVD, but are not exactly representative of the series at its best.

This 35th volume features four episodes that are not necessarily the best of the series. Disc one starts out with Experiment #315, featuring the Roger Corman-directed Teenage Caveman starring a very young Robert Vaughn as a rebellious cave dweller who wants to discover what lies beyond the land inhabited by his tribe. The movie is rather dull, and the riffs from Joel, Tom Servo, and Crow help somewhat, but I never found myself laughing much, including the host segments which most fall flat. The highlights of the episode, though, are the two shorts that precede the feature: Aquatic Wizards, about a team of water skiers in Cypress Gardens, Florida, and Catching Trouble, a very disturbing short about trapper Ross Allen catching animals to fill an order for several animal parks (PETA would have a field day).

Disc Two offers up Experiment #405, Being From Another Planet, a re-titled/re-packaged version of Time Walker, courtesy of Film Ventures, complete with a nonsensical tagged on opening title sequence the company was famous for (see Pod People or Cave Dwellers). This is a fairly cheesy low-budget independent sci-fi/horror film about a mummified alien found inside King Tut’s tomb and awakened by an overabundance of X-rays by one of Ben Murphy’s lab assistants. The mummy then goes on a killing spree trying to reclaim the missing crystals from his sarcophagus so he can travel home. The movie is a disaster (you can watch the original version as one of the bonus features), and Joel and the ‘bots get in some good riffs. The host segments are about on par with the rest of Season Four, with Joel and the ‘bots playing Movie Slogan 20 Questions, the Mads showing off their Tragic Moments figurines while Joel and the ‘bots demonstrate their Jack Palance impersonation kit, Joel discusses the career of Bill Mumy, Crow and Tom play haunted house, and TV’s Frank Shopping Network tries to get Frank to release the Satellite of Love.

Disc Three brings us Experiment #524, 12 to the Moon, a 1960 science fiction film from Columbia Pictures about an international space crew’s mission to the moon where they encounter an alien presence that deems man unfit to travel in space and must be destroyed. The feature is preceded (and overwhelmed) by the short Design for Dreaming, a commercial for General Motors masquerading as a futuristic tale of technological advances. The short gets the better riffs from Mike and the ‘bots (“It’s a salute to Mr. B. Natural!”) than the feature does, and the host segments make several callbacks to the short.

Finally, Disc Four features Experiment #703, Deathstalker and the Warriors From Hell, a Roger Corman produced medieval fantasy shot in Mexico which was the third (and not final) installment of the Deathstalker series pitting the title character (played by John Allen Nelson) against the evil Troxartas (Thom Christopher) as he tries to unite three enchanted jewels to unlock the key to the lost city of Erendor. It’s your typical 1980s low-budget Conan wannabe, with laughable stunts and even worse acting. Mike and the ‘bots get in some good riffs (“Aw, this is a sequel to something!”), but the host segments suffer due to the unfunny running gag of Mrs. F being ill and constantly pleading for Dr. F’s attention. This episode was from the ill-fated (and very short) seventh season, the show’s last on Comedy Central.

The only fair thing to do is to judge the host segments, and the quality improves as you get later into the series. Disc one has some minor softness to it, but colors are consistent. The remaining discs are excellent, with increased detail and well-defined colors. Throughout all four discs, however, there are some brief minor anomalies inherent in the broadcast masters, such as dropouts, but these are few and far between.

As with Shout! Factory’s other MST3K boxed sets, the menu designs on each disc are themed with the episode, with new puppet animation, and are very funny. Also included in the set are a set of original comic book style mini-posters for each episode, identical to the DVD covers, created by Steve Vance. All four discs come housed in THIN-Pak keepcases inside a paperboard sleeve.

Disc Two (Being From Another Planet):
Time Walker (85:41): The original, unedited, unaltered version of the movie featured in this episode.

Richard Band Remembers (5:12): The composer for Time Walker, aka Being From Another Planet, discusses how he was hired for the film and what it was like as a composer for low-budget movies in the 1980s.

Disc Three (12 To the Moon):
You Are There: Launching “12 To the Moon” (9:18): Another terrific documentary from Ballyhoo Motion Pictures on the making of 12 To the Moon, as told by film historian Jeff Burr.

Disc Four (Deathstalker and the Warriors From Hell):
Medieval Boogaloo: The Legend of Deathstalker III (11:54): Thom Christopher discusses his career leading up to and including Deatrhstalker III.

Mystery Science Theater 3000: Volume XXXV offers up a mixed bag of episodes with some interesting bonus features that fans will likely enjoy.

It's taken more than 15 years but they're getting to the point where there isn't that many episodes left to release.

yeah, it's wonderful having these. Of course, I'll be replacing some old ones with the newer re-releases. And hoping they start on that there local season with a long hair Joel. Some of those are gems. Weinstein's Tom is particularly good in those.

(not so sure about the reboot. I'm tempted to pre-order the set for $100, but something is stopping me... much see more I guess, the teasers they did made it sound like someone's homemade try at mystery science theatering)

Radioman970 said:
(not so sure about the reboot. I'm tempted to pre-order the set for $100, but something is stopping me... much see more I guess, the teasers they did made it sound like someone's homemade try at mystery science theatering)
Click to expand...

I'm just trying to think of with the idea that the show isn't going to be the same as what I love. As long as I remember that I can never go home again, I'll hopefully enjoy what they actually do rather than focusing on what isn't the same or as good as before.

well you know, as kind of an afterthought watch it might be fun. But stacking it up next to my mst3k sets for watch after I'm finished with season 10 (on Season 4 now) it has a lot to prove! One thing I noticed is that all the players sound similar, the guy and the bots. That's something that was never a problem with any of the old shows starting with those local ones and ending with the last in Season 10. Voice variety, I think they miscast. The crow is good though... I like his voice. The other two... I'll have to see a finished one then write my check to Joel. Oh, I haven't seen Patton Oswalt in character yet but I think I'll like him as the new TV's Franks. I hope he can do it though, you know his wife died recently. Just a horrible thing for him and his daughter.
You must log in or register to reply here. 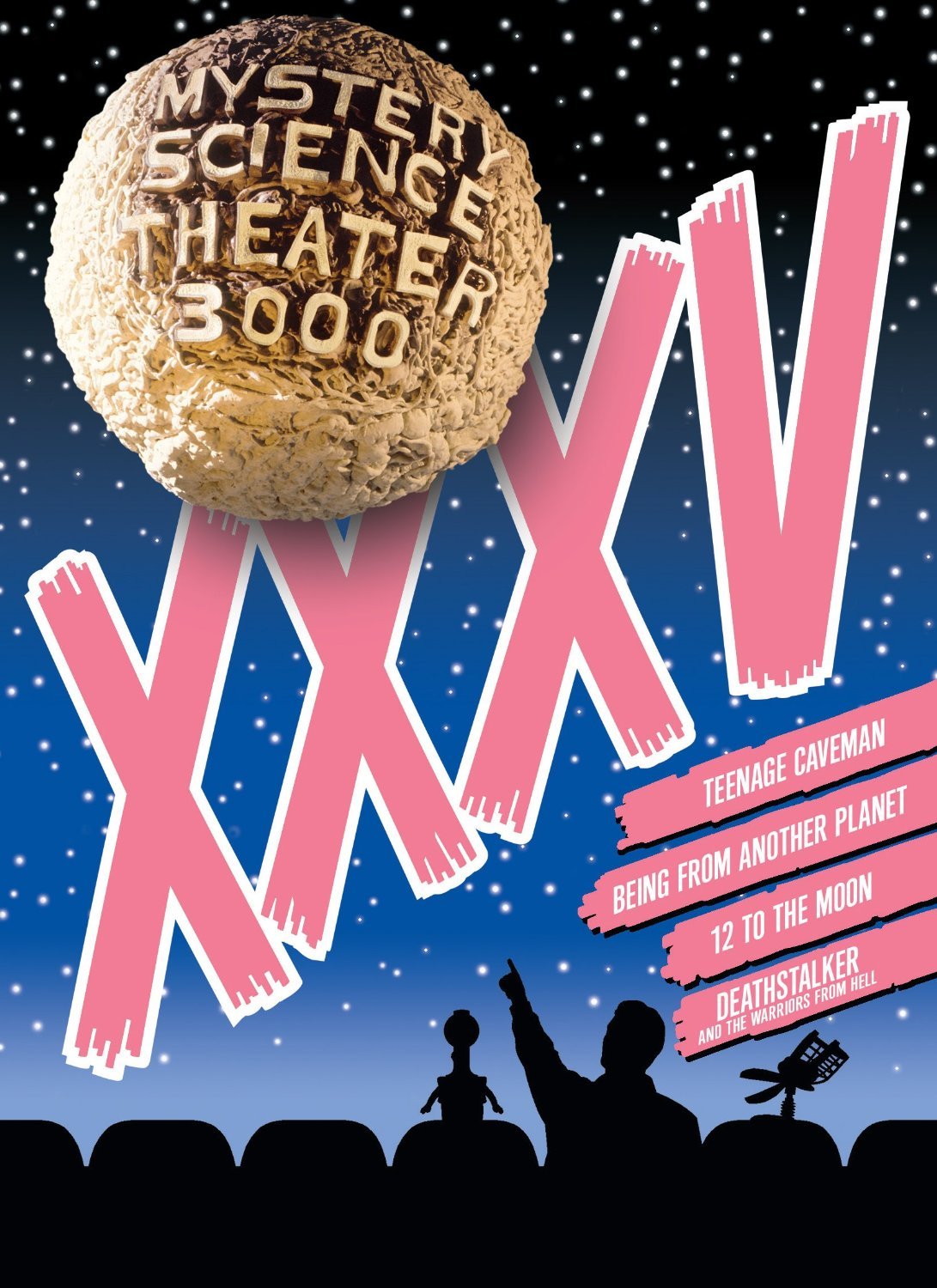