Kino has released the third and last of producer’s Victor Saville’s 1950s Mike Hammer films, My Gun is Quick.  Released in 1957 My Gun is Quick was also co-directed by Saville under the pseudonym Phil Victor and first and only-time director George White.  Almost anything looks inferior compared to Saville’s second Mike Hammer film, 1955’s apocalyptic Kiss Me, Deadly directed by Robert Aldrich.  In spite of good photography and production design and a fair amount of action, My Gun is Quick disappoints and is mediocre at best.

My Gun is Quick (supply your own jokes) starts with a disheveled and exhausted Mike Hammer (Robert Bray) walking through what appears to be Los Angeles’ skid row.  It looks like he is traversing through a neon netherworld.  Hammer stops at a diner to call his secretary, Velda.  He explains to her on the phone, “Just crawled out of a sewer; not a decent person left in the world.’  What was his last case?!  I think I might want to see that more than the upcoming case.  He then orders Velda a chopped egg sandwich which is very thoughtful of Hammer seeing as he just crawled out of a sewer.

The only other people in the diner are counterman Shorty (Phil Arnold) and ‘Red’ (Jan Chaney), a young prostitute.  Hammer buys ‘Red’ a bowl of soup but her meal is interrupted by her oily pimp Louis (Richard Garland).  Hammer, in the usual fashion, throttles Louis and throws him out of the diner.

Hammer then gives the frightened ‘Red’ money for new clothes and a bus ticket back home to Nebraska.  While the two talk Hammer notices a distinct ring on ‘Red’s’ finger.  Before parting, Hammer writes down his name and address on a piece of paper and instructs ‘Red’ to write him saying she made it home safely.

A few hours later Hammer is told by his police captain friend Pat Chambers (Booth Colman) that a young woman has turned up dead and had his name and address in her pocket.  This is the set up as Hammer soon discovers that the ring the young woman was wearing in the diner was not on her in the morgue.

The movie starts well, and the opening scene is effective, in fact, it’s the best scene in the movie.  The dialogue is juicy in this scene, here are some examples:

“Drop that knife or I’ll blow the top of your greasy head off.”

During the first scene, I was beginning to think My Gun is Quick was going be a genre spoof with self-consciously exaggerated hard-boiled dialogue, like the Girl Hunt Ballet from The Band Wagon.  But my hopes were dashed as that kind of dialogue either disappeared or it dawned on me that the movie wasn’t a satire.

The credits proclaim, ‘Introducing Robert Bray as Mike Hammer’.  Bray had been in movies for ten years at this point.  Bray is miscast.  He projects a kind of square sincerity, perfect for well-meaning authority figures, not so good for Mike Hammer.  It’s not sadistically funny when he menaces Shorty, it’s pathetic watching a hulking man beat a cowering little man.

The rest of the cast is adequate but not much more, but I confess that I found Jan Chaney who played ‘Red’ to be charming.  She disappeared from the movie and it appears Hollywood too quickly.

The script by Richard Collins and Richard Powell is weak and may reflect the source.  The convoluted plot involves a WWll colonel recently released from prison, a not-on-the-level rich widow, and smugglers all chasing jewels stolen from Nazis.  This sounds exciting but in fact comes off more like a poor man’s The Maltese Falcon minus the wit, eccentric characters, and insight into human nature.  All the motivations are hackneyed genre conventions.  The film’s biggest flaw is the lack of a strong, well-defined villain, though one of the villains has a hook – that’s always a plus.

There were some talented people behind the camera.  This was producer/co-director Victor Saville’s third go-around with Hammer.  I, the Jury used to play on local television a lot when I was young.  I always missed it and have actively avoided it in the last decade hoping a 3D version will someday become available.  I’d be excited to see what cinematographer John Alton does with the 3D.  And I, the Jury does have Joe Besser in it; it can’t be all bad.

Robert Aldrich’s Kiss Me, Deadly is something from another planet.  Aldrich and screenwriter A. I. Bezzerides turn Hammer and the genre upside down.  Hammer, who is not glorified is played to sullen and narcissistic perfection by Ralph Meeker.  He is a stupid and crude man in way over his head who unknowingly unleashes the end of the world.  It’s one of the great films of the 1950s but I can’t imagine it satisfied Spillane fans at the time.

Saville seems to be a strange producer for Mike Hammer movies as nothing in his career points in this direction.  As a producer Saville was responsible for quality MGM productions such as The Citadel, Goodbye, Mr. Chips, The Mortal Storm, and Bitter Sweet (from Jeanette and Nelson to Mike Hammer!) He directed Evergreen, Green Dolphin Street, Tonight and Every Night, Kim, and the notorious (at least to Paul Newman) The Silver Chalice. Perhaps Saville thought he was going to hit pay dirt like past producers of Charlie Chan, Tarzan, or Sherlock Holmes movies and envisioned a successful series?

Co-director George White was an MGM editor responsible for such films as Bataan, The Clock, Yolanda and the Thief, The Postman Always Rings Twice, and The Naked Spur.  He moved from MGM to Monogram.  From editing Fred Astaire movies to Leo Gorcey movies; that’s quite a leap.  This was his only directing credit.

Cinematographer Harry Neumann also was at Monogram where he specialized in westerns but did shoot two notable 3D titles, The Maze and Dragonfly Squadron.  There are some striking shots in My Gun is Quick, but dialogue scenes tend to be uninteresting two shots with little coverage.  I’m sure this was dictated by the shooting schedule.  There is a lot of 1950s Los Angeles location work here; that’s always interesting.

Perhaps the strongest element of the film is Boris Leven’s art direction.  He does wonders with little budget.  From night clubs to squalid apartments to strip club dressing rooms to sleek mid-century home décor the art direction is more versatile than any of the performers in the film.  Leven did a lot of great work over his career for directors such as Josef Von Sternberg, Julien Duvivier, Robert Siodmak, William Cameron Menzies, Robert Wise, Richard Fleischer, and Martin Scorsese.

The character Mike Hammer is a working-class, American James Bond.  That is, both are post-war male fantasy figures created for men of the era.  James Bond literally has a license to kill from his government.  Mike Hammer kills at the drop of a fedora.  Both characters profess some sort of moral code, but when you analyze their actions both are glorified vigilantes that also happen to be chick magnets.  Go figure!  Bond kills to save the world from power-mad super-villains bent on world domination while Hammer kills to save the world from two-bit punks.

Both are enduring characters created by average (some might argue not even) writers who had the good fortune to win the pulp fiction lottery.  You could in that sense compare them to Sherlock Holmes or Tarzan, but Doyle and Burroughs are much better writers than Fleming or Spillane.

Both characters have been played by numerous actors and depending upon the era of the movie and because the characters are basically ciphers, each is malleable enough to reflect the male values of that particular era.  The major difference in the movie incarnations is that Bond has had better fortune because of the steady hand of Albert Broccoli (Bond is certainly at this point more Eon than Fleming) and his heirs than has Hammer who roams from producer to producer, bouncing back and forth from the movie screen to the television screen.  In any event, these characters never go away.

Kino has released My Gun is Quick in what they are advertising a brand new 2K master.  It does indeed look very nice.  Very nice contrast highlighting night scenes with few blemishes or scratches.  The transfer has good detail.  I have to think that this blu ray looks better than theatrical prints from 1957.

There are no special features other than trailers.

My Gun is Quick is an okay time filler.  I don’t understand the attraction of a character like Mike Hammer when played straight.  But I’m obviously in the minority here.  Kino has provided a wonderful transfer of an otherwise obscure but mediocre movie.   I’d only recommend this if you are die-hard Mike Hammer fan.

Thanks for the review. I've never seen this film and I'd like to but it doesn't sound like a film I'd watch again and again. I've always been impressed by Robert Bray and I agree with your point about him having the screen presence and persona to be an authority figure. John Sturges, who was always careful about casting for his supporting characters, used Robert Bray in that capacity in Never So Few. He has a very small role in Blood On The Moon which is about to appear on Blu-ray disc.
Reactions: Darby67 and lark144

Robin9 said:
Thanks for the review. I've never seen this film and I'd like to but it doesn't sound like a film I'd watch again and again. I've always been impressed by Robert Bray and I agree with your point about him having the screen presence and persona to be an authority figure. John Sturges, who was always careful about casting for his supporting characters, used Robert Bray in that capacity in Never So Few. He has a very small role in Blood On The Moon which is about to appear on Blu-ray disc.
Click to expand...

Me, too! I was hoping this would be fun to watch, though it doesn't sound like it. I love Mickey Spillane. But what makes the books addictive isn't the sleaziness of the plots but the quality of the writing. Maybe 10 years ago the "Sunday Times Magazine" had a quiz in which you were supposed to pick which paragraph had been written by Hemingway and which by Spillane. It turned out the ones I thought were by Papa Ernest were actually by Spillane. He's a very fine and individual writer who kind of extended the "hard boiled" style to the nth degree, which is very hard to translate to the screen. Robert Aldrich came closest. Though KISS ME DEADLY might be considered "Anti-Spillane" in terms of its theme, it's also very faithful in reproducing Spillane's style and world-view.
Reactions: Darby67

Sure it's not a great film, but i will be upgrading my DVD to the blu ray on my next Importcds order.
Reactions: Darby67

Its was OK, C+.
The highlight for me was seeing Whitney Blake walking around in tight short-shorts. HUBBA-HUBBA!
Reactions: Timothy Bodzioney and RBailey
B 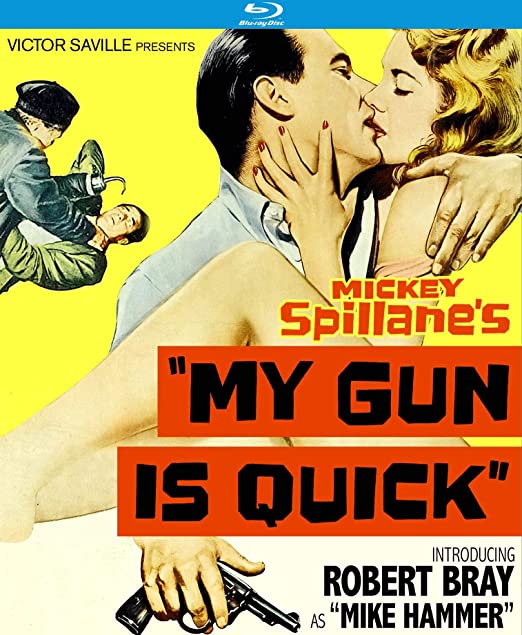