Victor Mature plays composer Paul Dresser in My Gal Sal, with Rita Hayworth co-starring as his muse. This lighthearted Technicolor musical from Twentieth Century Fox doesn’t break any new ground, but is a thoroughly enjoyable collection of jaunty songs with a dash of screwball romance to sweeten the deal.

Originally released in 1942 in glorious Technicolor, My Gal Sal was a musical biopic of 1890s composer Paul Dresser. Loosely based on a biographical essay written by Dresser’s younger brother, the film takes a highly fictionalized, though highly fun, look at Dresser’s life and career. As the film begins, Paul (played by Victor Mature) is leaving home, eschewing his family’s plans for him to enter the ministry and striking out on his own to try to make it as a musician. After a quick pickup job with a con artist earns Dresser a tarring and feathering, he picks up a job in a carnival. When a visiting actress, Sally Elliot (Rita Hayworth), hears Dresser’s songs, she quickly steals one for her New York musical revue. Though initially outraged by the theft, Dresser finds himself charmed by Sally, and while she thinks very little of him at first, the sound of his songs soon changes her mind.

As a narrative vehicle, My Gal Sal is as simple as they come. Boy writer meets girl singer, initial skirmishes turn to sweetness, and opposites attract. Almost nothing in it is true. But this isn’t a movie to watch for plot or truth; this is a movie to watch for the joyful lift of Dresser’s songs (augmented by contributions Fox songwriters Leo Robin and Ralph Rainger) and, above all, for the playful performances from Hayworth and Mature. The two leads have incredible chemistry, just as good when they’re at each other’s throats as they are locking lips. Though Hayworth doesn’t enter the picture until about twenty minutes in, once she appears, the film’s entire center of gravity shifts, and the purported biopic turns into something entirely more interesting.

Over the course of the film, a talented supporting cast fly in and out of the story, some with more backstory and resolution than others. Carole Landis, who was at one point in the running for the lead role, appears early on as an early love of Dresser’s during his carnival stint. When Dresser meets up with Sally, John Sutton is with her as her business partner, with perhaps an eye on something more. James Gleason is the right blend of gruff and charm as Dresser’s publisher, and Frank Orth steals a bunch of scenes as his printer. And, just when the movie seems to be winding down, Phil Silvers enters to do his thing. None of the characterizations are terribly deep, but casting the right group goes a long way towards bringing these people to life.

All of the songs appear in context of the story being told; mostly, it’s onstage through Rita Hayworth/Sal’s performances (dubbed by Nan Wynn), with some additional scenes with Victor Mature’s Dresser (dubbed by Ben Gage) composing the material. Hayworth’s big musical numbers are shown in the theater productions she stars in, with lavish scenery, flashy costumes, and choreography from Hermes Pan. Though these songs are not as well known today, they retain a certain easy charm; you might not known the words, but you’ll be tapping your toe by the end.

My Gal Sal is an utter failure as a truthful biography and an absolute success as a musical delight. The screenwriters (Seton L. Miller, Darrell Ware and Karl Tunberg) make the decision to go with the good story over the literal truth, and the story they do construct has just enough structure to allow the cast and the songs to do the heavy lifting. Irving Cummings directs with a light touch, trusting the material and talent, using only the barest minimum of camera flourishes and editing tricks. The film moves along at an energetic pace and wraps up just in time to leave the audience with a smile.

Presented in its original 1.37:1 aspect ratio, My Gal Sal is the rarest of things: a 1940s era Fox Technicolor production that still looks good today. While many of the Technicolor films from this period of Fox’s history look terrible due to poor archival decisions made at the time, somehow My Gal Sal (despite being subject to the same limitations in available elements) looks very good. Color is almost entirely consistent and even, with good looking flesh tones and reasonably good detail. The image itself is rock steady and very clean, with only the faintest blemishes appearing on very rare occasions. This is a very pleasing transfer.

The film’s monaural audio is presented via the lossless DTS-HD MA codec. Dialogue is well recorded and easy to discern. Music and vocal performances are equally well recorded, with a satisfying richness. There are no issues with any age-related artifacts. The track volume did seem a little on the low side, but once I adjusted the volume control on my receiver, I had no further issue.

Booklet – Julie Kirgo contributes an insightful essay which both reveals ways in which the film took liberties with its subject matter and how the film served as escapist fare to a World War II-era audience looking backwards towards memories of easier times. Also included are production stills and a poster art.

My Gal Sal is an utterly predictable yet utter pleasant fictionalized look at the career of songwriter Paul Dresser. Featuring charming leading performances from Victor Mature and Rita Hayworth, a handful of amusing supporting appearances, good songs and enjoyable choreography, the film still works today as lighthearted entertainment. Twilight Time’s release is light on supplements, though the isolated music track is a delight, and the transfer quality is far above average for this period of Technicolor releases from Twentieth Century Fox. 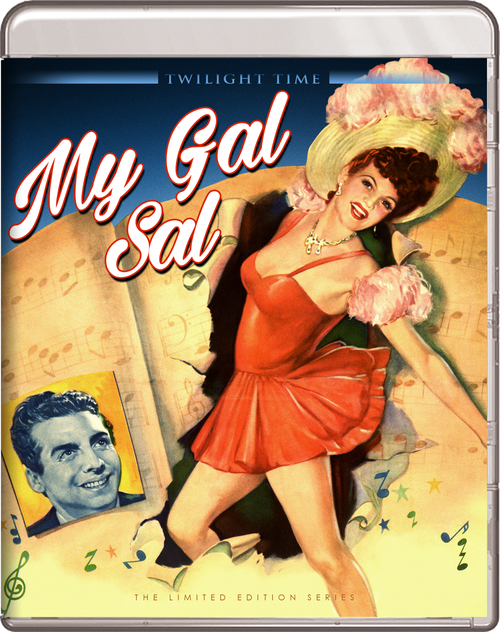