Forum List What's new Dark Style Change width
Log in Register
What's new Search
Menu
Log in
Register
Navigation
Install the app
More options
Dark Style
Close Menu
Posted on February 12, 2021 by Matt Hough
You are using an out of date browser. It may not display this or other websites correctly.
You should upgrade or use an alternative browser.
Doris Day flies particularly high in this arresting musical dramedy. 3.5 Stars

Michael Curtiz’s My Dream Is Yours is a solid second step in the ascension of Doris Day to the top of the cinematic world offering wonderful dramatic, comic, and musical opportunities for her, in all of which she excels.

After bringing the sunny personality and delectable singing voice of Doris Day to the big screen in 1948’s Romance on the High Seas, it was rather bold of Warner Brothers to next assign their new star to a slightly more serious endeavor, the remake of Twenty Million Sweethearts. Directed by Michael Curtiz with new songs provided by Harry Warren and Ralph Blane, My Dream Is Yours finds perky blonde Miss Day romantically involved with a real heel while a loyal, loving marriage prospect waits on the sidelines to be noticed. The film’s tone often veers quite hazardously from comedy to melodrama (with distinct connections to A Star Is Born), but some ace comic work from supporting players and some upbeat tunes save the day for Miss Day.

Radio singing sensation Gary Mitchell (Lee Bowman, vocals by Hal Derwin) has decided to end his contract with his agent Doug Blake (Jack Carson) and the talent agency run by demanding Thomas Hutchins (Adolphe Menjou) and make a new radio deal of his own with a new show and a new sponsor. Doug in a huff storms off and flies to New York to discover a new singing talent and finds one in Martha Gibson (Doris Day). When he brings the widowed mother back to Hollywood, they pound the pavement looking for jobs in radio, nightclubs, and big bands, all without success because Martha’s novelty tunes and singing style are not in vogue. By the time Doug realizes she also has a melting croon with ballads, Gary Mitchell has swooped in to capture Martha’s heart even though his ego and his increasing use of alcohol begins to take a toll on his desirability for a new radio hour.

The film’s script is by Harry Kurnitz and Dane Lussier with its adaptation from the original material by Allan Rivkin and Laura Kerr. While the tale of “looking to break into show biz” is nothing new, the narrative’s over-familiarity is spelled by four delightful new tunes by Harry Warren and Ralph Blane (the gorgeous title song which gets three separate performances in the movie, by Bowman/Derwin, by Day, and inevitably by both stars in a climactic duet: despite the reprises, it didn’t end up earning the authors a deserved Oscar nomination; the ebullient “Tic-Tic-Tic” buoyed by Day’s delightful rendition, “Someone Like You” which finally wins a radio contract for our girl, and “Love Finds a Way”). Just as good is the clever song that brings the new talent to the agent’s attention: a spirited words and music rendition of “Canadian Capers” which ended up being the big hit record from the movie. On the other hand, a change of pace fantasy sequence with Doris Day and Jack Carson playing Easter bunnies capering fairly mirthlessly with Bugs Bunny to the “Hungarian Rhapsody” retitled “Freddie Get Ready” arrives awfully late in the movie when we’ve finally gotten past all of the contrived obstacles the screenwriters have put in Martha’s path to block her discovery in Hollywood (including doing a hula number to “Nagasaki” in a dive nightclub to earn a little ready cash). Michael Curtiz directs smoothly and securely enveloping his singing star in lovely shadows as she sings the lullaby “I’ll String Along with You” to her nodding son.

First-rate with her singing and her acting, Doris Day takes another solid step to stardom in this film, her tearful goodbye to her child in an airport indicative of the great dramatic work that lay in her future while her vocals, whether upbeat or softly mellow, always deliver the goods. Jack Carson is a reliable leading man for her, just as he was in Romance on the High Seas: sincere and good-natured with a puppy-like need to be needed that’s very appealing. For comedy, the movie relies on the wonderful Eve Arden as the agency secretary who finances Doug’s search for a new talent and who gives forth with a barrage of great putdowns and wisecracks that make her an always welcome presence. S. Z. “Cuddles” Sakall does his usual malaprop-laden shtick as the finicky radio sponsor who prefers Viennese waltzes to bee-bop. As for Lee Bowman, he really plays a cad here (very well), egocentric and smug and imminently dislikable late in the film when Martha saves him at the microphone from a momentary lapse of confidence and he shows his appreciation by informing her there was room for only star in their family, and it would be him. Screenwriters like to set audiences up with couples where one clearly doesn’t deserve the other, but this one is very hard to take.

The film’s original theatrical aspect ratio of 1.37:1 is delivered on the disc in 1080p resolution using the AVC codec. Apart from the blurry and usually pretty awful stock footage, the image is quite beautiful with luscious Technicolor that’s nicely saturated and features especially realistic skin tones. The image quality is also a decided step up in sharpness and color accuracy from the high definition iTunes streaming version of this movie. There are no age-related problems at all with dust, dirt, splices, or spots. The movie has been divided into 49 chapters.

The DTS-HD Master Audio 2.0 mono sound mix offers that dynamic Warner Brothers brass sound in the orchestrations that is always unmistakable. Dialogue, music, and sound effects have been combined professionally in this mix, and there are no anomalies present meaning hiss, crackle, pops, and flutter have all been eliminated.

Michael Curtiz’s My Dream Is Yours is a solid second step in the ascension of Doris Day to the top of the cinematic world offering wonderful dramatic, comic, and musical opportunities for her, in all of which she excels. The Warner Archive Blu-ray is another superb Technicolor transfer leaving fans of Miss Day, musicals, or both flying high! Recommended!

Long time since I last watched this film. I'm not at all surprised that Lee Bowman is effective playing a cad because I have nearly always found him obnoxious on screen, particularly in the two films he made with Rita Hayworth. He was tolerable in the one he did with Lana Turner.

Thanks for the review. I look forward to receiving this disc.

Robin9 said:
Long time since I last watched this film. I'm not at all surprised that Lee Bowman is effective playing a cad because I have nearly always found him obnoxious on screen, particularly in the two films he made with Rita Hayworth. He was tolerable in the one he did with Lana Turner.

Thanks for the review. I look forward to receiving this disc.
Click to expand...

Poor Lee Bowman, LOL. Without looking it up, I believe he's also the weasely rich boy in BUCK PRIVATES, yes? I never believed Jane Frazee would choose him over the hot other dude (Alan Curtis?) in that one.

Having Jack Carson or Eve Arden in a film is reason alone for me to buy a film. Having both is even better !
You must log in or register to reply here. 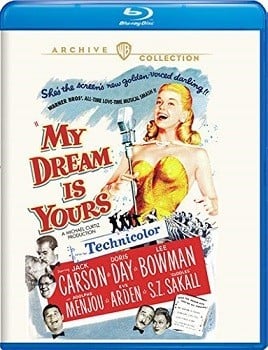