Forum List What's new Dark Style Change width
Log in Register
What's new Search
Menu
Log in
Register
Navigation
Install the app
More options
Dark Style
Close Menu
Posted on July 27, 2020 by Martin Dew
You are using an out of date browser. It may not display this or other websites correctly.
You should upgrade or use an alternative browser.

It’s reassuring to see more catalogue titles slowly emerging from various studios’ archives on 4K disc, and with America’s #1 movie director Steven Spielberg clearly backing the format wholeheartedly, here is part two of our Must-own Spielbergs feature with a selection of another three spinners. If you missed part one, please take a look here.

Now this may be a controversial entry, particularly when measured up against other compelling omitted 4K choices like Ready Player One (2018) and War of the Worlds (2005), but there is something iconic about Spielberg’s 1982 yarn E.T. surrounding a young boy’s friendship with a benign and goggle-eyed alien. Almost a companion piece to the Tobe Hooper-helmed and Spielberg-produced Poltergeist (also 1982), both films manage to imprint a cultural stamp on tract-housed middle America, and while illustrating how dreaming children can either respectively conjure up other-worldly friendships or nightmarish scares into their seemingly comfortable surroundings. The movie races into overdrive after the faceless authorities take control of this visitation from space, but are outsmarted by Elliot’s team of crack bike riders as they devise a satisfying plan to get the critter back home. Sadly departed Melissa Mathison’s script for E.T. was hardly earth-shattering (nor indeed was it for The BFG), but the Disney-like innocence on display here is just so hard to be cynical about. 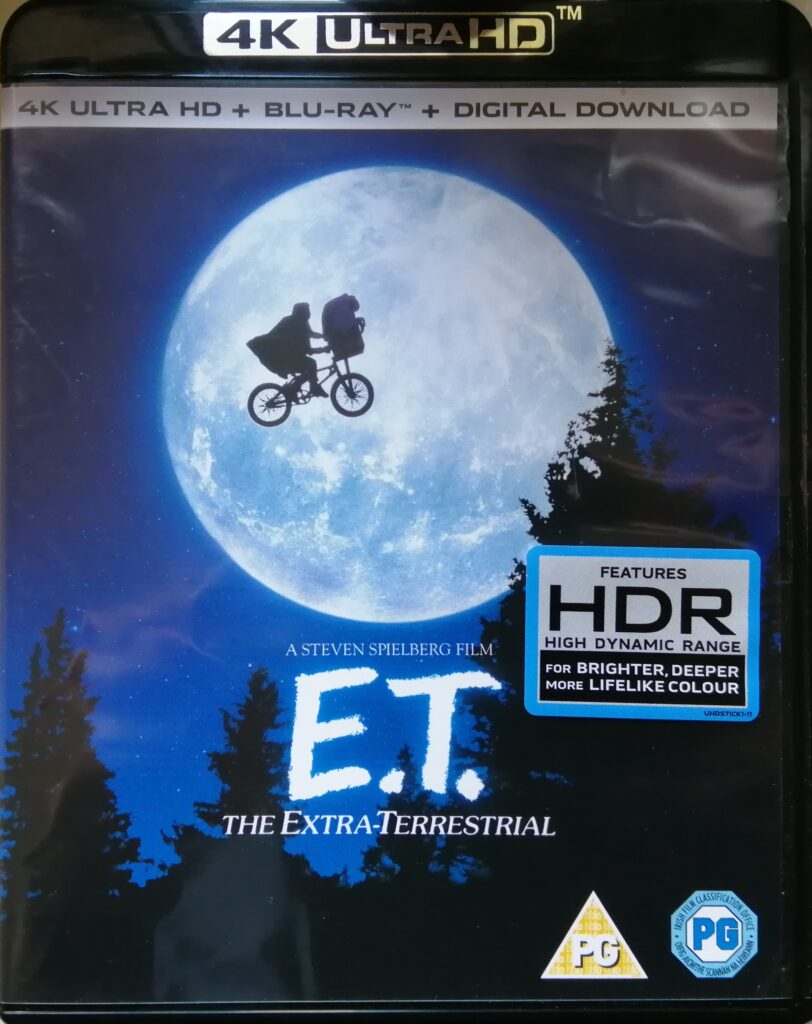 Everything you have read so far about the music score on this 4K UHD release is true. The dynamic recording of John Williams’s exhilarating melodies recorded at MGM fills up the entire immersive soundstage, as if the orchestra is in the room with you. As with other UPHE Spielberg titles, the 4K image is film-like and warm, with high dynamic range credentials clearly shining through in the night-time scenes of the spaceship in the forest at both the start and close of the film. The front of Elliott’s home and the street scenes also brim with extraordinary detail when compared to the SDR disc, and you can just revel in some of the luscious deep blacks on show and tasteful grain composition throughout.

Steven Spielberg has famously said of War of the Worlds (2005) that his vision of aliens arriving on Earth is an unmistakably “post 9/11” take on the subject. With an America (and world) that had lost its innocence on that fateful September day, it would have seemed inappropriate at the time to represent the visitors as anything other than aggressors. Like E.T. which came later, the director’s third theatrical feature film Close Encounters of the Third Kind (1977), however, does portray a friendly meeting with extraterrestrials, obviously of the type most audiences would wish for. Its story of Roy Neary (Richard Dreyfuss) making sense of his freaky brushes with UFOs and subsequent quest to expose the truth perhaps lacks the suspense of the director’s earlier Duel or Jaws features, but pays out big on intrigue. CE3K was a tour-de-force event movie in 1977 aided by its curiosity-arousing poster and associated marketing materials. Furthermore, we had all seen realistic spaceships in space thanks to 2001 and Star Wars, but to witness their bright lights and acrobatics in the environs of a sleepy Indiana town was pretty mind-blowing stuff back in the day. The 4K release includes all three versions of the movie, namely the Theatrical Cut, Special Edition and Director’s Cut. Columbia Pictures coaxed the director unwillingly into shooting the interior of the mothership for a 1980 Special Edition theatrical release, the result of which is cringeworthy to say the least, and should probably only be considered ‘further reading.’ Best to stick to the Theatrical Cut or Director’s Cut if you’re showing it to friends for the first time. 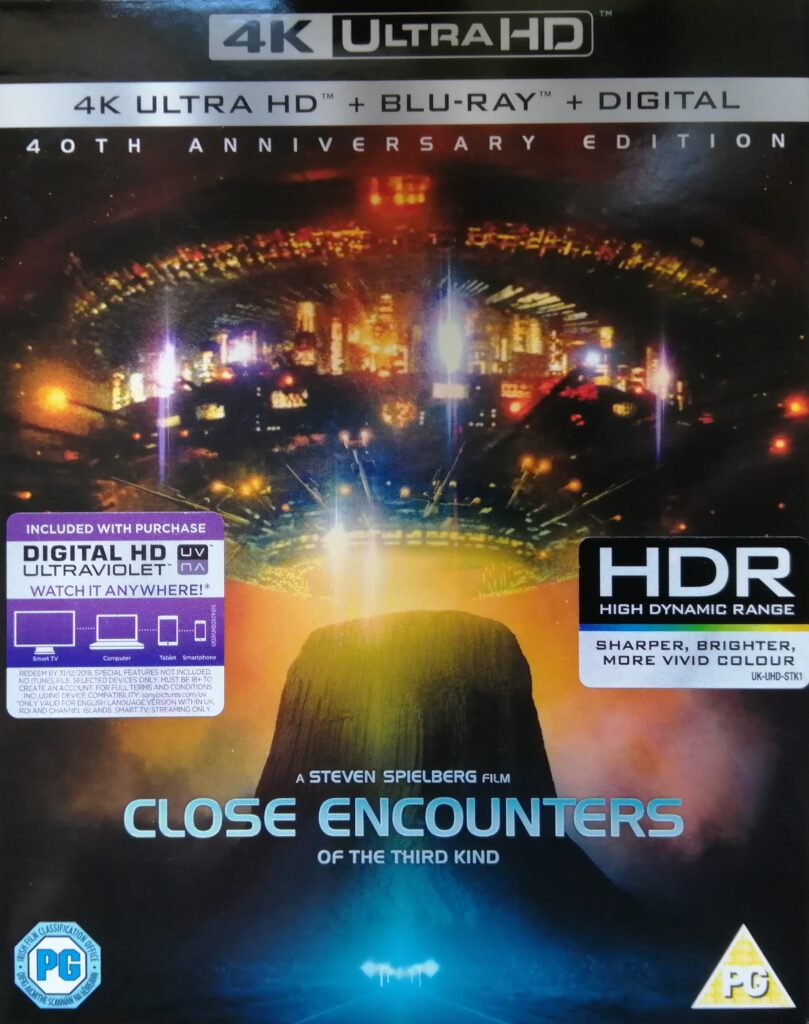 Sony Pictures Home Entertainment decided not to give us an immersive audio presentation from which it could certainly have benefitted, but instead the 4K package includes the bass-rich DTS-HD 5.1 audio from the original platter. However, there are some spectacular picture upgrades with this latest release, notably among the opening sandstorm sequence where the abandoned aircraft and diner look all the more tangible through increased resolution. There are also deep blacks on display throughout, glorious colors adorning the various spaceships and HDR specular highlights bringing the title bounding proudly onto the ultra-hi-res format.

If there is a such a thing as a perfect movie, then surely Spielberg’s 1975 storytelling of a great white shark terrorizing a small New England community must get close. So much has been written about the movie it is almost impossible to add anything of value. You can dip into your BD disc at almost any point and get hopelessly drawn in again. Whether it’s Chrissie’s brutal mauling in the opening sequence (still surely one of the most all-time shocking on-screen deaths), the desperate political situation on the island with Mayor Vaughan (Murray Hamilton) utterly unable to face the truth, the false sense of security hoisted onto the audience at every turn, or the intoxicating interpersonal dynamics of the three fated crew of the Orca fishing vessel during the second hour, Jaws is surely a textbook of what to do right when picking up a 35mm camera. The acting performances are universally formidable and there is hardly a duff or surplus line of dialog across the full 2-hour running time. You feel you know more about Police Chief Brody (Roy Scheider) during the first five minutes before he gets into his pick-up truck to head into Amity than some directors are capable of communicating about their lead characters in three hours. Of course there’s also the legendary editing of Verna Fields and a masterly score by John Williams. Most people are familiar with the heart-thumping two-note shark approach motif, but it is in the expansive symphonic sequences during the boat chases with their light-hearted references to seafaring folk songs that truly put their mark on this masterpiece. 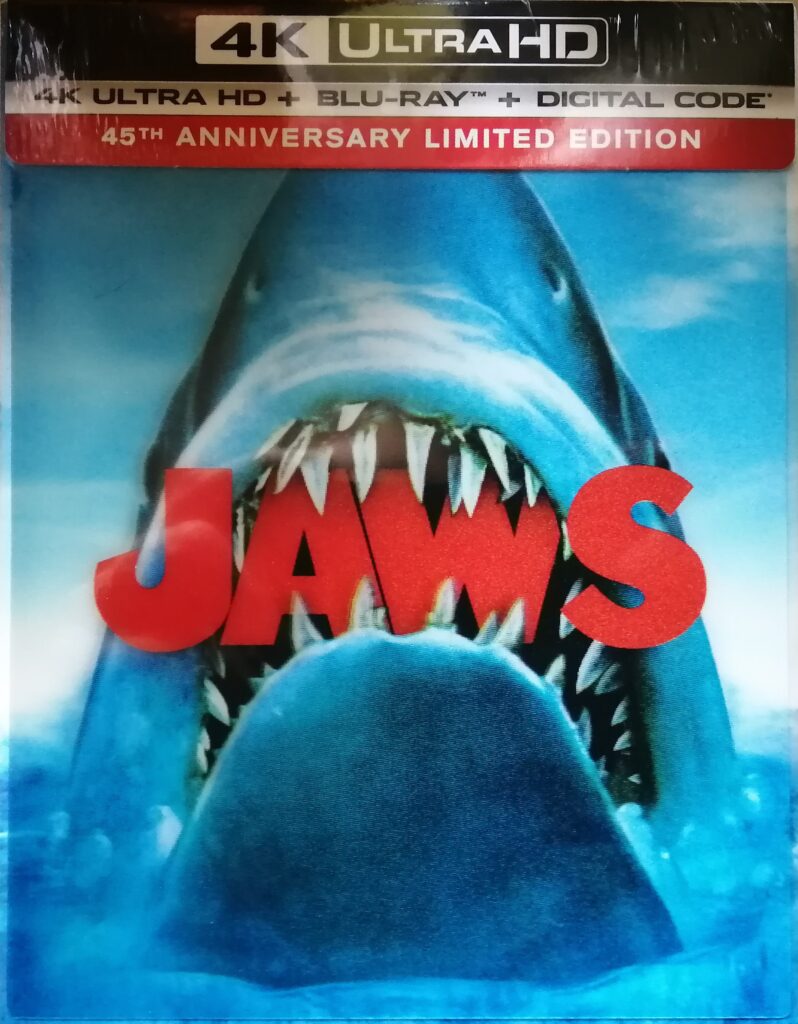 Last month’s 4K disc release of Jaws certainly did not disappoint. We might just have got as close now to owning our own premium 35mm print of the movie as we will ever be. Look at the fine resolution of textures of the wood slats both inside and outside the Orca, or the seemingly limitless grades of blue in the summer skies and seascapes. There are sequences where you will notice more pronounced grain – as in the Amity town center or on the public docks – but this only adds to the authenticity of the 2012 restoration. Add in a Dolby Atmos mix with the Williams score now seeping into your overheads, and offstage voices and effects you simply have not heard before, and you will wonder how you ever lived without Jaws on 4K.

“Now this may be a controversial entry, particularly when measured up against other compelling omitted 4K choices like Ready Player One (2018) and War of the Worlds (2005),”

Huh? Controversial how? E.T is infinitely more loved than either of those two films. I enjoyed both immensely but are nowhere near the brilliance of ET. It would have been controversial if you had omitted it.

By the way it’s Melissa Mathison, (formerly married to Harrison Ford who plays the faceless teacher in the film) not Marie.

Quote
“Add in a DTS:X mix with the Williams score now seeping into your overheads,”

Jaws has a Dolby Atmos mix. Not a DTS:X mix.

Tino said:
By the way it’s Melissa Mathison, (formerly married to Harrison Ford who plays the faceless teacher in the film) not Marie.
Click to expand...

Thanks for spotting typos, changes made.

The LSO played for JW on many of his scores but not this one. This was recorded at the Culver City studios (now Sony) by an orchestra of LA session musicians

The LSO played for JW on many of his scores but not this one. This was recorded at the Culver City studios (now Sony) by an orchestra of LA session musicians
Click to expand...

Thank you for clearing that up, Dave. I found two sources online stating LSO, but clearly unverified! I've changed the text.

I feel if anything was controversial about ET was weh Spielberg edited the guns out of ET and replaced them with walkie talkies! This was later corrected and I believe both versions of the film where made available later.

I think it's a wonderful film. I was surprised at the reaction in the first instalment that there was quite a bit of resistance to the film in the comments, but I know it's not to everyone's taste.
Last edited: Aug 4, 2020

Martin Dew said:
I think it's a wonderful film. I was surprised at the reaction in the first instalment that there was quite a bit of resistance to the film in the comments, but I know it's not to everyone's taste.
Click to expand...

He's talking, generally, about the anti-Spielberg ranting that infected Part One of his series.

@Martin Dew - I've really enjoyed both these articles. I love it when passion for movies or movie makers is what folk build their articles on. Thank you!

Neil Middlemiss said:
He's talking, generally, about the anti-Spielberg ranting that infected Part One of his series.

@Martin Dew - I've really enjoyed both these articles. I love it when passion for movies or movie makers is what folk build their articles on. Thank you!
Click to expand...

I agree. These are great threads.

Again my point is that ET is pretty much universally loved so there is nothing controversial about it in that regard, despite a few minority opinions.
Last edited: Aug 4, 2020

Tino said:
I agree. These are great threads.

Again my point is that ET is pretty much universally loved so there is nothing controversial about it in that regard, despite a few minority opinions.
Click to expand...

Yeah. I think ET is a classic but there are folk out there that don't see the appeal (they are clearly crazy)
You must log in or register to reply here.

Must-own Spielbergs on 4K part one