Edgar Allan Poe and H.P. Lovecraft both excelled in penning stories of psychological horror, but the movies often took a too literal and gruesome approach when bringing some of their celebrated works to the screen. A double feature Blu-ray release of Murders in the Rue Morgue (1971) and The Dunwich Horror both display occasional positives and numerous negatives to that approach of picture making.

Edgar Allan Poe and H.P. Lovecraft both excelled in penning stories of psychological horror, but the movies often took a too literal and gruesome approach when bringing some of their celebrated works to the screen. A double feature Blu-ray release of Murders in the Rue Morgue (1971) and The Dunwich Horror both display occasional positives and numerous negatives to that approach of picture making. The Blu-ray release, however, does present these films nicely for fans of these cult favorites, and in the case of the first film, it’s the director’s cut and not the botched theatrical release which is offered here.

A number of present and former actors at the Rue Morgue Theatre in 19th century Paris are meeting grisly deaths by acid, administered by former actor Rene Marot (Herbert Lom) assisted by his dwarf colleague Pierre (Michael Dunn). The motives seem to swirl around the current stars of the Grand Guignol melodramatic adaptation of Edgar Allan Poe’s “Murders in the Rue Morgue,” Cesar Charron (Jason Robards) and his young wife Madeleine (Christine Kauffmann). Charron and Marot had once been in an acting company with Madeleine’s beautiful mother (Lilli Palmer) and had both loved her, but when Marot was disfigured by an on-stage accident and the mother later turned up murdered, Marot had become reclusive until he could solve the mystery of who was responsible for his injury and his fiancé’s murder.

With Poe’s famous story (already filmed twice in Hollywood) used only for tiny bits and pieces of the on-stage melodrama that draws all of the main characters to it, Christopher Wicking and Henry Slesar’s screenplay instead involves the mystery and revenge plot of these actors filled with additional murders and supplemented by lots of visions, dreams, and flashbacks. Filmed in Toledo, Spain, which does a superb job of standing in for 19th century Paris, the movie works in fits and starts with a decent mystery to untangle but with those increasingly irritating Madeleine dream/fantasy sequences which keep intruding into the story and stifling the forward momentum of the crimes and the investigation (being led by Adolfo Celi’s lead detective Vidocq). The movie looks very expensive (it was made for less than a million dollars), and director Gordon Hessler stages some good chases and one smooth murder on a carousel that happens in a single revolution of the merry-go-round. Herbert Lom’s scarred maniac recalls his performance in the 1960s in the remake of The Phantom of the Opera (we even get a climactic scene where his caped, masked figure pursues the frightened damsel through a theater’s wings, staircases, and catwalks) and is the best performance in the movie. Michael Dunn is properly enigmatic as the henchman even if we see him stabbed in the heart and yet he seems fit and fine when next we see him, one of a number of implausible facets to the storytelling. Jason Robards is rather routine in the leading role, and Christine Kauffmann often seems anesthetized in her performance. Lilli Palmer makes the most of her couple of scenes as the unfortunate mother.

An unusual young man Wilbur Whateley (Dean Stockwell) comes to a New England university looking for a treasured volume The Necronomicon, a book which he hopes will open the door to returning his ancient (inhuman) ancestors to the earthly realm. His ritual also requires a virgin sacrifice, and he uses hypnotism and drugs to make college student Nancy Wagner (Sandra Dee) more pliable to his will. Nancy’s best friend Elizabeth (Donna Baccala) and Professor Henry Armitage (Ed Begley) attempt to rescue Nancy before it’s too late, but Wilbur’s incantations have already begun the restoration process.

With Rosemary’s Baby earning amazing box-office returns for Paramount, it’s not surprising that Roger Corman and his American International would want to tap into that lucrative market. Thus, the first half of The Dunwich Horror has tonal values and moods very reminiscent of the Roman Polanski classic (down to an unsettling impregnation sequence with unreal, demonic imagery). Daniel Haller’s direction rather collapses in the film’s second half as Wilbur’s unnatural twin is unleashed on the world (poorly represented by colored filters and windswept water and foliage) and suspense flags to miniscule proportions the longer the movie runs. Dean Stockwell and Sandra Dee do what they can with somewhat weak material (pacing and interest really run out as his dull reawakening ritual goes on and on), but old pros Ed Begley and Sam Jaffe (as Wilbur’s grandfather) sell every scene and make them work.

Both films are presented in a 1.78:1 aspect ratio and are offered in 1080p resolution using the AVC codec. For Murders in the Rue Morgue, sharpness is outstanding, and color is lush and beautiful with very believable and appealing skin tones. Contrast has also been used consistently and well to bring forth truly excellent image quality. There are a couple of slight scratches and a blip or two of debris on occasion, but there are no serious problems with age-related artifacts. For The Dunwich Horror, sharpness isn’t quite as impressive, sometimes owing to obviously slack focus pulling. Color is very good and skin tones are believable. Contrast is less consistent here, and there are a few more specks and (surprisingly!) reel change markers still present with this transfer. Each movie has been divided into 8 chapters.

The DTS-HD Master Audio 2.0 mono soundtrack for each movie is very much what one would have heard during both of these movies’ theatrical releases. Dialogue is always easily discernible and has been mixed well with the background scores and atmospheric effects of the movies. No age-related problems with hiss or crackle mar the aural presentations. The low end for The Dunwich Horror is the less impressive of the two audio encodes.

Audio Commentaries: film historian Steve Haberman offers well-researched commentaries for each of the movies (maybe even a bit too well researched as he goes into lengthy credits and biographical information for several members of the crew while other leading players like Adolfo Celi are sometimes ignored). He even tries, unsuccessfully, to mimic the voices of Alfred Hitchcock and Christopher Lee as he reads quotes by them. Still, these are informative and very useful commentary tracks.

Stage Tricks & Screen Frights (11:39, HD): director Gordon Hessler shares his memories of working on Murders in the Rue Morgue offering opinions on the Spanish locations, the eight week shooting schedule, working with Jason Robards, Michael Dunn, and Christine Kauffmann, and his disenchantment with the way the film was handled by American International for theatrical release.

Theatrical Trailer for Murders in the Rue Morgue (2:52, HD)

The movies may not be great films, but Murders in the Rue Morgue and The Dunwich Horror still make welcome additions to the list of Blu-ray releases of cult horror material, and a two-for-the-price-of-one release is nothing to sneeze at for fans of the genre.

Oh man! That review totally missed the best thing about the film... the Les Baxter score! That is one of the best horror movie soundtracks ever!
Reactions: Virgoan

Henry Slesar, who co-wrote the script of Murders in the Rue Morgue, was a prolific mystery writer who had many of his short stories turned into episodes of Alfred Hitchcock Presents and other TV shows, such as The Twilight Zone, The Man From U.N.C.L.E. and Batman. He lived in my home town and was a patient of my father, who was a family doctor. During the last years of his life I had a number of e-mail exchanges with him. He remembered my father well and we had several e-mail conversations about his work and mysteries in general. In 1989 an anthology of his Alfred Hitchcock Presents stories was published as "Death on Television: The Best of Henry Slesar's Alfred Hitchcock Stories."

Tonight I watched Dunwich Horror, which has been a favorite for a long time. I totally saw a new side of this movie. I don't know if I've ever seen it in the proper aspect ratio, but most of all the color and sound were a revelation. It had scenes that were obviously influenced by the colored lighting in Bava's Black Sunday. On top of that, I figured out why the movie is so unique... they cast the most goofy actor who ever lived as the lead and put a fake mustache and mutton chops on him, then they hired a crew to shoot the movie who were more suited to an episode of Columbo or Ironsides. When they looked at the rushes, they must have panicked and hired an editor who was the kind of person who would cut a psychedelic hippie movie like Psych Out to finish it. This is three movies going on at the same time. The wild colors! The exaggerated acting with all the eye widening and crazy poses... then the second unit sex stuff piled on top! Holy cow! What a crazy movie. The soundtrack by Les Baxter totally nails every single one of those dichotomies. What a great movie. What a great blu-ray too. The colors were MUCH more vivid than I've ever seen before and the low frequencies in the soundtrack made my walls rumble. Great stuff. Can't wait to see the monkey movie. Never seen that one before. 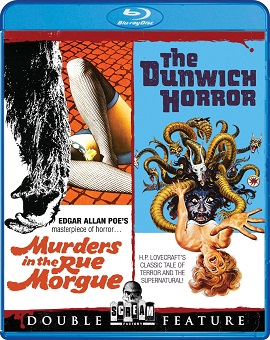