Forum List What's new Dark Style Change width
Log in Register
What's new Search
Menu
Log in
Register
Navigation
Install the app
More options
Dark Style
Close Menu
Posted on March 4, 2018 by Neil Middlemiss
You are using an out of date browser. It may not display this or other websites correctly.
You should upgrade or use an alternative browser.
Handsome production, fine cast, and a promising start to Poirot's Big screen return 3.5 Stars

“You know, there is something about a tangle of strangers pressed together for days with nothing in common but the need to go from one place to another and never see each other again.”

World-renowned detective, Hercule Poirot, upon solving a crime in Jerusalem, receives a telegram requesting his services in Istanbul. He finds accommodation aboard the luxurious Orient Express, a train that will take him and an eclectic collection of passengers to their destination through the mountains. When the train is delayed by a snowstorm one of the passengers is found murdered. Every one of Poirot’s fellow passengers is a reasonable suspect; the governess (Daisy Ridley), the doctor (Leslie Odom, Jr.), the professor (Willem Dafoe), the princess (Judi Dench) and her maid (Olivia Colman), the missionary (Penelope Cruz), the widow (Michelle Pfeiffer), the gangster (Johnny Depp), his butler (Derek Jacobi) and his assistant (Josh Gad), an entrepreneur (Manuel Garcia-Rulfo), and the count (Sergei Polunin) and countess (Lucy Boynton). While the train is stuck, Hercule Poirot has a chance to solve the difficult case before the track has been cleared.

Agatha Christie’s Murder on the Orient Express was first published in the United Kingdom in 1934 to high praise. A delightful,  perfect setting for a murderous crime, and for Christie’s astute, erudite, and polished detective with an ample-ego, a perfect match. The confines of the travelling train, the late night murder where the murderer, by way of isolated settings, must be among the remaining passengers, makes for a compelling entertainment. So, while this story has been visited many times by many productions, it’s an understandable choice to remake for the big screen. Though Agatha Christie would, late in her career, grow tired and even resent her world-beloved Belgian detective, it is stories like Murder on the Orient Express that remind us why this detective is such a delight to watch. Presented with a mystery, a myriad of suspects, and little time to solve it, there’s fun in watching Poirot read the responses and lies of the suspects, and arrange the truth for us to enjoy.

For this latest adaptation of Murder, a good cast has been assembled, many of whom have worked before with the film’s director and star, Kenneth Branagh. Of the large cast, Johnny Depp stands out with a strong but brief presence as the unseemly gangster, Edward Pratchett. Josh Gad also stands out as MacQueen, assistant to Pratchett. Michelle Pfeiffer’s boisterous Caroline Hubbard is another notable performance in a string of notably performances of late (most recently, her turn in Aronofsky’s divisive mother!). The young Daisy Ridley holds her own well, and Leslie Odom, Jr., who recently won deserving praise for his performance in Hamilton on Broadways, delivers one of the film’s best performances, too.

Adaptations of Murder on the Orient Express often thrive on the quality of the cast, and while this version assembles a good one, opportunities to showcase them fully are missed. Branagh pulls back the cover on too few. The aforementioned actors delivering notable performances aside, the remaining characters feel a little shortchanged. In particular is Olivia Colman’s Hildegarde Schmidt, who serves as Princess Dragomiroff’s (Judi Dench) quiet assistant. A few more scenes with the under-served characters, and a little added to the running time, would have made a difference here.

Kenneth Branagh’s eye for a sumptuous production is a fine fit for this tale. A lavish adaptation, directed with meticulousness and care, along with nice flourishes and some very well-choreographed moments. The opening sequence, not connected to the primary plot, is a clever primer on what we can expect from the famous detective. A fun moment for those of us deeply familiar with the detective, and a rather good foundational introduction for those who might be meeting him for the first time. Branagh’s craft is on full display, and while he has always been comfortable starring in films he directs, it remains impressive to see a detailed production and fine performance born from the same artist.

Branagh’s Murder on the Orient Express is the kind of cinema I hope to see more of. It’s the kind of cinema we need to see more of; adult-oriented tales, wonderful production values, engaged casts, and nary a superhero or robot fighting to be found (and, to be honest, I enjoy those movies too, but yearn for more balance). And despite the flaws, such as the steps away from the root material that work in some ways and trips in others, the film is a compelling watch.

Branagh has lofty shoes to fill. He’s following in the footsteps of actors like David Suchet’s near-universally loved portrayal, and one of my favorites, Albert Finney’s turn as the mustached master in Sidney Lumet’s 1974’s film. There are many other filmed performances by different actors, fifteen or so, who have sought to bring Agatha Christie’s character to life. With more installments on the big screen where Branagh assumes the role, he too could becoming a favorite. His precise portrayal, with piercing, evaluating stares, and insufferable yet enchanting mannerisms and quirks, is fun to watch. I, for one look forward to seeing how more deep he can become Poirot.

Fox’s Murder on the Orient Express arrives in a superb looking Blu-ray. Filmed in 65mm, everything is a delight. Colors are positively vibrant without betraying the film’s tone, flesh tones are natural, fine detail is exquisite, shadow detail is excellent, as is contrast overall. So handsome a production, this film would have been quite something to have seen on the big screen.

Featuring an English 7.1 DTS-HD Master Audio track, Murder on the Orient Express delivers in the audio department, but isn’t flashy. There are plenty of ambient sounds from the travelling train, but the audio is largely focused on dialogue and Patrick Doyle’s score. And with lots of little creaks, pops and scene-specific sounds that play, sometimes subtly, in the left/right and surrounds from time-to-time, it helps pull you in.

A better than expected collection of special features with a little of everything. Behind the scenes views, some interesting interviews (with Agatha Christie decedents), a healthy batch of deleted scenes, and an informative commentary track by director/star Kenneth Branagh and screenwriter Michael Green.

While there is a look at the large format filming process, I would have welcomed a dedicated feature on it. The theatrical trailer is also included. I’m rather fond of the unexpected, contemporary flavor of the trailer which I have to believe helped pique the interest of otherwise potentially uninterested newcomers.

Except for the fact that I don't think that the gangster (Johnny Depp) is a suspect, I agree with everything that you said about the production. I saw it in the theater, thanks to MoviePass and except for the fight which I thought was out of character I was quite pleased. The beginning, concerning the stolen icon, was not in the book and I thought that was a nice addition to the story.

In the end I went to view the film 4 times at the Cinema loving the masterly direction and look of the film. We acquired the Blu-Ray and along with the film watching the making of it and joy of seeing those 65mm cameras in action this film will rest fairly high up the BR stack for some time.
You must log in or register to reply here. 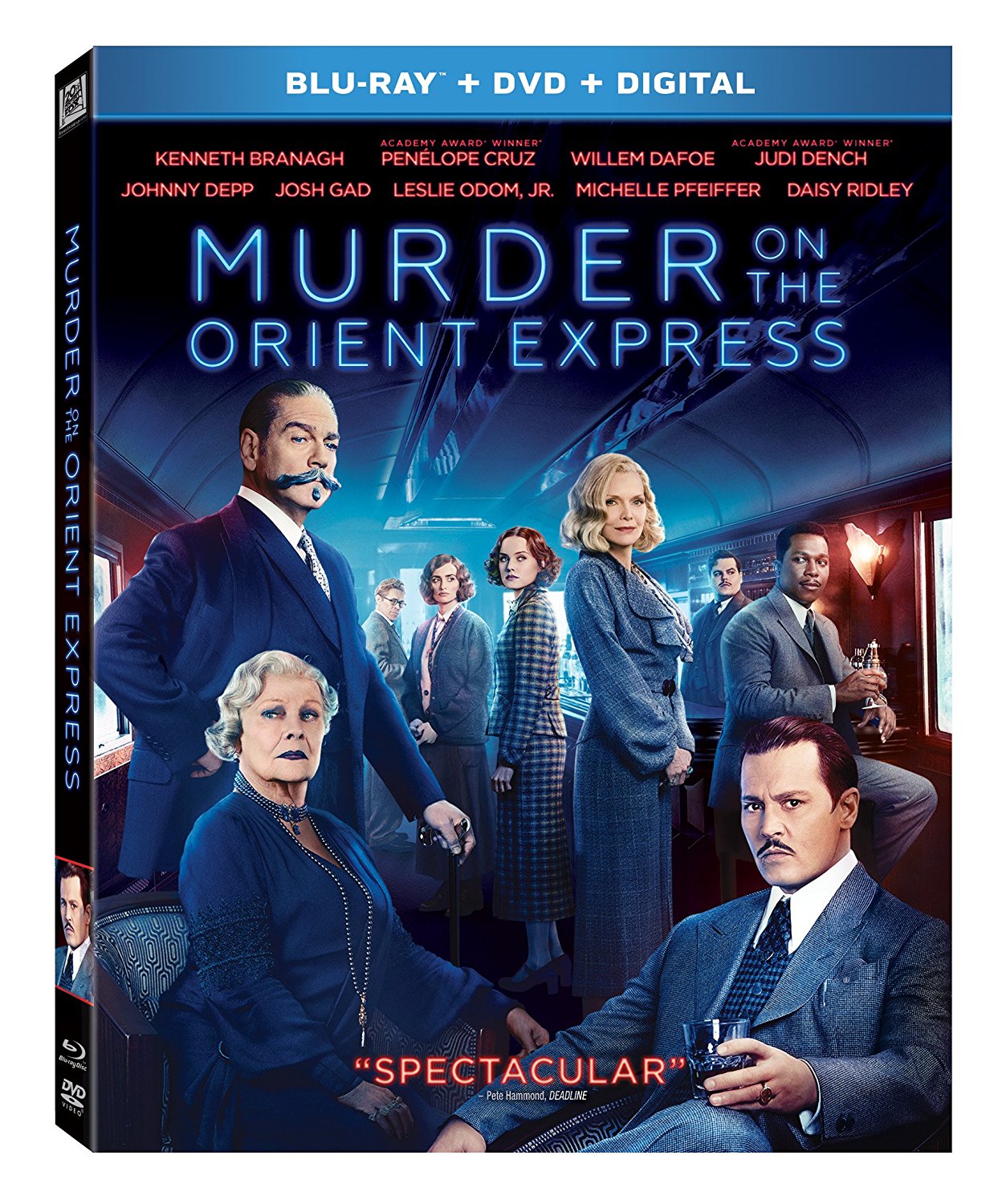