There are dastardly people and pranks afoot among the Arkansas hills in George Marshall’s dark comic farce Murder, He Says.

There are dastardly people and pranks afoot among the Arkansas hills in George Marshall’s dark comic farce Murder, He Says. With some great character actors establishing the essence of shadowy hillbilly shenanigans, Fred MacMurray finds himself knee deep in secrets and lies in this comedy classic. Kino Lorber has added another Paramount gem to their rapidly expanding line of Studio Classics.

Pete Marshall (Fred MacMurray) is sent as a replacement to the mountain district town of Plainville when a public opinion surveyor who went there goes missing. Visiting the hillbilly family of Mamie Fleagle (Marjorie Main), Pete begins to suspect that she and her two sons (both played by Peter Whitney) have murdered the surveyor. Pete then believes that Mamie and her husband (Porter Hall) are slowly poisoning wealthy Grandma Fleagle (Mabel Paige) who allegedly knows the secret to the whereabouts of $70,000 of stolen bank money. When Claire Matthews (Helen Walker) arrives with her own reason for needing to find the money, Pete vows to help locate the hidden loot with only a mysterious sampler as the clue to the money’s location.

Lou Breslow’s screenplay was originally intended for Bob Hope and Paulette Goddard as a follow-up to their riotously successful comic-horror farce The Ghost Breakers, also directed by George Marshall. Even without the expert comic playing of those two stalwarts, Murder, He Says works its moody comic mayhem on an audience quite successfully. The backwoods ambiance is well established and sustained by director George Marshall and with most of the movie happening at night, the shadowy crumbling manse with its hidden passageways, creepy basement, and hidden attic room serves both the farce and the suspense rather well (aided by a shadowy gloved figure creeping around the house and springing out when one least expects it). Though the film runs only a touch over 90-minutes, there’s not really enough plot to cover that amount of time necessitating some extended chases and slapstick encounters that sometimes run on past the point of effectiveness. On the whole, however, Marshall keeps things moving, and the comic conclusion involving a hay baler works very well indeed.

Fred MacMurray is not a natural fit for the role of Pete Marshall; he comes off as more intelligent than the character onscreen is allowed to be, but he gets with the spirit of the farce and makes the part his own. Helen Walker’s initial portrayal of a gun moll and later revelation as a nice girl gives her a fun character to play, and she does it very well. As always, Marjorie Main steals all of her scenes even though she’s playing mean and rotten here while wielding a wicked bullship. Peter Whitney gets the plum role of twins which he does expertly aided by some first class special effects work. Jean Heather as simple-minded daughter Elany Fleagle who unknown to everyone holds the key to the mystery and Porter Hall as the suspiciously good-natured Mr. Johnson are both excellent with Heather’s work quite poignant in places. Barbara Pepper makes a late-film appearance as an escaped convict who’ll do anything to find that stolen money.

The film’s 1.37:1 theatrical aspect ratio is faithfully rendered in 1080p resolution using the AVC codec. Apart from a slight scratch or two and some varying black densities, the image is beautiful with rich black levels and deep shadows. Whites are quite bright, especially the glowing effects which are a running motif in the movie.

The DTS-HD Master Audio 2.0 mono sound mix is very typical of its era. Dialogue is clear and cleanly recorded and presented, and the sound effects are crisp and nicely defined.  Music cues only occur over the main titles and at the end of the film, a simple tune which is also sporadically hummed, sung, or played on a pump organ during the movie.

Audio Commentary: film historians Michael Schlesinger and Stan Taffel have a cheery, chatty commentary about the film naming many of the famous character actors who pop up on screen and giving some interesting background on the leading players, director, and other behind-the-scenes contributors to the movie’s success.

A darkly daffy farce with fine work by Fred MacMurray, Marjorie Main, and Peter Whitney and with solid direction by George Marshall, Murder, He Says is well worth seeing for either the first or the fiftieth time. Kino Lorber has done a splendid job packaging the movie in high definition for fans of the stars, director, or genre. Recommended!

Great review Matt, thanks! I had NO idea this was originally planned for Hope and Goddard!
Reactions: Matt Hough and ahollis

To echo Will, thanks for the fine review. I didn't know it was originally planned for Hope and Goddard either. That casting would've worked too, perhaps moreso. My BD is still in the mail that I hopefully will get on Monday.
Expand signature
Crawdaddy's favorite "The Mandalorian" Quotes: "This is the Way" and "I have Spoken"

Another one I never expected to see on Blu-Ray.

Been eagerly anticipating this ever since it was announced last year. Fell in love with it when it finally aired on Turner Classic Movies a decade or more ago.

I'm thrilled to see this one arrive on BR. I refused to purchase the TCM/Universal MOD due to receiving a blank disc in another of the TCM MOD releases only to have them refuse to replace the set or disc (it took getting Universal involved to get satisfaction). This one's high on my acquisition list.

Like others have said, I had no idea this was originally to be a Hope/Goddard film.

Haven't seen this, but it sounds really good - I usually don't do blind buys, but am tempted by this one.

Randy_M said:
Haven't seen this, but it sounds really good - I usually don't do blind buys, but am tempted by this one.
Click to expand...

Hey, it's worth it just for the socko-boff commentary!
Reactions: lark144, ahollis, MaconBacon and 1 other person

cadavra said:
Hey, it's worth it just for the socko-boff commentary!
Click to expand...

I'm afraid that commentator is rather ubiquitous of late, though I did appreciate The Two Michaels' Laurel & Hardy roots ( on the HOLIDAY disc).

lark144 said:
I'm afraid that commentator is rather ubiquitous of late, though I did appreciate The Two Michaels' Laurel & Hardy roots ( on the HOLIDAY disc).
Click to expand...

Well, I don't know. He was rather hard on Ann Harding, in my opinion much preferable to Hepburn. I think I'll stick with Stan Taffel. Hi, @cadavra Mike. Sorry we won't meet this June! Take care. We are well.
Reactions: cadavra

bujaki said:
Well, I don't know. He was rather hard on Ann Harding, in my opinion much preferable to Hepburn. I think I'll stick with Stan Taffel. Hi, @cadavra Mike. Sorry we won't meet this June! Take care. We are well.
Click to expand...

I agree. He was way too hard on Ann Harding. I was referring to the repartee between the two Mikes, rather than any specific opinions, which I would like to agree with, as they were so entertaining to watch.

This is a very entertaining movie. I thought the commentary was excellent. Much better than what they've been calling commentary lately. This commentary actually offered lots of background info on the players and the production. He even pointed out cool things like sometimes Fred had his wedding ring on and sometimes he didn't, even though his character is supposed to be single, Fred didn't like to take his wedding ring off. Also, there's a shot of him looking in the mirror in the closet and the fluorescent light goes off before the shot cuts and you can see he has the glow makeup on. He also pointed out how the matt shot on the twins shows in one shot. And the print looks very good. Great buy for 16 bucks! And something I'll watch over and over because it's so much fun.
Reactions: cadavra and LeoA

bujaki said:
Well, I don't know. He was rather hard on Ann Harding, in my opinion much preferable to Hepburn. I think I'll stick with Stan Taffel. Hi, @cadavra Mike. Sorry we won't meet this June! Take care. We are well.
Click to expand...

Thanks, Jose, glad to hear you and yours are safe! 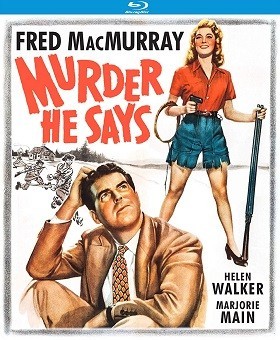