Unique animated effort is worth a look. 3.5 Stars

The Greeks had several majestic mythological tales about the origins and movements of the sun and moon in the sky, and now the French have come up with their own variations in Alexandre Heboyan and Benoît Philippon’s Mune: Guardian of the Moon.

The Greeks had several majestic mythological tales about the origins and movements of the sun and moon in the sky, and now the French have come up with their own variations in Alexandre Heboyan and Benoît Philippon’s Mune: Guardian of the Moon. In this unusually constructed and amusingly animated fantasy tale set in a world other than our own, creatures large and small learn valuable lessons about cooperation and the art of give and take, and even if the tale is fairly predictable once its players are set into motion, the stylized animation and the engaging performances (both in English and French) save the day.

After three hundred and fifty years of maintaining the movement of the sun and moon across the sky, their elderly guardians choose their young successors: the strapping, egotistical Sohone (Omar Sy in French, Rob Lowe in English) will now control the sun and the timid, naïve Mune (Michaël Grégorio in French, Joshua J. Ballard in English) will have control over the moon. But almost immediately, Mune makes mistakes that cause the moon to float away, and spurred on by the jealous Leeyon (Féodor Atkine in French, Christian Slater in English) who had wanted the moon guardianship for himself, Sohone is encouraged to leave his sun post and assist the helpless Mune while Leeyon takes the moon for himself and promptly sees it disintegrate before his eyes. With the sun unattended, its long ago guardian Necros (Eric Herson-Macarel in French, Davey Grant in English), now banished to the underworld, captures the blazing orb and snuffs it out, daring anyone to defy him to reclaim it. Meanwhile, Sohone and Mune realize they must work together to reclaim their rightful places in the universe, and to assist them, the waxen creature Glim (Izïa Higelin in French, Nicole Provost in English) who is much more knowledgeable about the histories of both the sun and the moon offers her services.

The screenplay by director Benoît Philippon (who created the original story) and Jérôme Fansten introduces the viewer to a vast quantity of new and strange creature-characters which might cause some initial discomfort in trying to keep everything sorted and in place as one pieces together the mythos of this unique planet. Eventually, things fall into place; indeed, the story becomes almost too familiar with its juvenile love story blossoming between Mune and Glim and the dawning on Mune and Sahone that each needs the other in order to exist and that it’s teamwork between the two which will be the only way each one of them can achieve his objectives. Those themes are pretty transparently obvious, so it’s fortuitous that directors Alexandre Heboyan and Benoît Philippon have spiced up the production by mixing and matching CG animation with hand-drawn sequences. The latter occurs when there are flashbacks to recall, for example, Necross’ fall from grace or when the trio of Mune, Glim and Sahone enter the land of dreams (where Mune’s powers are at their height). Throughout, the animation is never as polished as something we’d find in a Pixar or DreamWorks film, and that look is intentional: by fashioning this unique world with its weird creatures and sun and moon pulled across the sky on ropes and strings, the filmmakers have created their own universe, and while the qualities of love, hate, jealousy, friendship, intimidation, and helplessness found there are universal, it’s still a world we’ve never seen before, and that gives it quite a bit of majesty.

While all of the performances are excellent, the English casting supersedes the French casting in all three of the younger roles in the story: the French actors who play Sahone, Glim, and Mune (Omar Sy, Izïa Higelin, Michaël Grégorio) sound much more mature than their English counterparts (even though Rob Lowe who plays Sahone in English is probably older than all of the French actors, but he doesn’t sound it at all, and Nicole Provost and Joshua J. Ballard are unquestionably younger) and thus are less appealing as they struggle and stumble through their topsy-turvy first moments at their jobs. It’s a pretty equal field of battle between Eric Herson-Macarel and Davey Grant as the villainous Necros. Patrick Poivey and Jeff Dunham do equal justice to the underwater creature Phospho who comes to the aid of the three youngsters, and Christian Slater and Féodor Atkine are equally effective as the envious and embittered Leeyoon who wanted the moon guardianship position for himself. In the English-language version, it’s easy to hear Patton Oswalt and Ed Helms as a pair of Necros’ diabolical henchmen who, quite naturally, are bungling idiots and actually help lead to his downfall.

The film is presented in its theatrical 2.40:1 aspect ratio and is offered in 1080p resolution using the AVC codec. Sharpness is strong throughout and equally detailed in both the flat animation and the CG renderings. Color saturation levels are likewise controlled and appealing with no problems with bleeding though some purple backgrounds do give rise to some noticeable banding. Black levels are beautifully inky especially in the underworld sequences. The movie has been divided into 12 chapters.

The DTS-HD Master Audio 5.1 tracks are available in both the original French language mix and the English language version. Dialogue has been excellently recorded and gets very effective placements during the film, sometimes in directional ways that give the entire sound design an added layer of depth. Bruno Coulais’ unusual music score gets the full surround treatment in the mix and is most impressive.  Ambient effects are likewise placed properly in the fronts and rears through some may find their use less sophisticated than in American animated films.

The Making of Mune (42:15, HD): directors Benoît Philippon and Alexandre Heboyan, producer Aton Soumache, art director Remi Salmon, and other behind-the-scenes crew members discuss the production of the movie from conception to completion including Philippon’s inspiration for the story, the design of the movie (with some early test frames shown), the inspirations from American animated pictures, the visual style of the picture, the array of characters created for this new world, the creative use of music, and the mix of animation styles worked into the storytelling.

The Art of Mune (2:47, HD): a montage art gallery of characters and backgrounds used in the production of the picture.

The fanciful story being told and the unique animation techniques on display give Mune: Guardian of the Moon a look and personality quite different from American animation product. The Blu-ray release, while only in 2D and not in the theatrical 3D rendering, offers very good audio and video quality and might be a film that animation gurus would consider at least for a rental.

While I haven't seen it personally, it was a big hit with those in my family who have seen it.

Adam Gregorich said:
While I haven't seen it personally, it was a big hit with those in my family who have seen it.
Click to expand...

Did they see the original French language version or the American version? I have to say that although I usually prefer these films in their original languages, I really had a definite preference for the American actors with this title. 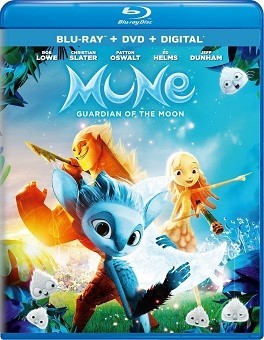