A story of survival amid burgeoning love between two polar opposites, Hany Abu-Assad’s The Mountain Between Us hits many overly familiar beats, but that doesn’t make it any less exciting or engrossing.

A story of survival amid burgeoning love between two polar opposites, Hany Abu-Assad’s The Mountain Between Us hits many overly familiar beats, but that doesn’t make it any less exciting or engrossing. Its very predictability in the later reels actually offers a strange sense of security as one watches the couple defiantly struggle against the odds for both living and loving.

Desperate to get to New York from Idaho for her wedding amid threatening weather conditions, photojournalist Alex Martin (Kate Winslet) convinces similarly anxious surgeon Ben Bass (Idris Elba) with an imminent operation he needs to conduct in New York to go in with her to charter a plane that will take them to Denver where they can make a connecting flight. Their friendly pilot Walter (Beau Bridges), however, has a fatal stroke en route and crashes the plane in the high altitude Rockies where Alex’s leg is injured and Ben sustains some cracked ribs. Ben wants to wait it out for rescuers, but Alex is convinced no one knows where they are and they must get off the mountain if they are to save themselves. The trip down the mountain is treacherous, and both Alex and Ben nearly lose their lives on several occasions but use the weeks it takes them to descend to get to know one another falling in love in the process.

Based on the novel by Charles Martin, the screenplay by Chris Weitz and J. Mills Goodloe gives us a fairly detailed picture of the personalities of both our protagonists. Alex is pushy, nosy, and a risk-taker, obviously willing to die attempting to get off that mountain; Ben is cautious, patient, and passive, someone who’d prefer not having to make a life and death decision when the life in question is his own. Together the pair brave a host of perils from a hungry cougar to steeply sloping, rocky precipices, the nasty weather of a January blizzard in the Rockies, a fall through a partially frozen lake, and other natural and man-made booby traps, all marvelously and inventively filmed by director Hany Abu-Assad and his cinematographer Mandy Walker. The slide down the mountainside to almost certain death is thrillingly conveyed, and all of the dangers are made believable and engrossing. The real-life Canadian locations make the cold and frozen conditions uber-real, and the infirmities that the characters are dealing with give an extra weight and seriousness to their dicey predicament. Once love enters the picture, the movie becomes less interesting and far more predictable (his wife is dead; her fiancé (Dermot Mulroney) doesn’t really seem like the love of her life) leading to one of recent cinema’s most shamefully manipulative climactic encounters.

While Beau Bridges has a puckish quality in his very brief appearance as the charter pilot before his untimely demise, the film really is a two-hander, and the movie couldn’t be in better hands than those of Idris Elba and Kate Winslet. The pair mesh well together, first as uneasy travel companions who must ultimately learn to work together to survive and later as lovers whose mutual bond gained on the mountain proves stronger than they ever imagined. Bridges’ Walter also brings along his dog (played by two canines according to the film credits) whose presence adds a touch of leavening and lightness whenever the movie threatens to sag under the weight of its own predictability.

The film has been framed at its theatrical aspect ratio of 2.39:1 and is presented in 2160p resolution using the HEVC codec. Sharpness is outstanding, and every flake of snow in hair or Ben’s beard is remarkably detailed. Color is beautifully modulated from near gray conditions during the frequent blizzards to vibrant colors of sky blue and forest green during sunny days, and skin tones are always realistic and appealing. HDR has been used quite effectively to give the snow a bright (but nicely controlled) shine during sunny scenes while lending darker scenes a solid degree of black level. The movie has been divided into 24 chapters.

Though the liner notes claim a 5.1 mix, the disc is actually encoded with a DTS-HD Master Audio 7.1 audio mix. The surrounds are most impressively used during the crash sequence where every channel gets split atmospheric effects that put the listener right in the middle of the chaos. Later on, the surround channels host Ramin Djawadi’s background score as the wilds otherwise offer a quiet aural grandeur. Dialogue has been expertly recorded and has been placed in the center channel.

The UHD disc contains the audio commentary. This is director Hany Abu-Assad’s first time at the microphone discussing one of his films, and he errs in telling too much to the viewer of what we’re seeing on-screen though he does offer some behind-the-scenes anecdotes on how shots were accomplished while lavishing praise on his cast and crew.

The Blu-ray disc enclosed in the package also contains the commentary and also the following additional supplements:

Mountain Between Them: Shooting in Isolation: the use of Canadian locations with many behind the scenes glimpses of how shots were achieved are described by director Hany Abu-Assad, author Charles Martin, production designer Patrice Vermette, producer Peter Chernin, and actors Kate Winslet and Idris Elba.

The Wilds: Survival Stunts: director Hany Abu-Assad praises his two lead actors for taking on so many of the dangerous stunts demanded of them in trying conditions. Also commenting are stunt coordinator Dan Shea, producer Fred Berger, and actors Idris Elba, Beau Bridges, and Kate Winslet.

Deleted Scenes  (14:15, HD): seven scenes can be watched individually or together and with or without director commentary.

While it doesn’t have the stark terror or somber tone of The Grey, a more gripping and frightening survival story from a few years ago, The Mountain Between Us treads familiar ground to entertaining and engrossing effect. The bonus materials and the superb video and audio quality likewise make this a reasonably safe recommendation. 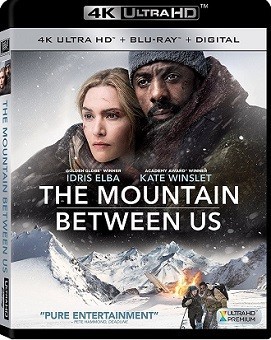