Mother Wore Tights is such an entertaining movie from the Golden Age that even the often lackluster color that’s left for this Twilight Time Blu-ray release can’t spoil its most diverting singing and dancing on display.

Betty Grable reached the zenith of her career as a singer, dancer, and actress in Walter Lang’s Mother Wore Tights. Supported by a delightful song score, a new leading man who was more than an equal to her own talents as a performer, and a period production rich in color and design without being gaudily overdone, Grable was never better, and the film, one of her most popular and one which returned her to the heights as the top ranked female star at the box-office, was not only the best musical film she ever made but also one said to be her own personal favorite.

Despite being the lead in her high school’s senior class play, Myrtle McKinley (Betty Grable) has no intention of going into show business for a living but stumbles into an audition and is hired as a showgirl on the spot. Heading the bill is Frank Burt (Dan Dailey), a talented performer but a stage hog and girl chaser. Working together, however, the two eventually fall in love and marry while rising up the bills at vaudeville houses across the country. Myrtle retires from show business for six years to have their two daughters (Mona Freeman, Connie Marshall) and stay home with them but returns to the act when Frank needs a leading lady placing her daughters in an exclusive finishing school for girls. There, older daughter Iris becomes self-conscious about her parents’ vocation and is ashamed to let any of her friends know anything about what they do to earn a living. Her shame devastates Frank and Myrtle utterly.

Lamar Trotti’s screenplay doesn’t break any new ground especially for a Fox musical with all of its numbers being performance pieces, but the saga of the Burt family as they weather the ups and downs of both show business and Iris’ adolescence is serviceable enough to support a healthy amount of singing and dancing, all of it smoothly helmed by veteran director Walter Lang. Musical performers Grable and Dailey are blessed to have a first-rate song score by Mack Gordon and Josef Myrow which includes tuneful ditties like “This Is My Favorite City” (given a delightful montage rendition showing Frank and Myrtle touring the country with their act), “Kokimo, Indiana” and “There’s Nothing Like a Song” (wonderful new songs that are believable turn-of-the-century novelty numbers), and especially “You Do,” the Oscar-nominated tune which gets three separate renditions in the film, each one more impressive than the last (Frank’s hammy burlesque rendition, Myrtle’s embracing ballad version, and Iris’ loving tribute to her parents (dubbed for Mona Freeman by Imogene Lynn) which won’t leave a dry eye in the house. And there are familiar interpolations, too, like “Burlington Bertie from Bow” (which both Dailey and later Grable parodying Dailey perform) and “Tra-la-la” which Shirley Temple had introduced seven years earlier in Young People.

In Dan Dailey, Betty Grable is paired with her ideal co-star: buoyant and happy-go-lucky to her more settled and steady performer. It’s little wonder they did three more movies together. Both stars sing and dance their hearts out (Dailey is really the first star dancer Grable was linked with who could actually outdance her), and they make the most of both the comic and dramatic possibilities offered in the script. Mona Freeman is spectacularly pretty as Iris even if she is the one saddled with the rather tiresome plot device of causing angst for her parents. Connie Marshall is a pistol as the effervescent younger sibling Mikie (the grown-up Mikie who serves as the film’s narrator is voiced by Anne Baxter), and Sara Allgood offers her own plucky performance as the wise grandmother. And bless Veda Ann Borg’s heart for her memorable gum-smacking showgirl who is Myrtle’s knowing backstage confidante in the film’s first quarter. Fans of the early years of television will recognize familiar acts The Banana Man and Senor Wences (frequent visitors to Captain Kangaroo’s clubhouse) who perform delightfully during the movie.

The film’s original theatrical 1.37:1 aspect ratio is faithfully reproduced here in a 1080p transfer using the AVC codec. With the knowledge that the original vibrant three-strip Technicolor elements are no longer around, the Eastmancolor elements we’re left with are, sad to say, quite variable in quality. Some scenes have decent color and offer reasonably accurate skin tones, but other scenes seem either lackluster in color or overly brownish. The transfer is certainly clean with no age-related anomalies to spoil the presentation, and it’s certainly sharp enough, but the color throughout is a pale reflection of what the film once looked like. The movie has been divided into 24 chapters.

Fox technicians have gotten rid of the low level hiss from the DVD-R release and now present the film’s soundtrack in DTS-HD Master Audio 2.0 mono. While fidelity might not be the most vibrant mono track you’ve ever heard, the dialogue, song lyrics, background music, and sound effects are blended together expertly and make an enjoyable listening experience.

Six-Page Booklet: contains some color stills, original poster art on the back cover, and film historian Mike Finnegan’s appreciative essay on the movie.

Mother Wore Tights is such an entertaining movie from the Golden Age that even the often lackluster color that’s left for this Twilight Time Blu-ray release can’t spoil its most diverting singing and dancing on display. There are only 3,000 copies of this Blu-ray available. Those interested in purchasing it should go to either www.twilighttimemovies.com or www.screenarchives.com to see if product is still in stock. Information about the movie can also be found via Facebook at www.facebook.com/twilighttimemovies.

Betty Grable is so overdue for rediscovery!
R

I certainly agree but these reviews of what Fox did to her legacy are so disheartening. Hough wasn't terribly pleased with the condition of any of them.

Thanks very much for this review. I'm torn. I have the DVD, I like the film and I want to support boutique labels that support old movies; but this disc does not seem to be much of an upgrade. I'll have to think about this but I might stick with my DVD. 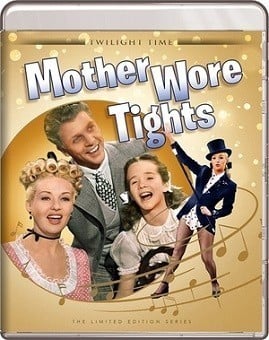