Darren Aronofsky’s mother! may have been one of the most divisive films of 2017, receiving a rare “F” rating from Cinemascore. Picture and sound are great on the 4K UHD Blu-ray release.

I hate to admit it, but I’ve never been much of a fan of Darren Aranofsky’s films. When mother! arrived from Paramount to review, I was very hesitant to watch it, but the next day inserted the disc into my player. Three attempts at watching the film later, I am now prepared to write my review, and it’s going to be short and to the point. What did I just watch? Neil Middlemiss praised the film in his review of the Blu-ray release. I assume we saw the same movie, since Jennifer Lawrence, Javier Bardem, Ed Harris, and Michelle Pfeiffer all appeared in it. But I not only disliked the movie, it got under my skin and quite often had me questioning the actions of many of the characters. Why didn’t Mother (Jennifer Lawrence) call the police when these guests of Him (Javier Bardem) refused to leave? There are many other times I had to ask the same question after events unfolded on-screen. I know the answer, that the film would end or not startle you as the director intended. I understand that Aronofsky wants to make his audience uncomfortable, and he achieves that in spades. This movie just wasn’t my cup of tea.

mother! was filmed primarily in Super 16mm  and cropped theatrically in the 2.40:1 aspect ratio and completed as a 2K digital intermediate (per IMDB). Paramount has upscaled that DI to 2160p and applied HDR using DolbyVision (which appeared as HDR10 on my Sony UBP-X800 player). The additional grain provided by the 16mm film stock has been maintained, giving the film an organic and natural look. Colors have a more natural gradation thanks to the tasteful use of HDR, which also helps provide a more stable contrast with deep blacks and dark shadow detail.

Paramount has upgraded the sound mix to Dolby Atmos (backwards compatible as Dolby TrueHD 7.1), and when played back in Atmos 5.1.2, it is quite immersive and impressive, making you feel as if you are inside that house as sounds pan in all directions – left to right, front to back, and above you. When the guests are making a ruckus upstairs, it sounds like they are upstairs. LFE is strong, particularly during the last 30 minutes or so when the house becomes an all-out war zone.

All of the extras can be found on the included 1080p Blu-ray disc.

mother! – The Downwars Spiral (1080p; 29.51): Aronofsky and his cast and crew discuss the process in making this very strange film.

The Make-up Effects of mother! (1080p; 6:45): Make-up effects supervisor Adrien Morot takes us on a tour of some of the gags his team created for the film.

Digital Copy: An insert contains a code to redeem a digital copy on UltraViolet partner Vudu, which redeemed as HDX, although that may have more to do with the fact that Vudu does not offer this film in UHD at this time.

mother! is a well-made and very strange little film, a bit too allegorical for my taste. Paramount’s UHD release is probably the best way to go for those who are fans of the film. 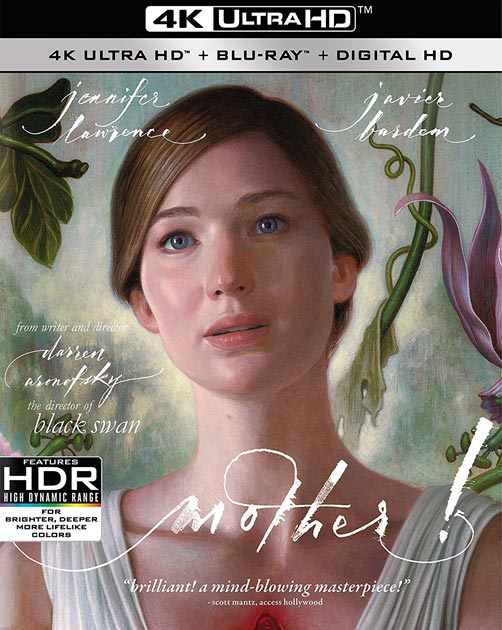