Forum List What's new Dark Style Change width
Log in Register
What's new Search
Menu
Log in
Register
Navigation
Install the app
More options
Dark Style
Close Menu
Posted on June 21, 2019 by Josh Steinberg
You are using an out of date browser. It may not display this or other websites correctly.
You should upgrade or use an alternative browser.
Brando and Brynner topline a notorious flop that’s somewhat better than its reputation. 3.5 Stars

Marlon Brando and Yul Brynner star in Morituri, a film that’s perhaps better remembered for its failure at the box office than its merits as a film. Viewed apart from that history, the film itself is better than its reputation would suggest, but still more of a programmer than a destination in its own right.

In this naval film set in the World War II-era, Marlon Brando stars as Robert Crain, a German living in exile on account of his disapproval of the war and Hitler’s regime. Yul Brynner co-stars as Captain Mueller, leader of a German supply ship who has himself grown disillusioned with the war but maintains a patriotic veneer. In the early moments of the film, Crain is recruited by the Allies (as personified in an all-too-brief appearance by Trevor Howard) to infiltrate Mueller’s ship. That ship is set to depart from Japan to Germany carrying a load of rubber which would be invaluable to either side, and the Allies want Crain to sabotage the ship’s self-destruct capabilities so that the Allies can capture the raw material for their own use. While Crain is hesitant to take on the mission, he’s made an offer he can’t refuse.

Once onboard the ship, Crain discovers a conflict brewing between Mueller and the crew. Mueller, while personally despising Hitler, feels compelled to remain loyal to his mother country. Some of his crew members are quite a bit more fanatical, and have bought into Hitler’s philosophy hook, line and sinker. And still others are political prisoners forced into service by the Nazis and looking for any opening to escape. And when the ship makes contact with a Japanese submarine, the passenger manifest grows to include a young German woman of Jewish descent aware that she’s being sent to her death. In the midst of these conflicting personalities, each with their own sets of goals and allegiances, Crain must complete his mission while trying to enlist as much covert help as he can get along the way.

Daniel Taradash’s script (from Werner Jorg Luddecke’s German novel) has enough pieces of intrigue, but the writing’s pacing and the direction from Bernhard Wicki seem at odds with what the story wants to be. This is a film that seems as if it would work best as a tight, tense thriller with as little fat as possible, but the finished product, at 123 minutes, has a bit of bloat to it. Individual scenes, particular those in which Brando and Brynner verbally spar, have a riveting quality to them, but when those two men step aside, the film tends to meander. But with a fantastic score by Jerry Goldsmith, and some very nice black and white cinematography by Conrad Hall, the film’s slower movements fare better than they should.

Morituri is presented in its original aspect ratio of 1.85:1. The presentation seems to be based on an older transfer, with more frequent occurrences of scratches, speckling and debris than one would expect from a new Twentieth Century Fox transfer. The opening reel in particular seems to exhibit uneven black levels and less than stellar clarity, though both improve somewhat as the film progresses. It’s by no means unwatchable, but is far from reference level.

It’s worth noting that the transfer’s imperfections are much harder to spot on smaller and medium sized displays. While these shortcomings were very clear on a 100” projection screen, they were somewhat minimized when viewed on a 55” monitor. A half-star can be added to the video score for those viewing on smaller displays.

The disc presents two options for the film’s soundtrack, both in the DTS-HD MA lossless format: a 2.0 stereo remix (most likely created by Fox for the film’s DVD release) and the original 1.0 mono mix. While the disc defaults to the 2.0 version, the 1.0 fared slightly better. Both versions have more crackle and hiss than a typical Fox or Twilight Time release, though it should be noted that these imperfections never obscure the clarity of the dialogue. The 1.0 mono mix has better overall fidelity and sounds stronger overall, while the 2.0 stereo mix sounds a little weaker by contrast, and lacks the kind of separation that would make that trade-off worthwhile.

Original Theatrical Trailer (3:17) – The film’s original trailer is not particularly compelling and exhibits a fair amount of debris.

Teaser Trailer (0:25) – This very brief trailer fails to create mystery by saying only that “Morituri must mean something unusual.”  Clearly this was not enough to hook an audience.

Morituri, while by no means a hidden gem, is a better film than its reputation would suggest. Unfortunately, Twentieth Century Fox has seen fit to only provide Twilight Time with an inconsistent and somewhat disappointing transfer that falls short of both parties’ usual high standard. While far from unwatchable, it’s never anywhere near the neighborhood of reference quality. 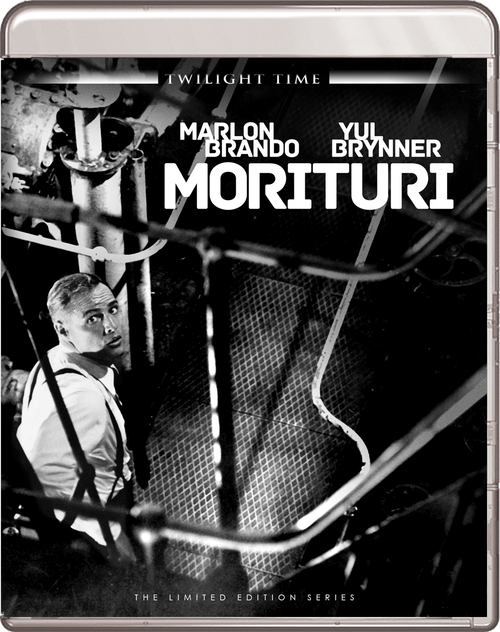