A coming of age story simplistically told and yet filled with complex emotions which are often observed but not conveyed with words, Barry Jenkins’ Moonlight offers a memorable exploration of a character in three distinct stages of his life.

A coming of age story simplistically told and yet filled with complex emotions which are often observed but not conveyed with words, Barry Jenkins’ Moonlight offers a memorable exploration of a character in three distinct stages of his life. Poignant to the point of heartache and containing some superb performances, Moonlight certainly ranks as one of the year’s premiere works of art.

Chiron (Alex Hibbert) is a nine-year old boy who is the constant source of bullying by neighborhood jerks in a tough Miami project. His one friend Kevin (Jaden Piner) takes an interest in trying to toughen up his pal, but it’s actually drug dealing Juan (Mahershala Ali) who provides Chiron with a male authority figure even though Chiron’s crack-addicted mother Paula (Naomie Harris) doesn’t approve. As a teen, Chiron (Ashton Sanders) is constantly under threat of violence by school tough Terrel (Patrick Decile) but finds solace in his growing friendship with Kevin (Jharrel Jerome), a friendship that is cruelly tested and leads to trouble for the seventeen-year old. After serving jail time in Atlanta, Chiron now known as Black (Trevante Rhodes) goes into business for himself but finds himself taken aback with an unexpected phone call from Kevin (André Holland).

Chiron’s sixteen-year journey through a horrific adolescence was first noted in the play In Moonlight Black Boys Look Blue by Tarell Alvin McCraney, and it’s been adapted for the screen by director Barry Jenkins. The three stages of Chiron’s life covered in the play and film don’t go into the everyday depths of the abusive life the character must face on the streets and at home but instead are provided in highlights which help mold Chiron into the character he will ultimately become in the movie’s third act (the first sight of Chiron in this third section is not only astonishing but also chillingly brings his character full circle with his mentor Juan). But certain scenes are unforgettable: Juan’s gentle instructions on swimming to the painfully shy kid, several moments with Juan’s loving girl friend Theresa (Janelle Monáe) who becomes his surrogate mother and her home a safe haven from his real mother’s abuse and neglect, Chiron’s moonlit initiation with sex, and the triumphant retaliation against Terrel which even though it lands him in prison seems warranted and welcome. Director Jenkins takes several opportunities to use a circular camera, most disturbingly when Terrel is surveying his goon squad to choose someone to do his beatdown bidding, and yet Jenkins is confident enough to let faces do the emoting without feeling the necessity for words, and the film’s silences are often as affecting and profound as almost anything else in the movie. Chiron and Kevin’s climactic encounter in Kevin’s diner is fraught with sexual tension and re-discovery, all handled astutely by director Jenkins.

The six actors who play Chiron and Kevin at different ages are all quite wonderful: Alex Hibbert (who gives mostly a silent performance of impressive depth), Ashton Sanders, and Trevante Rhodes as Chiron; Jaden Piner, Jharrel Jerome, and André Holland as Kevin with Rhodes and Holland especially on point as the adult versions of the characters. Mahershala Ali is a strong, oddly noble presence as drug dealer Juan (and how often does one say that about drug dealers depicted in movies?), and Janelle Monáe complements him beautifully as the gentle, understanding Theresa. Naomie Harris has a bravura turn as the crack addict Paula screeching out epithets at her son and eventually owning up to her many mistakes as a mother. Patrick Decile gets down and dirty as the bullying Terrel.

The movie was filmed digitally and is framed here at 2.39:1 with 1080p resolution using the AVC codec. Because of the nature of cinematographer James Laxton’s camerawork which goes in and out of focus during quite a few scenes, it’s sometimes hard to get a handle on the transfer’s sharpness. Some of the segments are also slightly tinted for emotional resonance though usually color is true and skin tones real. Contrast has been consistently rendered, and black levels are very good. The movie has been divided into 16 chapters.

The DTS-HD Master Audio 5.1 sound mix plays with sound in some interesting ways, especially in using Nicholas Britell’s eclectic score (a mix of classical scoring and hip/hop rhythms) either reduced to the center channel or expanded into the full soundstage as necessary. Dialogue has been well recorded and has been placed in the center channel. Ambient effects are also often subdued and occasionally not noticeably channeled for the full surround effect.

Audio Commentary: writer-director Barry Jenkins speaks with authority and energy about the making of his second feature film with no extended pauses.

Poetry Through Collaboration: The Music of Moonlight (10:06, HD): composer Nicholas Britell and director Barry Jenkins discuss their collaboration to attain the musical motifs they wanted to enhance the story.

Cruel Beauty: Filming in Miami (5:39, HD): writers Tarell Alvin McCraney and Barry Jenkins discuss their upbringing in Miami as influencing the tone and texture of the film being shot there. Also commenting on the Miami locations are producers Adele Romanski, Dede Gardner, and Jeremy Kleiner.

A lovely, moving coming-of-age story set amid the rough neighborhoods of Miami, Moonlight doesn’t milk its emotions for their ultimate depths but rather pulls back and lets the viewer read his own thoughts and feelings into the narrative, an unusual and different approach to cinematic storytelling. The Blu-ray offers very good picture and sound quality for one of the year’s best films. 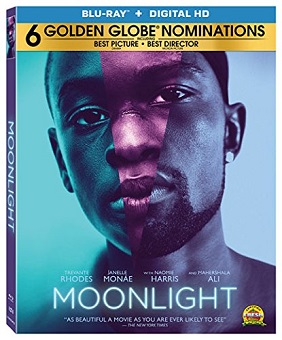