MGM’s 1955’s CinemaScope production of Moonfleet has been released on Blu Ray by Warner Archives.  Directed by the great Fritz Lang, this would be his third from last Hollywood film.  Like many MGM films of the era, this big-budget costume drama was a box office failure that was critically neglected at the time but whose reputation, due mainly to French critics, has grown over the years.   This edition looks great, easily topping any previous releases I’ve seen, including 35mm theatrical showings.

Fritz Lang’s Moonfleet opens on a Dorset road an October night in 1757 with young John Mohune (Jon Whiteley) outside Moonfleet where he is in search of rogue Jeremy Fox (Stewart Granger), the current owner of his once-wealthy family’s estate.  Young Mohune is the last in the line of a powerful family that ruled with an iron fist.

The boy carries on him a letter written by his dying mother to seek out Fox, whom she hopes will befriend (take care of) her orphaned child.  The embittered Fox was the young lover of the boy’s mother until the family had him banished to the colonies, after having him nearly killed and permanently scarred by guard dogs.

After fainting in fright in a churchyard, John is intercepted by a gang of smugglers and brought to their headquarters/saloon/inn.  The smugglers quickly learn that the man the boy is looking for is none other than their ringleader, Jeremy Fox, who makes a dramatic entrance with an exotic dancer and shortly proceeds to kill one of the gang members who has been double-dipping.

Fox’s first impulse is to send the boy off to a boarding school thereby alleviating him of any emotional responsibility and providing the boy with a proper upbringing.  This changes when he witnesses the boy’s intelligence and grit, much to the chagrin of Fox’s mistress Mrs. Minton (Viveca Lindfors) who wants nothing to do with the child.

Mrs. Minton’s act of recalcitrance in front of John provokes Jeremy to send her back to her home on the next ship out of Moonfleet.

The next evening, in the churchyard John accidentally stumbles into the underground tomb of his ancestors.  While investigating he discovers the coffin of ‘Red Beard’ Mohune, the legendary leader of the Mohune clan.  The coffin accidentally gets knocked over and the boy finds a locket around the neck of the skeleton.

John also discovers that this is the hideaway for the gang of smugglers and Fox appears and tells them that they are going to strike the next night.  The boy is again discovered by the smugglers and taken back to the saloon headquarters where Ratsey (Melville Cooper) is able to open the locket and find a sheet of misquoted Bible verses, which in fact is a coded message that gives the location of a hidden giant diamond.

While this is taking place, Fox agrees to go into business robbing ships at sea with Lord and Lady Ashwood (George Sanders and Joan Greenwood).

Fox and John end up on the run after Mrs. Minton betrays Fox to the police.  Fox figures out exactly what the sheet inside the locket is and he and the boy work together to locate the long-lost jewel.

Moonfleet is a strange film, the pieces are greater than the total.  It’s based on an English novel from 1898 (not published in the US until 1951).  It’s Lang’s last big-budget film.  It’s all studio work with the exception of a couple of scenes filmed on the California coast.  I find the film ravishing to look at.  It’s set design by MGM production design chief Cedric Gibbons (too many credits to even begin) and Hans Peters (The Americanization of Emily, Lust for Life, Scaramouche, Battleground, Border Incident) is beautiful.

The costumes by Walter Plunkett (7 Women, Some Came Running, Seven Brides for Seven Brothers, Singin’ in the Rain, Gone with the Wind) are wonderful.  This new transfer shows off the careful color design and costumes textures like I’ve never noticed before.

John Houseman is rarely given his full due as a film producer.  He was one of the rare producers who seem to have been able to work with strong visual directors while getting some of their best work from them.  His credits are remarkable: All Fall Down, Lust for Life, Julius Caesar, The Bad and the Beautiful, On Dangerous Ground, They Live by Night, Letter from an Unknown Woman, and uncredited producer of Citizen Kane.  It’s a shame that he had a falling out with Orson Welles.  It’s clear from their individual credits, that they didn’t need each other, but just imagine what their collaboration would have produced if they had continued working together.

With so much talent involved, this must have looked like a sure thing.  Unfortunately, the movie bombed.  I think the weak link is the script by Jan Lustig (Town Without Pity, Knights of the Round Table, They Were Expendable) and Margaret Fitts (Stars in My Crown, The King and Four Queens, and various television shows); both writers worked on good movies but the script for Moonfleet feels incomplete.  Characters and subplots are undeveloped.  I think the worst aspect of the script is that the major conflict is Jeremy Fox’s internal conflict.  That’s always hard to dramatize.  It’s a shame that with all of the great actors involved there is no clear villain.

I’ve also wondered if the film encountered censor problems?  There’s no question that Stewart Granger is sleeping with every female in the movie.  I like how it’s communicated that he’s having sex with Joan Greenwood.  We see the couple kiss passionately and the next shot of the two has Greenwood putting her earrings back on.  The big question for me is whether Jeremy Fox is John Mohune’s father?  I go back and forth on that.

The two major conflicts of the film are both internal – John Mohune’s confrontation with the adult world.  And it isn’t a pretty world.  All adult characters, both male and female, are morally corrupt with the exception of Alan Napier’s Parson Glennie.  There is no loyalty or compassion in this world.  Nobody in this movie would have a problem doing away with a child if it protected or benefited them.  Like Lang’s next film While the City Sleeps all characters are constantly scheming and undermining trying to outdo others in order to gain power, either financially, sexually, or as a means of control.

The other conflict is that of the character of Jeremy Fox.  The appearance of the boy John Muhone reminds Fox of his innocent youth and love for the boy’s mother – something Fox would like to forget.  These purer ideals were tortured, beaten, and literally bitten out of Fox as he, like John Muhone who is about to, alone made his way in a harsh world.  The viewer is led to believe that the cynical Fox will take advantage of the boy’s youthful faith and abscond with the legendary jewel, leaving the boy to fend for himself.

I was a slow convert to Lang.  When I first started seeing his films, I found them cold.  I liked them but couldn’t understand the adulation.  This changed over time.  Lang isn’t given enough credit for his pioneering work on thrillers.  Dr. Mabuse, The Gambler, Spiders, Spies, and M feel very contemporary in terms of style.  All are groundbreaking and exciting movies.  It also helps if one has a chance to see Lang films projected on a big screen.

Lang is an artist of incredible precision; the more I watch of his work through repeated viewings the more I appreciate this.  I was struck by the exactness of camera setups and editing choices while watching Moofleet this time.  The scene where John sings a song to Fox and his gathered friends is wonderfully subtle in its character revelation with its use of wide shots combined with reaction shots.

Much is made of Lang’s dislike of the Cinemascope frame.  It would be the only time Lang worked in that ratio.  I can imagine the difficulty of having to adapt to such a change after over 35 years of directing.  That said, Lang and Planck block the action and compose the frame expertly.

I can’t think of a Lang film that I out and out dislike.  He’s like Hitchcock in that sense.  There are Lang films that I consider minor, but if I haven’t seen them in a while, I’m always game to rewatch.  You can never tell what you might spot this time around.

The magicians at Warner Archives have done it again; Moonfleet looks spectacular on Blu Ray.  I’ve seen Moonfleet at least 3 times theatrically and owned both the laserdisc and DVD of the film.  Nothing compares to this transfer.  The colors are beautiful.  I believe this transfer to be on the same level as Warners work on Seven Brides for Seven Brothers, Brigadoon, It’s Always Fair Weather, and Love Me or Leave Me – all films that each previous video edition contained brownish, ugly transfers that Warners has gloriously corrected.

Unfortunately, there are no extras other than the original theatrical trailer.  Subtitles are included.

The tone of Moonfleet is somber unlike the exuberant swashbucklers starring Errol Flynn or Tyrone Power.  It clearly wasn’t made exclusively for kids like the Universal costume pictures of the 50s.  It’s not that the movie lacks the energy of previous swashbuckler classics or even the earlier Lang films mentioned above – nobody could accuse any of the artists involved with Moonfleet of phoning it in.  Perhaps the tone is a reflection of something in the air, like Film Noir, in the post-war world?  Moonfleet does contain an excitement of craft.  It is an exquisitely crafted movie.  The big studio swashbuckler genre was coming to an end, though nobody probably knew it at the time.  Moonfleet in some ways feels like the swashbuckler equivalent of an Anthony Mann or Budd Boetticher western.  But instead of the following period of revision the swashbuckler sadly just faded away. 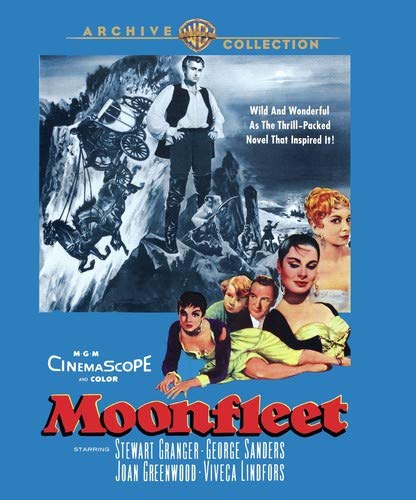