Forum List What's new Dark Style Change width
Log in Register
What's new Search
Menu
Log in
Register
Navigation
Install the app
More options
Dark Style
Close Menu
Posted on March 18, 2017 by Matt Hough
You are using an out of date browser. It may not display this or other websites correctly.
You should upgrade or use an alternative browser.
Small fry comedy adventure doesn't have much for the adults in the family. 3 Stars

Young fans of the Monster High series by Mattel will undoubtedly enjoy the latest installment Electrified even if their parents will likely not find much here to hold their attention.

Mattel has produced another entry in its very popular series of Monster High pre-adolescent animation pictures, this time subtitled Electrified. The usual heroes and villains are around to cause havoc and straighten out the confusions, and as usual the made-for-home video release contains some gentle life lessons for the small fry which make up its primary audience. Apart from a few clever plays on words, there isn’t a lot here for grown-ups, but young girls with a fondness for these ghoulish teens should have a good time.

The kids at Monster High, all children of folklore’s most famous monsters, are looking for their next big project. The Werewolf’s daughter Clawdeen (Celeste Henderson) wants to open a fashionable new salon and spa and wants to create a space where monsters and humans (whom they all call “normies”) can patronize together without fear. But leave it to anti-social Moanica (Cristina Milizia) to not only spurn any attempts to get along with humankind but to look for a way to terrorize the local human community. Getting an idea to steal all of the power from the local power plant knowing that humans are afraid of the dark, she enlists the zomb-boys to help her carry out her nefarious scheme. Frankenstein’s daughter Frankie (Cassandra Morris) had suspected Moanica was up to something and had tapped the Boogey Man’s daughter Twyla (Jonquil Goode) to keep an eye on Moanica’s whereabouts, but she gets captured and Moanica decides to use Twyla as bait to fulfill her mad scheme.

Keith Wagner has written a screenplay which taps into lots of little girl fantasies that feature mod fashions and modern music trends along with the familiar array of ghoulish characters which have been accumulated during the previous Monster High films. A new ghoul joins the group at the beginning of this installment – the Scottish brogued Silvi (Katy Townsend), but she isn’t given much to do in the movie apart from participating in a fairly unrelated though amusing subplot involving a new band being formed by school jock Raythe (Travis Dresden) involving a group of the school’s students who can’t agree on the band’s name or the type of music they’re going to play. All of the familiar characters from previous entries are present and accounted for, and the zomb-boys get much more screen activity this time out and are the movie’s drollest conceit. And directors Avgousta Zourelidi and Jun Falkenstein stage a couple of spectacular sequences, especially a climactic one where a camera pullback reveals the zombies toilet papering the town (yes, causing havoc on the community in this movie is more prankish than murderous) and make sure that the screen is constantly aglow with bright, often fluorescent colors to keep younger attention spans from wandering. There are also some upbeat tunes sung by Ari (also Jonquil Goode) like “You’re Amazing” and “I’m Electric” that will keep the small fry toes tapping.

The voices are all appropriate to the personalities of the characters they’re portraying. Cristina Milizia’s Moanica is suitably arch and threatening, Debi Derryberry sounds just as you expect the child of Dracula to sound (if Dracula is Bela Lugosi), Celeste Henderson does a fine job with both Clawdeen (a Bronx-tinged lilt) and Cleo (more soulful and kittenish), and Cassandra Morris is an upbeat, jovial Frankie. Jonquil Goode also does an excellent job doubling with the shadowy Twyla and the singing Ari.

The made-for-home video release is expectedly framed at 1.78:1 and is offered in 1080p resolution using the AVC codec. Even though the artwork is low budget CG renderings (looking much like the in between stage of expensive feature film animation), sharpness is outstanding throughout with details which can be seen such as they are in the hair designs, clothes, and complexions (especially Moanica’s facial veins) of the characters. Colors pop right off the screen and are always under control except in scenes where after being electrified, they’re meant to glow and bloom. Contrast is consistently applied to the imagery, and black levels are pitch black and effective. There is no banding to be seen in the transfer. The film has been divided into 12 chapters.

The DTS-HD Master Audio 5.1 is often fairly rudimentary in its design, but there are certain moments (as in the jam session that ends in chaos as the band argues among themselves about the name and the music to be played) where creative use of the surround channels is employed with directionalized dialogue, and split atmospheric music effects are present and most effective. Otherwise, the dialogue is always recorded professionally and is always easy to understand. Daniel James’ background score and songs get nice filtering through the fronts and rears.

Ever After High: Epic Winter (23:38, HD): the “Snow Day” episode from the popular Netflix children’s series is presented.

Young fans of the Monster High series by Mattel will undoubtedly enjoy the latest installment Electrified even if their parents will likely not find much here to hold their attention. Superb picture and sound make this package a decent investment. 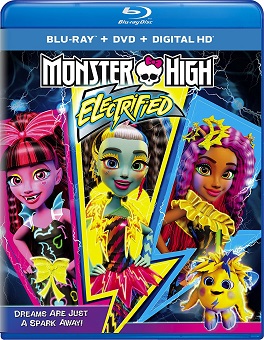