Forum List What's new Dark Style Change width
Log in Register
What's new Search
Menu
Log in
Register
Navigation
Install the app
More options
Dark Style
Close Menu
Posted on December 20, 2021 by Todd Erwin
You are using an out of date browser. It may not display this or other websites correctly.
You should upgrade or use an alternative browser.

Monoprice is a company known for its value-priced cables and accessories, and over the past decade has begun branching out to include hardware. I reviewed the company’s Model 10565 Premium 5.1-Ch. Home Theater System with Subwoofer back in January 2014, and for the price they were comparable in audio quality to entry-level speaker sets by Yamaha or Boston Acoustics.  When I moved to rural Nevada in 2017, I had set up two home theater systems in the house, one in the living room and one in my home office (where I conduct many of my movie reviews for this site). The living room consists of an LG 65UF8500 display, a Denon AVR-X2400H 7.2 receiver, Polk TSi100 bookshelf and CS10 speakers in the front, an OSD PS10 10” subwoofer, and four Polk TL2 satellite speakers for surrounds, all running in a 7.1 configuration. In my office, I have an LG 55” C1 OLED, Denon AVR-S930H 7.2 receiver, Energy CB10 bookshelf and CC5 center speakers and a pair of Onkyo SKH410 Dolby Atmos-enabled upfiring speakers in the front, a Polk PSW111 subwoofer, and a pair of Energy CB5 bookshelf speakers for surrounds, running in a 5.1.2 configuration. I’ve been itching to try out some new speakers (it’s a good 2 hours drive to the closest brick and mortar retailer), so when the opportunity arose to review Monoprice’s new Encore series of home theater speakers, I was extremely eager to give them a try.

I’ll say one thing up front – Monoprice does an excellent job of packing their speakers. These were shipped via Fed Ex Ground to my home, and I think I am the least-liked customer on my driver’s route with my large orders of 20 pound bags of both dry cat food and cat litter (often in the same box, sometimes weighing 60 pounds total) and now two towers, two bookshelf speakers, and one center speaker each in their own box to be delivered. Well, one of the towers arrived with one side of the box scraped open, but the foam padding that Monoprice uses, in addition to the cloth bag, protected the speaker extremely well, with only a minor blemish in the black wood grain on the one side where the box had been torn open. Since the bookshelf speakers were fairly large and had no mounting brackets or hardware, I decided to swap out the front Energy CB10 bookshelves in my office with the Monoprice Encore B6 bookshelves, and install the Encore T6 Tower and C6 Center in the living room. 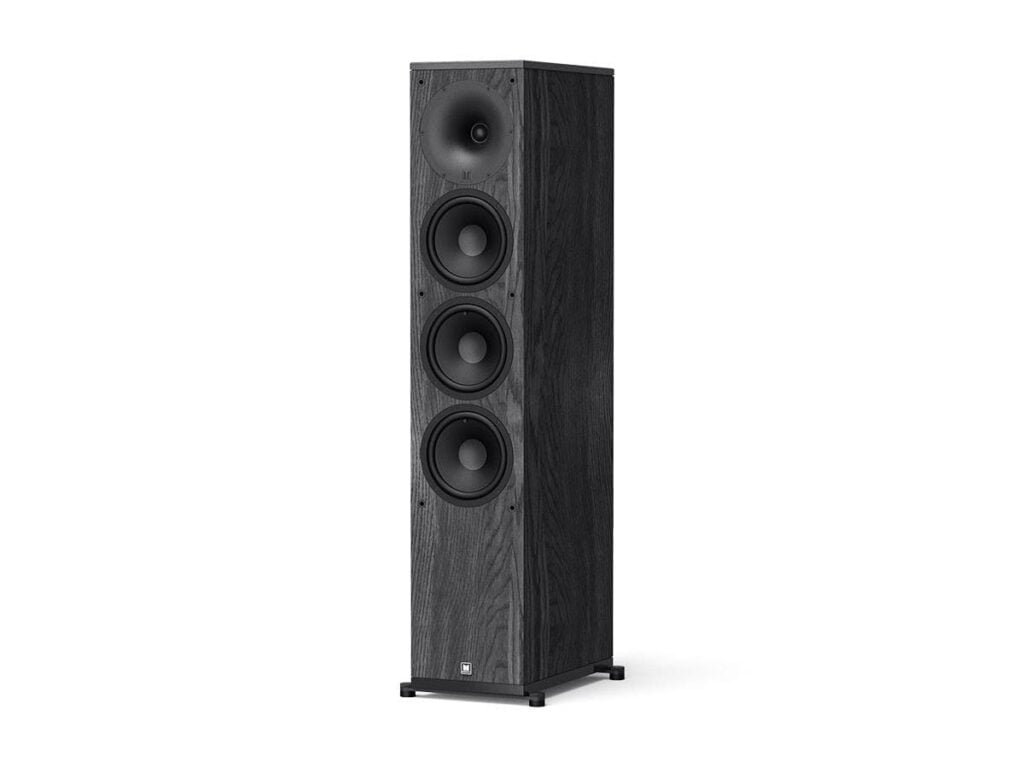 The Encore T6 Towers are relatively large, measuring 40” high, 7.9” wide, and 13.8” deep and weigh just under 50 pounds. Each tower speaker consists of two 6.5” Long Fiber Pulp Cone woofers with NBR surrounds, one 6.5” Long Fiber Pulp Cone mid-woofer with an NBR surround, and one 25mm Silk Dome tweeter with Waveguide, all housed in a vented MDF cabinet with horizontal shelf bracing and a black piano finish on top with two sets of 5-way binding posts (for the option of bi-wiring) on the rear. The tower speakers are rated at 4 ohms with a sensitivity of 87.8db ([email protected]) and a frequency response of 37Hz ~ 20kHz. The feet were simple to install, are rather sturdy, and raised them off the shag carpet while providing excellent stability.

The Encore C6 Center was a bit of a challenge considering its dimensions, which are 22.2” wide, 7.9” high, and 9.9” deep and weight of 22 pounds. Inside are two 6.5” Long Fiber Pulp Cone woofers with NBR surrounds and one 25mm Silk Dome tweeter with Waveguide, all housed inside a vented MDF cabinet with horizontal shelf bracing with a set of 5-way binding posts on the rear. The center speaker is rated at 4 ohms with a sensitivity of 87.7db ([email protected]) and a frequency response of 56Hz ~ 20kHz. It was the height that was the main issue, about two inches too tall to be placed on the middle shelf of my entertainment center which is where my current Polk center was located. I ended up placing the C6 center on two short speaker stands in front of the entertainment center for purposes of this review. I then ran the Audyssey speaker calibration and room correction program built in to my Denon receiver, which detected the towers and center as Large and set the crossovers at 40Hz. Using my Radio Shack SPL meter, I tweaked the speaker levels once the calibration was complete.

I started off with an episode of Hawkeye in Dolby Atmos from Disney+. The first thing I noticed was that dialogue was much cleaner and clearer, but also directional cues from the left and right were more discrete and bass response was more evident. This continued with The Mitchells vs the Machines in DTS-HD MA 5.1 on Blu-ray, with a wider front soundstage that I was able to perceive before. Thinking it was just content that I was not familiar with, I later played portions of Apocalypse Now and Raiders of the Lost Ark in Dolby Atmos from 4K UHD Blu-ray, and there were subtle sounds I had never heard before, with the speakers able to reproduce sounds with more clarity than I was used to. Satisfied with movies, it was time to move on to music. I started with three DVD-Audio titles – The Beatles: Love, Blue Man Group: The Complex, and my standby, Toy Matinee. I listened to portions of these in both 5.1 surround and stereo, and it was the stereo mixes that really impressed me more, as the towers were able to reproduce a clear and distinguishable phantom center in addition to a wide front stage and tremendous low-end. 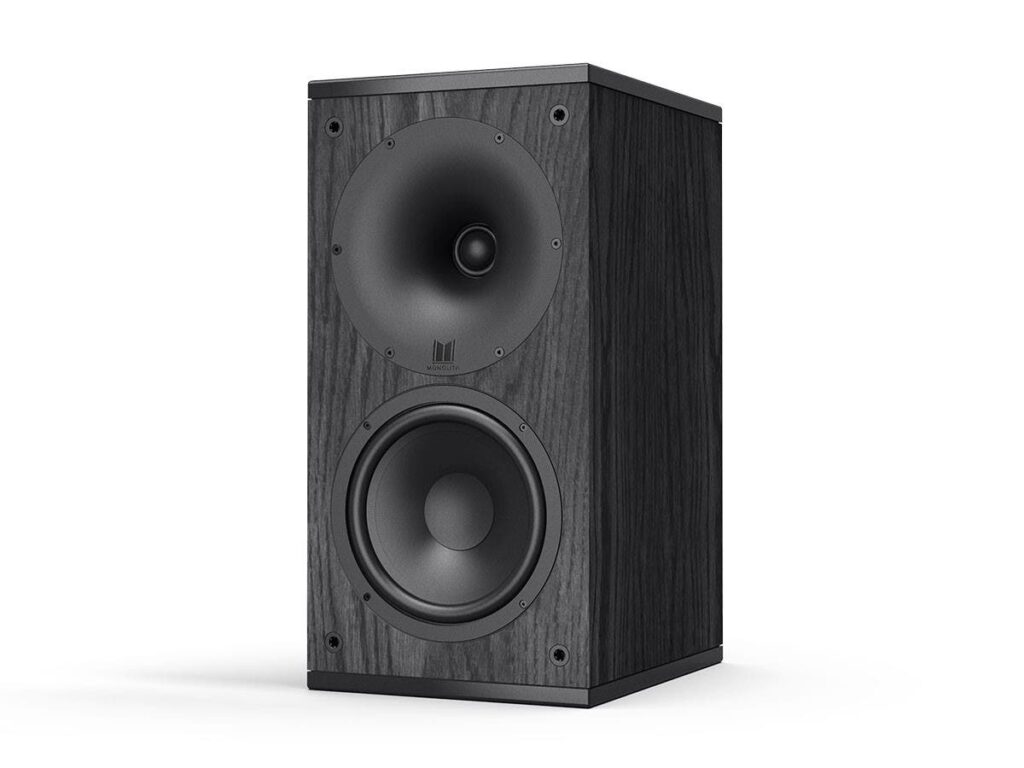 Moving on to the B6 Bookshelves, these are also rather hefty, measuring 15.7” high, 7.9” wide, and 9.9” deep and weigh 15.4 pounds each. The B6 consists of one 6.5” Long Fiber Pulp Cone woofer with NBR surround and one 25mm Silk Dome tweeter with Waveguide, all housed inside a vented MDF cabinet with horizontal shelf bracing. They are rated at 4 ohms with a sensitivity of 85.0db ([email protected]) and a frequency response of 49Hz ~ 20kHz. I ran the same Audyssey calibration testing in my office, which detected the bookshelf speakers as Small with crossover at 80Hz, then adjusted the speaker levels using my SPL meter. I threw the same demo material at the Encore B6 bookshelves, and had similar results, although I did find them to have a less bass response than the Encore T6 towers, but that is to be expected. My only real complaint with the Encore B6 bookshelves is their lack of any mounting bracket or hardware, something many may want when using these as surround speakers.

The Monoprice Monolith Encore series are a good value. Overall, I was very impressed with the sound quality for speakers at this price point. The T6 towers sell on the Monoprice website for $399.99 each, with a $20 price break per unit when purchasing two or more ($379.99 each). The C6 center speaker is $249.99, and the B6 bookshelf is $179.99 for one, $169.99 each when purchasing two or more. Monoprice even offers free shipping. Comparable major brand speakers will likely run you almost twice as much if not more.

Thanks for this. These are very interesting speakers for sure. They are on my list to check out as I build a new system.
You must log in or register to reply here.