Martín Rosete’s Money is one of those films that insists it’s smarter than its audience, the kind of film that makes one irritated at its pretensions, disgusted with its characters, and frustrated at its narrative incompetence.

Martín Rosete’s Money is one of those films that insists it’s smarter than its audience, the kind of film that makes one irritated at its pretensions, disgusted with its characters, and frustrated at its narrative incompetence. Excellent actors have been wasted servicing a script not worthy of them but which gives them lots of dialogue and the appearance of performing in a clever con movie which is actually anything but.

Two pharmaceutical representatives Mark (Kellan Lutz) and Sean (Jesse Williams) have sold insider company secrets to a rival firm for $5 million. As the two split their loot under the pretext of having an intimate patio supper with their better halves, Mark’s wife Sylvia (Jess Weixler) and Sean’s girl friend Christina (Lucía Guerrero), they’re visited by a new neighbor John (Jamie Bamber) who surprises the quartet by drawing a gun on the group and demanding the payoff money, all $5 million of it. The women have no knowledge of what the men have done, and the men plead ignorance until John takes a knife and slices off one of Sean’s fingers proving that he means business. The evening passes as each one of the group tries his or her best to gain the upper hand in the negotiations for their lives and the money.

Josep Ciutat has attempted to pen a scenario that is oh so literate and cunning, but he’s invented five completely unappealing characters, made one of them a total omniscient who knows every possible fact about each one of the others (which makes the supposedly surprise ending a bogus one since there is no possible way one particular character is going to get away with the scheme which has been pulled off), and plotted the narrative in ways that simply don’t reflect real human beings, especially a foursome who are supposedly college graduates (a couple of them from Ivy League schools) but who can’t read between the lines of their situation and understand their only possible options and instead let themselves be played like violins by their attacker. Director Martín Rosete has mounds and mounds of talk between the five principals to maneuver, and to his credit, he keeps the camera moving well enough to keep the palaver from becoming stale (there are quite a lot of cynical putdowns in the script, especially for the character of Sean, and trying to keep any rooting interest going for any of the victims is an obstacle that neither writer Ciutat nor director Rosete ever manage to overcome). There is an underwater sequence that isn’t staged or shot well, and the sequence before John makes his escape (which happens off camera so the ending will be a surprise) couldn’t really have been pulled off given the setting and characters in attendance.

Jamie Bamber is Mr. Enigma aka John, the charming British stranger who seems to have all the answers and who is either a professional thief out for his own gain or was hired by the firm who paid out the $5 million to get it back (the scenarist didn’t feel it necessary to reveal his true identity to us). He’s slick and always in control, a maddening kind of superhuman character who makes James Bond look like an amateur. Jesse Williams plays Sean as the unbalanced jerk of the foursome; with four unlikable characters, he easily qualifies as the one we’d least care about being offed. Kellan Lutz’s Mark seems cooler under pressure, but he’s all surface calm with nothing underneath of substance, and as the movie runs, we come to see what a toadying loser he really is. Jess Weixler as Sylvia, the character who allegedly never lies, actually has a few aces up her sleeve and is probably the least unlikable of the four victims. Lucía Guerrero shows more street smarts as Christina though she’s petty, too, breaking one of Sylvia’s collectables out of spite and taking money for herself when given the opportunity (though why John permits this is another unexplained facet of the frustrating screenplay). Fredric Lehne shuffles along in a couple of scenes as the family gardener.

The film’s 2.39:1 theatrical aspect ratio is faithfully delivered in a standard definition transfer that’s been anamorphically enhanced for widescreen televisions. Sharpness is very good for a DVD with details in hair and facial features that aren’t lost in close-ups. Color is well saturated and nicely controlled, too, with believable and appealing skin tones. Black levels are good but not exemplary. There’s just a bit of moiré to be seen. The movie has been divided into 28 chapters.

The Dolby Digital 5.1 sound mix seems more front soundstage-based for a good portion of the movie. Alfonso Agular’s background score doesn’t seem to spread out to the entire soundfield until later in the film. Atmospheric effects are used sparingly in the rears. The dialogue-heavy script has been well recorded with the dialogue placed in the center channel.

Money: Behind the Scenes (11:18): the EPK featurette for the movie offers director Martín Rosete, writer Josep Ciutat, and producer Atit Shah the chance to discuss the two years it took to get production underway. Actors Jess Weixler, Kellan Lutz, Jamie Bamber, Jesse Williams, and Lucía Guerrero and film editor Alex Lora all praise the script and talk about the busy sixteen-day shooting schedule to get the movie in the camera.

Money might have been a more palatable enterprise with better written and developed characters and a narrative that doesn’t insult its audience with impossible resolutions. Even on standard definition DVD, the movie looks and sounds good, so fans of the stars might want to give it a rental just for curiosity’s sake. 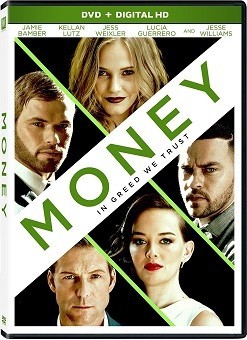