A quasi-thriller that’s too much talk for its own good, William Monahan’s Mojave had the makings of a fine suspense picture. Despite characters who don’t always ring true and direction that veers from inventive to prosaic, Mojave still offers a modicum of interest in its cat-and-mouse struggle scenario.

A quasi-thriller that’s too much talk for its own good, William Monahan’s Mojave had the makings of a fine suspense picture. Despite characters who don’t always ring true and direction that veers from inventive to prosaic, Mojave still offers a modicum of interest in its cat-and-mouse struggle between two wily antagonists (there’s really no one to like in this movie), but in the could have-should have-would have world of the perfect entertainment, this film comes up short.

Jaded, restless movie star Tom (Garrett Hedlund) leaves his dissatisfactions behind in Los Angeles and heads out to the Mojave Desert where he comes upon dangerous sociopath Jack (Oscar Isaac). There’s an unsteady rapport between the two men despite their mistrust as it’s clear they have the same temperament and artistic ambitions, only Tom made it in Hollywood and Jack didn’t. But Jack is a serial killer and though Tom gets the jump on him and manages to escape, Tom accidentally kills a patrolman in the desert and leaves evidence behind to implicate Jack. Wily as he is, Jack manages to turn the tables on Tom’s plan and also makes it back to Los Angeles where he begins stalking Tom and setting him up to take a fall for the death of Tom’s movie producing partner Norman (Mark Wahlberg).

Writer-director William Monahan has done a fair job of setting up and deflating the various traps the men concoct for each other in his erratic screenplay, but there is far too much dramatic license applied in making Jack almost clairvoyant in his abilities to outsmart Tom knowing hiding places and spots where he and his French mistress Milly (Louise Bourgoin) would visit. He also makes these two men far too intellectual and philosophical for the characters they’re playing (listening to the director talk in the bonus material certainly makes it clear where the ideas the two men espouse have come from and late in the film there’s an interrogation by the police that’s ludicrously metaphysical) and doesn’t allow that with all of the killing and shady behavior the two engage in during the movie, there wouldn’t be some witnesses to report the unusual goings-on in one of the country’s most populated cities and involving one of its most famous celebrities. On the other hand, director Monahan makes some excellent choices with camera placement maximizing tension in a scene where we slowly are allowed to see the creepy Jack approaching Tom from behind as he’s reposing only to have the camera dip down again so we can’t know what Jack is up to. More scenes like that along with some excellent surprises in the desert scenes could have gone a long way in ratcheting the anxiety level in the movie to more consistent proportions. To its credit, for a film featuring a serial killer and several murders, gory violence has been held to a minimum.

Garrett Hedlund’s scuzzy, spoiled star never gains our sympathy with his $10 million a year earnings fashioning a comfortable lifestyle where everything and everyone is taken for granted and nothing is appreciated, even life (one begins to wonder why he even cares to save himself since he seems so disenchanted with the world he’s built for himself). Oscar Isaac is the more fascinating of the duo, a maniacal killer without a conscience who can spout Shakespeare and Shaw (sometimes inaccurately) at the drop of a hat and who makes his latest kill a sport for his enjoyment and an intellectual exercise that can prove his worth as an artist. The other Hollywood types portrayed in the movie: Mark Wahlberg’s blowhard producer flanked by prostitutes, Walton Goggins’ stoned, indifferent agent, and Louise Bourgoin’s bored mistress don’t paint a very rosy picture of Tinsel Town.

The film’s aspect ratio of 2.40:1 is faithfully rendered in this 1080p transfer using the AVC codec. Sharpness is only above average in the transfer with a lack of details in close-ups compared to other, better transfers. Color is acceptably realistic with decent skin tones, but black levels are not at optimum levels either. Contrast is very often milky giving an almost dreamlike look to a story that’s anything but a dream. The movie has been divided into 16 chapters.

The DTS-HD Master Audio 5.1 sound mix is a professional job if not outstanding in any way. Dialogue has been well recorded and has been placed in the center channel. Andrew Hewitt’s background music is more interesting than the film it enhances and gets a nice spread through the fronts and rears while atmospheric effects are solid and believable but used sparingly.

A Doppelganger and the Desert: Making Mojave (8:55, HD): in this behind-the-scenes featurette, writer-director William Monahan and stars Garrett Hedlund, Oscar Isaac, and Louise Bourgoin comment on the story and their roles in the movie.

Deleted Scenes (16:40, HD): twelve scenes cut from the film may be viewed separately or in montage.

A somewhat frustrating thriller that never quite twists the audience into the knots which it might have concocted, Mojave offers a laundry list of missed opportunities. Fans of cat-and-mouse suspense films might find a rental appropriate, but the movie may wind up disappointing even those with lowered expectations. 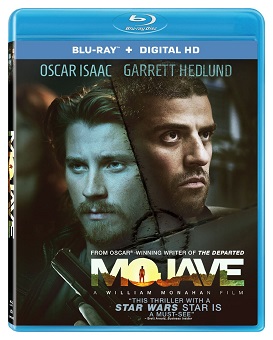