Modern Family’s ninth season finds the series on a downward trajectory  having pretty much squeezed out every bit of inspired comedy from its wonderful characters and their conflicted if loving relationships.

It happens to all television programs that manage to run for almost a decade: characters begin inching toward caricature, plots become predictable and formulaic, actors begin phoning it in. Modern Family has been inching toward mediocrity for the last couple of seasons, but season nine is the first one where the dud episodes outnumber the memorable ones. The children of the original cast have grown into young adults now and are less interesting than before (though they have been given a greater portion of the episodes to carry), and the younger cast members haven’t picked up their slack. And the core adult cast, still professional to the nth degree, can’t plumb the depths of their characters any more than they already have, especially with writing that doesn’t often supersede the mundane.

A few monumental events in the lives of the Pritchetts and Dunpheys occur during the ninth season: Cam (Eric Stonestreet) and Mitchell (Jesse Tyler Ferguson) burn their kitchen down and must endure renovations for the first quarter of the season, all the while barked at by Cam’s assertive sister Pam (Dana Powell) living upstairs. Phil (Ty Burrell) is now a freelance realtor as well as opening a magic shop in a local strip mall while wife Claire (Julie Bowen) is now mostly running the Pritchett closet empire while dad Jay (Ed O’Neill) putters around the golf course and into the lives of his kids and grandkids . Manny (Rico Rodriguez) begins college as a drama major and the brainy Alex (Ariel Winter) returns to Cal-Tech working on robotics. Ditzy Haley (Sarah Hyland) begins her umpteenth career, this time as an assistant to brainless B-movie actress Nicole Page (Mira Sorvino) who has begun a lifestyle brand. On the love life front, Alex begins dating a simple firefighter (Jimmy Tatro) while Haley embarks on a romance with nuclear scientist/professor Arvin Fennerman (Chris Geere), in both cases opposites attracting.

As usual, the holiday and celebration episodes provide the season’s highlights. The season premiere involves the family renting a houseboat on which to observe the recent solar eclipse as all the family have various slapstick adventures leading up to the big moment. Halloween, Thanksgiving, and Valentine’s Day each get special episodes as do Jay and Gloria’s (Sofia Vergara) 10th anniversary and April Fool’s Day/Claire and Phil’s anniversary, the latter of which “Daddy Issues” provides the season’s best episode with three outstanding stories: Cam and Mitch struggling with daughter Lily’s (Aubrey Anderson-Emmons) entrance into puberty, Jay falling victim to a hilarious practical joke, and Claire and Phil trying to outdo each other for anniversary gifts leading to a slapstick climax that comes out of nowhere and is appropriately daffy for this competitive couple.

As in previous seasons, the cast mines their physical comedy gifts to perfection even when the visual humor is uninspired. Newest cast member Jeremy Maguire as five-year old Joe Pritchett is given much more to do this season as the tyke gets a crush on Claire and lets secrets out of the bag at inopportune moments. The show doubled down on guest stars this year. In addition to return visits from previous recurring characters played by Nathan Lane, Shelley Long, Nathan Fillion, Fred Willard, Dana Powell, Adam Devine, and Chazz Palminteri, other guest stars in addition to those previously named have included Kate Burton, Billy Crystal, George Brett, Terry Bradshaw, Chris Martin, James van der Beek, Vanessa Williams, Mary Louise Wilson, Lawrence Pressman, and Jane Krakowski.

Here are the twenty-two episodes contained on three DVDs in the season nine set:

15 – Spanks for the Memories

The transfers retain the widescreen television aspect ratio of 1.78:1 from network broadcasts, and they are anamorphically enhanced for widescreen televisions. The episode transfers offer surprisingly superb sharpness for standard definition and color that is solid and consistently maintained. Contrast is likewise continuously well applied resulting in better than decent transfers nearly matching the 720p quality of the broadcast material especially if viewed on a good upscaling player. I noticed moiré in the Fox logos at the start of each disc but very little in any of the individual episodes. Each episode is divided into 5 chapters.

The Dolby Digital 5.1 sound mix mirrors the broadcast quality of the program. It offers a solid encode for the show’s most important element: dialogue. It’s placed firmly in the center channel and has been expertly recorded. Occasionally, there are some fleeting uses of the fronts and rears for ambient sounds but nothing else of note. Apart from the main title music, a background score is not really present in the series unless the characters enter a location which has piped-in music.

Gag Reel (6:36): funnier this season than some of the episodes.

Modern Family’s ninth season finds the series on a downward trajectory. Though the show has a renewal for one more season, the producers should really be ready to call it a day at the end of season ten having pretty much squeezed out every bit of inspired comedy from its wonderful characters and their conflicted if loving relationships. 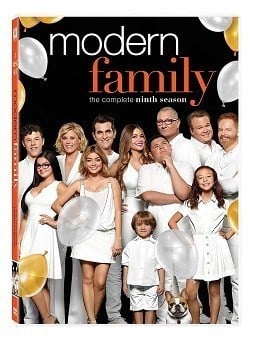