Posted on December 5, 2016 by Matt Hough
Atmospheric telling of a literary masterpiece 4 Stars

John Huston’s 1956 adaptation of Herman Melville’s Moby Dick does quite a remarkable job retaining both the story and the essence of the book without being slavish to its meanderings and philosophizing.

Adapting literary classics for the screen can be a mine field for filmmakers. How much of the book can you feasibly present in the limited amount of time of a typical movie? How much of the plot, if any, do you change or cut? How many characters do you include and who, if anyone, gets left out? John Huston’s 1956 adaptation of Herman Melville’s Moby Dick does quite a remarkable job retaining both the story and the essence of the book without being slavish to its meanderings and philosophizing. Controversial in its day but much more highly regarded now, Moby Dick plays quite beautifully as a faithful and engrossing version of a difficult piece of fiction.

Young merchant marine Ishmael (Richard Basehart) is eager to try his hand at whaling. Signing on to a three-year voyage out of New Bedford in 1841, Ishmael and bunkmate/best friend Queequeg (Friedrich Ledebur) find themselves on the Pequod under the command of the maniacal Captain Ahab (Gregory Peck). Ahab had lost his leg to the legendary white whale Moby Dick, and he’s vowed to avenge his loss on the whale if it’s his last act on Earth. The men under his command set sail not realizing their whaling expedition is really a blind to Ahab’s true purpose: to locate and bring down the white monster of the deep.

Ray Bradbury is credited with the screenplay adaptation of Herman Melville’s fiction masterpiece (with John Huston taking a co-screenwriter credit), and the script and John Huston’s engaging direction manage to carry us back to 19th century seaport life from the very beginning with the dedicated sailors taking a proprietary hold on their vocation and with the site for their work, the seas around New Bedford, drinking and singing and dancing to share their common vocation amid the brotherhood of sea-faring risk takers (the director takes special pains to focus on faces during these early scenes, interesting countenances of the men and their womenfolk who make up this solid community). Huston captures magnificently the flavor of the endeavor, even with the movie’s unquestionable mix of actual sea filming, studio tank work, and interior soundstage shots which are edited with surety together to fashion a whole (only some clumsy process photography late in the film gives the game away). Melville’s sometimes endless segues into the whaling life and the process of extracting all of the various goods from the harpooned creatures gets their due in the film without the processes ever seeming tedious or tacked-on, all the while focusing, of course, on the ever-continuously growing mania of Ahab toward his ultimate goal: a no-holds-barred final encounter with his nemesis. Though bright-eyed, fresh-faced whaler Ishmael is the audience surrogate in this adventure, we lose him for a chunk of time in the middle when other parts of the plot push him into the background. Nevertheless, Huston’s first whale harpooning sequence, a later sequence when an entire army of whales is targeted, and the final fifteen minute meeting of the enemies in their fatal (for most of the cast) final face-off all are tremendously involving and give the movie an unforgettable amount of depth and character.

The film’s two most important roles are a bit problematically cast. Though Gregory Peck received brickbats in 1956 for his performance, he’s not actually bad in the role. He sometimes lacks a bit of dynamism in odd moments though for the most part, he clearly delineates Ahab’s movement from mania to madness quite effectively, and the contrast of his demented, single-minded vengeful captain is quite effective when we see another of Moby Dick’s victims, Captain Boomer played jauntily by James Robertson Justice, meet and match sea stories with Ahab. Richard Basehart seems a bit long-in-the-tooth for Ishmael (the actor was forty at the time, about twenty years too old for the part). He’s likable enough, but imagine how much more effective one of Hollywood’s young guns at the time, Jeffrey Hunter or Paul Newman, might have been in the role. Friedrich Ledebur makes for a wonderfully ingratiating Queequeg. Leo Genn is a strong Starbuck, Ahab’s second-in-command, and Harry Andrews couldn’t be more engaging as second mate Stubb. Among other famous faces on board are Bernard Miles as the Manxman, Noel Purcell as the carpenter, and Francis De Wolff as another of Moby Dick’s victims, Captain Gardiner who had lost his son to the beast. Royal Dano has an effectively creepy early moment on shore as Elijah, and Orson Welles is unforgettable as Father Mapple who sends the sailors off with a thoughtful sermon about God’s purposes and His ultimate hold on their fates.

The film is framed for this release at 1.66:1 and is presented in 1080p resolution using the AVC codec. Color timed to resemble 19th century engravings of whaling ships and sailors, the film’s unique look has been recaptured by colorist supreme Greg Kimble in as close to John Huston’s original intentions as it was possible to achieve with a limited budget. Sharpness is quite excellent (enough to see the spirit gum attaching Orson Welles’ beard to his face and some of the make-up seams on Gregory Peck’s scars), and one adjusts to the desaturated color palette fairly quickly. Black levels are first-rate with excellent shadow detail. There is a bit of vertical striping on the right side of the frame at one point midway through the movie, and one scratch almost dead center which hasn’t been removed, but otherwise the transfer is artifact-free. The movie has been divided into 24 chapters.

The DTS-HD Master Audio 2.0 mono sound mix is very typical of its era. Dialogue has been recorded professionally and has been combined with Philip Stainton’s background music along with some sailor ditties of the period and the atmospheric effects pertinent to life on the high seas. No age-related problems with hiss, crackle, or thumps are of any concern here.

Audio Commentary: film historians Julie Kirgo, Paul Seydor, and Nick Redman carry on a lively discussion (and sometimes debate) about the merits, themes, and problems of the novel and the film making for must-listening.

A Bleached Whale: Recreating the Unique Color of Moby Dick (5:41, HD): colorist Greg Kimble discusses the eight months of work which went into recapturing John Huston’s intended look for the movie which had been lost on previous home video representations of the movie. Before and after shots and split screen shots show the differences in the color timing.

Posters, Lobby Cards & Production Stills: a step-through gallery of promotional items for the movie and earlier film incarnations of the tale.

Six-Page Booklet: contains some stills, some poster art on the back cover, and film historian Julie Kirgo’s enthusiastic appraisal of the movie.

While not the greatest of John Huston’s novel adaptations (The Maltese Falcon would be that), Moby Dick is a worthy effort offering much of the story and atmosphere that had made the novel one of American literature’s most celebrated masterworks. There are only 3,000 copies of this Blu-ray available. Those interested in purchasing it should go to either www.twilighttimemovies.com or www.screenarchives.com to see if product is still in stock. Information about the movie can also be found via Facebook at www.facebook.com/twilighttimemovies. 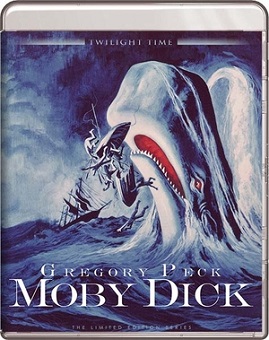