Mister Scoutmaster doesn’t reach the heights of hilarity or satire that it might have attained with better writing and crisper direction. Still, it’s a pleasantly sentimental hour and a half with one of the Hollywood Golden Age’s most eccentric personalities.

After the surprise success of Sitting Pretty which earned its star Clifton Webb an Oscar nomination and entry into the box-office top ten, Twentieth Century Fox struggled to find similar vehicles for their caustic star that might bring in similar audiences that had enjoyed the superior intellect and tart tongue of his iconic character Lynn Belvedere. There were two more Belvedere pictures, of course, but there was also Henry Levin’s Mister Scoutmaster, a comic romp for the star and a handful of pint-sized scene stealers.

Robert Jordon (Clifton Webb) is an intellectual writer who is currently producing a weekly afternoon children’s informational television program called Spectrum. But despite its appeal to grown-ups, kids aren’t watching it at all, a dilemma which the childless Jordan admits he’s going to have to study to find out what might appeal to the youth of the day or risk losing the program and, thus, his livelihood. Kindly, scheming local minister Dr. Stone (Edmund Gwenn) suggests that Jordan volunteer one night a week to be a scoutmaster for the church sponsored Boy Scout troop being a bit reluctant to admit that the rambunctious boys have driven away all of their previous scoutmasters. The boys at first are as recalcitrant with him as they had been with their previous leaders, but Jordan’s quick wits and feisty spirit eventually win them over. One particular problem, however, persists. Mysterious eight-year old Cub Scout Mike Mitchell (George “Foghorn” Winslow) keeps popping up at meetings and camp outs, lying through his teeth about his wealthy parents and his luxurious lifestyle, but Jordan’s wife Helen (Frances Dee) isn’t fooled: she knows a lonely, heart-broken little boy when she sees one.

Leonard Praskins and Barney Slater have based their screenplay on a book by Rice E. Cochran. With a startling dearth of real wit and more slapstick on hand in the film’s first half, the second half devolves into more sentimental territory as a lonely little boy finds happiness with a childless couple, a narrative turn everyone in the audience sees coming within the movie’s first quarter hour. The slapstick antics require Clifton Webb (or rather his unfortunate stunt double) to take a couple of hard pratfalls for the sake of comedy, and there is the repetition of the gag from Sitting Pretty where Webb dumped a bowl of cereal over a naughty baby’s head; here it’s a dish of ice cream over the head of one of the snootier scouts (Jimmy Moss). The boys really aren’t especially mean or vicious to the adults, more disobedient and disrespectful than anything else, so the opportunities for Webb’s Jordan to fight fire with fire don’t really materialize (and none of the other parents we see in the picture even try to maintain control over their children’s behavior. Jordan seems to be the only one who believes in discipline.) The film’s centerpiece is the camping trip which could have paved the way for a lot of potential comic situations but which wastes every single opportunity (it is interesting that the scout troop is integrated, a nice touch for a 1953 film) and ends up being much ado about very little apart from some ice thawing between the starchy Mr. Jordan and the deadpan Mike.

Clifton Webb by this point could play a role like this in his sleep (apart from Mr. Belvedere, he’s much more interesting in domestic comedies as an unlikely father of enormous broods of children as in Cheaper by the Dozen or The Remarkable Mr. Pennypacker). George Winslow uses his one-trick pony frog voice to charming effect, but he’s really one of the least effective child actors who ever rose to star ranks. He rarely looks fellow actors in the eye when he shares a scene with them, and his intonation is so deadpan as to convey no emotion at all. The other child actors in the cast like Jimmy Moss’ spoiled, know-it-all Vernon or Orley Lindgren’s wisecracking Ace act circles around Winslow. Frances Dee plays the loving wife hungry for a child and Edmund Gwenn acts the wily pastor, both with professional ease. Veda Ann Borg pops up in a couple of scenes as Mike’s loud, negligent aunt who never wanted to take him in from the orphanage in the first place. Sammy Ogg, Jimmy Hawkins, and Skip Torgerson are other effective kids in the cast.

The film’s original theatrical 1.37:1 aspect ratio is faithfully rendered in this transfer. (For the record, Mister Scoutmaster was the last Fox movie filmed in Academy ratio though there is a disclaimer on the disc that says the disc was altered from its original ratio for presentation here.) The transfer is unnecessarily dark and is grainier than many Fox MOD releases from the same era. There are the usual problems with dust specks and debris though it appears reel change markers have been removed. Despite the dinginess of the image, sharpness isn’t notably affected, and there is more than average detail in the transfer. The movie has been divided into chapters every ten minutes, so this transfer has 9 chapters.

The Dolby Digital 2.0 sound mix is decoded by Dolby Prologic into the center channel. Volume levels need to be reduced to prevent distortion in the audio presentation. Dialogue is always easily discernible, and the Cyril Mockridge background score (which draws its themes for Winslow’s Mike from Alfred Newman’s score for The Blue Bird) and atmospheric effects don’t clash with one another for dominance. There is low level hiss present throughout the presentation.

Mister Scoutmaster doesn’t reach the heights of hilarity or satire that it might have attained with better writing and crisper direction. Still, it’s a pleasantly sentimental hour and a half with one of the Hollywood Golden Age’s most eccentric personalities.

Goerge "Foghorn" Winslow remains a favorite child star of the 1950s for me...and all the rest have simply faded away!

A great many of the child stars I remember from the 1950s were on TV rather than in the movies: Angela Cartwright, Jon Provost, Tommy Rettig, Jay North.

But I'm sure you remember Brandon De Wilde more fondly and with greater critical estimation than George Winslow. Rusty Tamblyn and Noreen Corcoran were other MGM-contracted children I enjoyed into their young adult years, and all more talented than Mr. Winslow. And the wonderful (Oscar-winning) Bobby Driscoll.
Last edited: Jul 21, 2016

"Foghorn" Winslow has a fun little appearance in Martin & Lewis' "Artists & Models". Considering the building up of friction between Dean and Jerry behind the scenes it's one of their funniest films (Not to mention Shirley McClaine's second film!)
You must log in or register to reply here.
Share:
Facebook Twitter Reddit Pinterest Tumblr WhatsApp Email Link 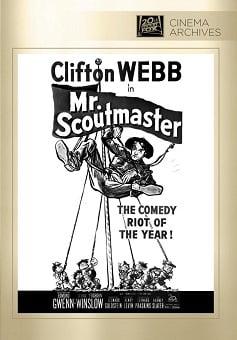