Forum List What's new Dark Style Change width
Log in Register
What's new Search
Menu
Log in
Register
Navigation
Install the app
More options
Dark Style
Close Menu
Posted on June 24, 2018 by Neil Middlemiss
You are using an out of date browser. It may not display this or other websites correctly.
You should upgrade or use an alternative browser.
M:I In 4K is a mission you'll want to accept 4 Stars

I love a good spy movie. In the years I’m not watching a marathon of James Bond, I love to spin offerings from the genre both old and new. Films like the lightweight fare of the domestic spy tale, Sneakers, or the overly serious international pulp of Spy Game, there is just something about clandestine actions, secret rendezvous, and sneaking into and out of seemingly impenetrable locations–exotic and pedestrian–that I find thrilling. No surprise, then, that the Mission: Impossible movies, even the flawed entries, entertain entirely. Now in 4K, they look and sound better than ever.

“Can I ask you something, Kittridge? If you’re dealing with a man who has crushed, shot, stabbed, and detonated five members of his own IMF team, how devastated do you think you’re gonna make him by hauling Mom and Uncle Donald down to the county courthouse?”

In 1996, the Tom Cruise-led Mission: Impossible launched what would become a highly successful film series, and it did so with two gambles. The first was a distinct side step of the original 1970s television series, where each week a small, beloved ensemble of characters, were challenged to engage in the bold and brave execution of daring missions. The film shifted its focus to the Ethan Hunt character played by Tom Cruise. Though there is always a close supporting cast, it is upon Ethan’s pursuits that we, the audience, are asked to invest ourselves. The second gamble was in the plotting. In his review upon the film’s theatrical release, Roger Ebert described the plot as “impenetrable.” That’s not a far cry from the truth, but the labyrinthine plotting, and Brian DePalma’s knowing direction, actually help elevate the film from the trappings of just another action spectacle. In fact, action is at a relative minimum in this inaugural outing, though when the sparks do fly, they fly with style.

The plot revolves around a failed mission, one that in which the team were shadowed by a second as part of an effort to root out a suspected mole in the Impossible Mission Force (IMF) organization. Cruise’s Ethan Hunt, the only member of his team to survive, apparently, after the mission went sideways, is naturally the primes suspect. Confronted, Hunt makes a daring escape, and, on the run, assembles a team and undertakes daring operations on his new mission to clear his name and find the true mole. Making up his team is Luther Stickell, a technical wizard played nicely by Ving Rhames. Franz Krieger is the tactical support player, played gruffly by the likeable Jean Reno, and the demure and lovely Claire Phelps, is the only other surviving member of the original team, is played with some subtlety by Emmanuelle Béart,

Tom Cruise establishes his Ethan Hunt hero as capable but vulnerable, brawny with brains, stylish and sophisticated all at once. The rest of the cast are well suited though it is Rhames who is perhaps the most memorable-certainly memorable enough to have been called back for the sequels.

Jon Voight plays the role of Jim Phelps. Peter Graves, who played the Phelps role in the television series, was slated at one time to appear, but the surprising shift in the nature (and end state) of that character turned him–and, as a result, other original cast members who might cameo-away from the project. Besides the thick plot, it was the change in the Phelps character, and a heavy focus on Cruise’s Ethan Hunt’s character, which most upset fans.

In the end, Mission: Impossible relies upon story complexity and true thriller trappings to enthrall the audience. Plenty of quiet, understated scenes punctuated with set pieces (like the very memorable infiltration of the CIA headquarters, with Cruise hanging precariously above the touch-sensitive floor). There could certainly have been a little more juice in the action and a plot that didn’t require folk to take notes to grasp it the first time around, but for the most part it succeeded in its mission. After all these years, having seen the film many times, the complex plot isn’t really complex, and the multiple views revealing of the plot and scene choreography that went into the film–it’s still a rousing adventure.

A few years ago now, I lamented the video quality on the Blu-ray review and concluded, “a proper redo is in order.” Well, proper redo is exactly what Paramount has given this film.

Filmed with Panavision cameras on 35mm, Mission: Impossible has always appeared somewhat murky in home video releases, but here shines as an example of what a studio’s mea culpa can look like.

This 4K release is a revelation of detail, contrast, and beautifully balanced colors. The improvements are good in the first portion of the film, mainly in detail, but once we get to the film’s major CIA headquarters break-in, things shift into a wonderful new gear, with what seems to be an even greater uptick in detail and clarity, with pure whites in room Hunt must break in and steal the NOC list. The reds and yellows of the fire service trucks and outfits are brilliant. Skin details are superb, and while the seams of the visual effects are laid barer here, it doesn’t detract from the engagement entertainment or the accomplishment of this release.

The Hugh Dynamic Range (HDR10) adds a layer of brilliance on top of the 4K improvements, with the Dolby Vision, available for those so equipped, taking the edge. Black levels are pure, never crushed, and film-grain preserved.

A superb upgrade from all previous home release editions and a must-own for fans.

Though missing an opportunity to take full advantage of the UHD disc format with a Dolby Atmos Track, the available Dolby TrueHD 5.1 offering is a noticeable upgrade from the previously offered Dolby Digital 5.1 track.

The track is fuller, more dynamic than previous releases with greater surround activity during the set pieces, with the Channel Tunnel climax sequences being the most notable improvement. Bass and Low Frequency Effects in the subwoofer are more generous, and the propulsive score by Danny Elfman, once that I have found an even greater appreciation for these past few years, is more crisply and cleanly presented here.

Dialogue is clean and clear out of the center channel.

There are no special features on the UHD disc though the included Blu-ray retains the extras from the previous release (s).

Mission: Impossible’s special features are made up of mostly short mini-features covering various aspects of the film, nothing in depth or terribly revealing. The “Generation: Cruise” and “Excellence in Film: Cruise” extras are also available on the Mission: Impossible II Blu-ray.

Mission: Impossible is a better film than some remember. Perhaps the time that has passed, moving us away from how the film shifted away from the Television series characters in particular, plus the enduring success of the film franchise, have helped. Brian De Palma’s fingerprints are all over this film and it’s unmistakably a product of his vision and approach merged with high-action and spectacle. This is quite a clever film with the progression of Ethan Hunt’s resolve following the decimation of his team finding great payoff during the climax. It is also a film where the plot ‘twists’ aren’t exactly hidden, but obscured enough to give payoff to additional viewings.

Danny Elfman’s score is also an under-sung hero in the film, with a dynamic mix of jaunty playfulness and dramatic, string-led pieces that fuse with what we see to create an action thriller a step-above the rest. Paramount has finally given this film (and its sequels) their due with wonderful 4K releases that show more evidence of the power of this format. Certainly, for adopters of this format, Mission: Impossible on UHD is one you will want to add to your collection.

This is my favorite of the series. The last 2 have been fantastic! I can’t wait for Fallout!!

The film's overwritten, borderline incoherent plot that spits on the legacy of the TV show its based on is what ruins the first Mission:Impossible for me. For that reason, the Mission:Impossible film franchise doesn't really begin until M:I-III.
You must log in or register to reply here. 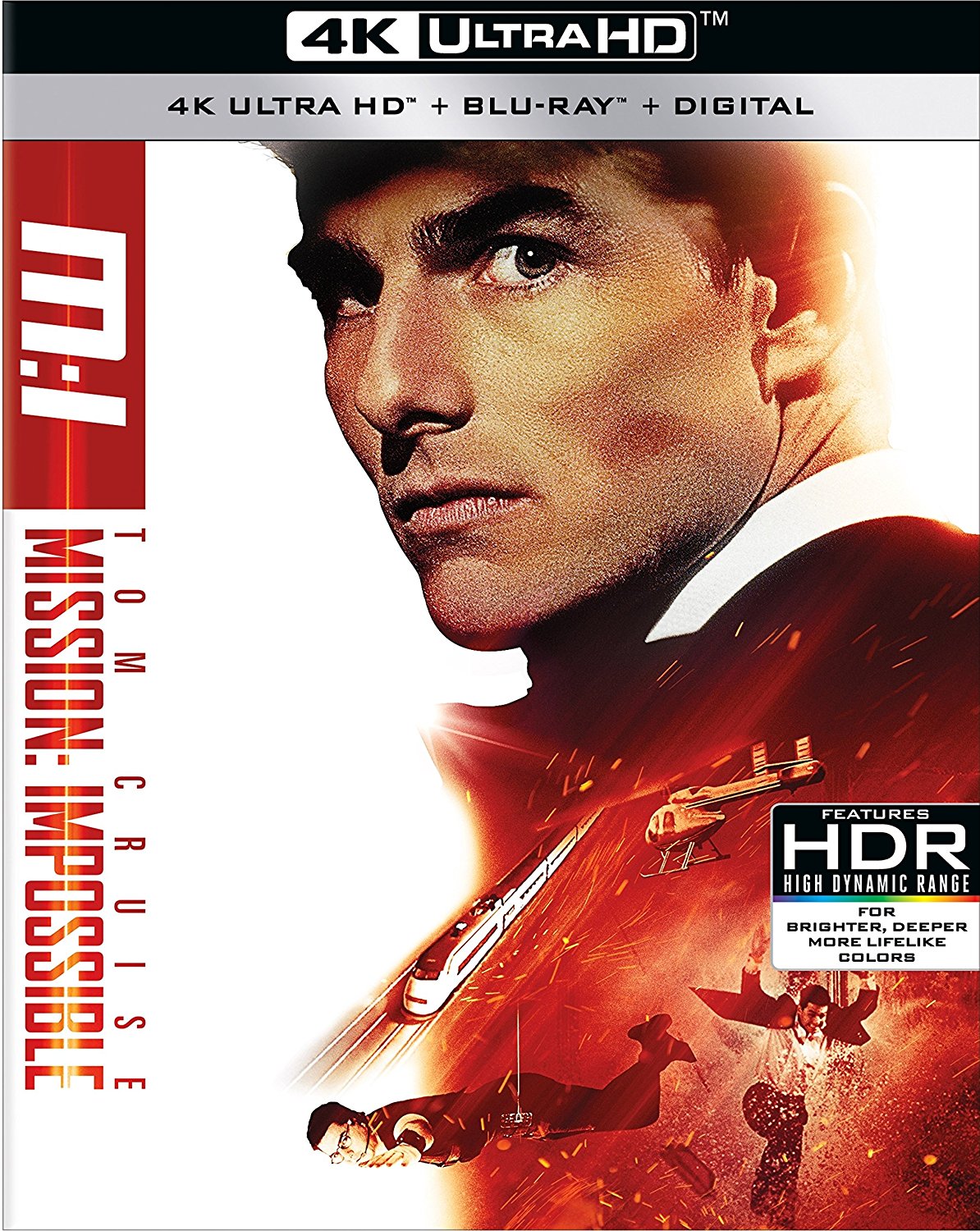