The Mission: Impossible franchise continues to leap from strength to strength. In this fifth film, Tom Cruise once again leads the spirited action and newsworthy stunt work as IMF agent Ethan Hunt, solidifying the Mission: Impossible films as must-watch, tent pole entertainment in the multiplexes. The result is another top-notch entry in the series.

“Hunt is uniquely trained and highly motivated – a specialist without equal – immune to any countermeasures. There is no secret he cannot extract, no security he cannot breach, no person he cannot become. He has most likely anticipated this very conversation and is waiting to strike in whatever direction we move. Sir, Hunt is the living manifestation of destiny – and he has made you his mission.”

On the verge of proving the existence of a villainous organization–a rogue nation–believed to be unspooling chaos and tragedy around the globe, Ethan Hunt and the Impossible Mission Force (IMF) are disbanded by the disenchanted head of the CIA, who believes the CIA should run the IMF. Hunt, seeking to topple the dangerous organization that exists in the shadows, goes rogue himself, pulling in trusted members of his team to help him bring down the rogue nation threatening to destabilize the world. He finds an unusual ally in Ilsa, a member of the organization he’s hunting, who may be an undercover agent, a double agent, or worse.

Paramount’s Mission Impossible series has been a faithful performer for the studio. Following J.J. Abrams’ revitalizing third outing, which while less successful financially, was able to reset the tone and approach after the second film left many disappointed. Abrams then produced the fourth film, Mission: Impossible: Ghost Protocol, with Brad Bird directing. The results were a critical and commercial smash. Following that monstrous success, screenwriter/director Christopher McQaurrie, who had directed Tom Cruise in the gritty and exciting Jack Reacher, was secured. McQaurrie’s style is one of authenticity and clear focus, something that suits the franchise well.

The Mission: Impossible films are perfect vehicles to display the energy, dedication and skills of Cruise, whose determination to perform as many of the wild and dangerous stunts himself, and offer the best experience for the audience, are almost unparalleled today. Cruise has hung himself from the side of a mountain, dangled from the Burj Khalifa in Dubai, the tallest building in the world (in a scene which still makes my palms sweat), and here in Rogue Nation, he allowed himself to be strapped to the outside of a cargo plan as it takes off. It’s a fantastic and dangerous stunt. The plane stunt garnered a good deal of press, and for good reason, but it is just one of several stunts for which Cruise dedicated himself to preparing and pulling off. A less publicized but notable stunt in the film is an underwater sequence where Hunt must hold his breath for over three minutes. Sequences like this are achievable through visual effects or clever editing, but Cruise, seeking to stretch himself and provide something extraordinary for audiences, trained for months with dive experts to extend the time he can hold his breath, enhancing an already tense sequence concept. It isn’t an overstatement to say that Tom Cruise is one of the greatest performers cinema has ever seen.

Once again, the cast here deliver the goods. Tom Cruise’s Ethan Hunt solidifies his place as one of cinema’s most memorable roles, richly imbued with physical prowess and good humor. Perhaps less intense a portrayal than we have seen before, Cruise is well attuned to the story at hand and what audiences thirst for. Returning for a welcome third time is Simon Pegg as the film’s primary comic relief, Benji. Jeremy Renner also returns as William Brandt, agent-turned bureaucrat. Renner’s character finds a better footing this time out with an interesting blend of bureaucrat and mission operative, with just a dash of wit thrown in, too. It’s a perfect complement to the more bumbling and nervous humor served up by Pegg’s Benji. Ving Rhames also steps back into the franchise as imposing, loveable technical genius Luther Stickell, for more than just a cameo this time. Alec Baldwin joins the mix as head of the CIA and political foil for the IMF, while Rebecca Ferguson makes her first memorable appearance as Ilsa, the intently capable agent whose loyalties are blurred and with whom Hunt has little choice but to partner and trust. Finally, we have the interesting choice of Sean Harris as the unusual villain, Solomon Lane. Harris produces a sly villain, a snake in the grass type rather than an imposing menace (ala Phillip Seymour Hoffman’s Owen Davian from M:I III). He offers a disconcerting, unsettling opponent, and avoids the more operatic villainy we have seen before.

Rogue Nation is well crafted, with sharp, concise storytelling, and crisp, focused action sequences. There are performances that mine scenes for the requisite level of humor and drama, and a brisk but not breakneck pace allowing the story to unfold without seeming like bits of story are simply glue for the impressive action sequences. Where Rogue Nation can be faulted is its reliance upon the Impossible Mission Force (IMF) having to go underground and work outside (and against) the rules to save the day and clear their name. It’s a tried and true device for some of the prior Mission: Impossible films and certainly the more recent James Bond movies. Admittedly it works. It also provides a reliable way to create drama and challenge for our heroes. Despite clever inventions within that convention, it’s time to explore other ideas.

Shot on 35mm, and digitally, Mission: Impossible Rogue Nation looked impressive on Blu-ray, with stunning detail and clarity, and the delights of the look of film left to its own devices. Now, appearing in 4K UHD, Rogue Nation is glorious.

All that was good about the Blu-ray, solid black levels, flesh tones that were warm but proper, and flawless shadow detail, are inched up in quality thanks to the finer detail and a lovely grading of HDR10 and Dolby Vision (for those so equipped). Shots of London following the are sublime, and the entire Opera sequence dazzles with the fine details, pops of reds, blues and yellows amongst the broodier low-lights. The entire film is wonderfully cinematic. Colors are wonderfully rich throughout the film, and while the difference here compared to the previously excellent Blu-ray isn’t as night and day as the earlier Mission: Impossible films, this is still the best way to watch this film.

A robust audio offering highlighted by a Dolby Atmos track (the Dolby TrueHD 7.1 was used for this review) marked by expert balance. Full-throated rumbles, directional sound effects and crisp audio primarily in the center channel stand out. The audio is highly immersive, particularly during the daring motorcycle chase sequence.

Providing the score for this latest M:I is the talented Joe Kraemer, composer for the previous Christopher McQuarrie directed films (Way of the Gun and Jack Reacher). Using only instruments that would have been available in the 1960s (when the television series was around), Kraemer weaves a jaunty score, pulling in themes from composer Michael Giacchino’s work on the two previous entries, and delivers a thrilling and innately enjoyable soundtrack. His rendition of Lalo Schifrin’s iconic theme might just be the best of the five films. (The soundtrack is available now from La-La Land Records).

There is something deliciously old-school–in the best possible way-about Rogue Nation. Grounded, with real and dangerous stunt work, a viscerally exciting sequences, involving (if detailed) plotting, impressive direction, and a perfection to the pacing that keeps the film entertaining from start to finish. The slick look of the Brad Bird directed outing, Ghost Protocol, mixes here with a just a little more grit that suits the franchise nicely.

Christopher McQuarrie, following the success of Rogue Nation, signed to return to the franchise, the first director to make a return trip, and by all accounts, the next outing of Ethan Hunt and team will be another great cinematic adventure.

It says a lot that the upcoming Fallout is going to be the first direct sequel in this franchise, with Rebecca Furguson and Sean Harris reprising their roles. Clearly Cruise, Abrams, and Mcquarrie saw the overwhelmingly positive response Rogue Nation got (all deserved) and thought to themselves if it aint broke...

Lets all hope that doesn't yield a Spectre then.
Reactions: Osato and Keith Cobby

Lord Dalek said:
It says a lot that the upcoming Fallout is going to be the first direct sequel in this franchise, with Rebecca Furguson and Sean Harris reprising their roles. Clearly Cruise, Abrams, and Mcquarrie saw the overwhelmingly positive response Rogue Nation got (all deserved) and thought to themselves if it aint broke...

Lets all hope that doesn't yield a Spectre then.
Click to expand...

The Mission: Impossible franchise continues to leap from strength to strength. In this fifth film, Tom Cruise once again leads the spirited action and newsworthy stunt work as IMF agent Ethan Hunt, solidifying the Mission: Impossible films as must-watch, tent pole entertainment in the multiplexes. The result is another top-notch entry in the series. 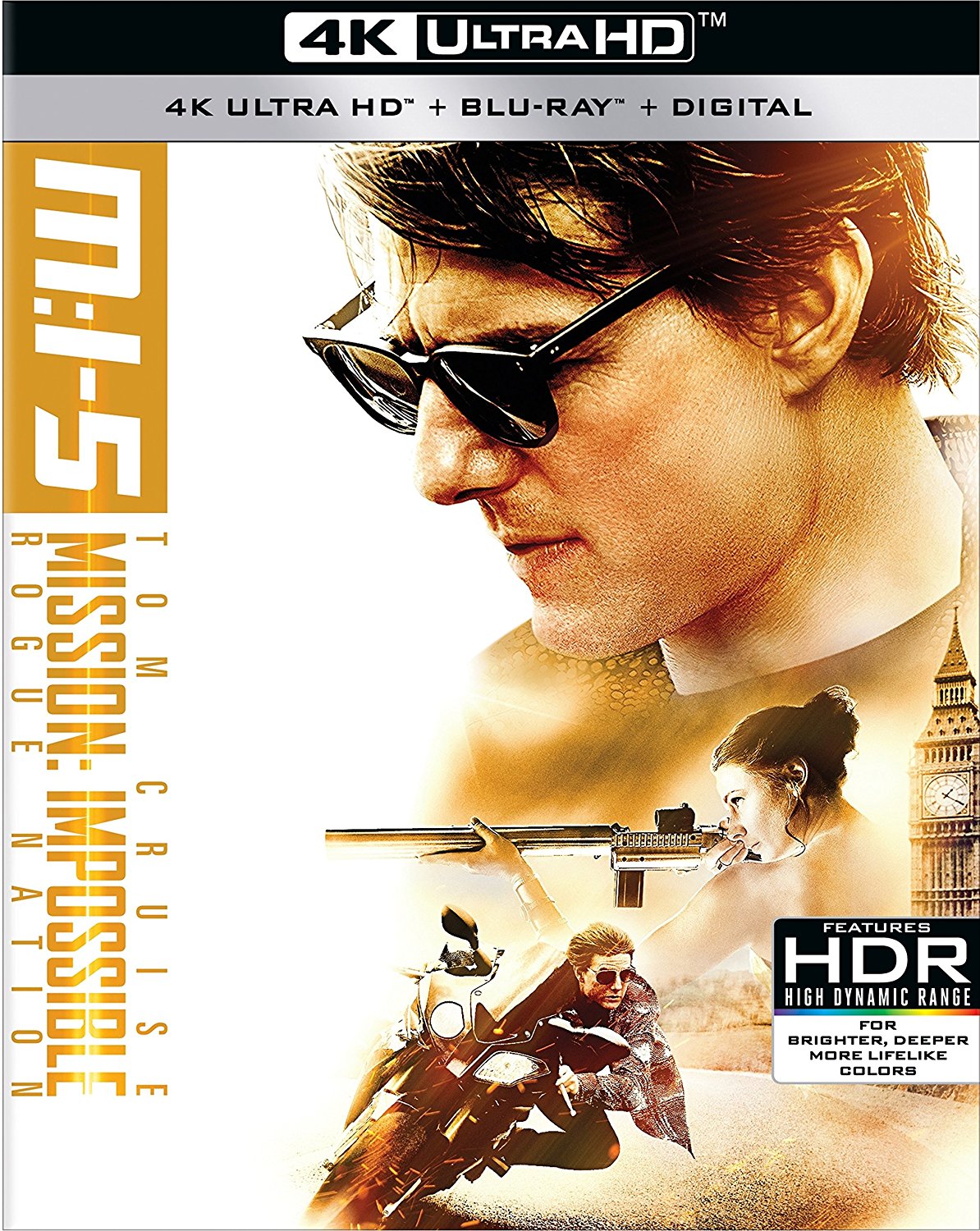