Forum List What's new Dark Style Change width
Log in Register
What's new Search
Menu
Log in
Register
Navigation
Install the app
More options
Dark Style
Close Menu
Posted on March 6, 2017 by Matt Hough
You are using an out of date browser. It may not display this or other websites correctly.
You should upgrade or use an alternative browser.
Unusual anime biography of a renowned artist 3.5 Stars

An episodic, arty look at the life of O-Ei, the daughter of noted 19th century Japanese artist Katsushika Hokusai, is recounted through lovely pastel animation and with some surprisingly adult situations on tap in Keiichi Hara’s Miss Hokusai.

An episodic, arty look at the life of O-Ei, the daughter of noted 19th century Japanese artist Katsushika Hokusai, is recounted through lovely pastel animation and with some surprisingly adult situations on tap in Keiichi Hara’s Miss Hokusai. As with the best anime, the air of delicacy that pervades the drawing is sometimes at exciting odds with the storytelling itself, and that contrast often makes for an engrossing, unusual mix of narrative flavors and colors. The Universal release offers both the original Japanese soundtrack and an expertly directed English redub which will please those who loathe subtitles. Either way, it’s a fascinating story.

O-Ei (Anne Watanabe, Erica Lindbeck in English) is the hard-working daughter of Katsushika Hokusai (Yutaka Matsushige, Richard Epcar in English), a stern taskmaster whose lofty expectations for himself and for his apprentice daughter are hard to reach. O-Ei, in fact, finds herself completing paintings that her father discards in order to meet deadlines so they can be paid. O-Ei is on the verge of womanhood and is not only of romantic interest to another artist Kuninao (Kengo Kôra, Robbie Daymond in English) but also finds herself experimenting with same sex eroticism as well. But of principal interest to O-Ei is her little sister O-Nao (Shion Shimizu, Courtney Chu), blind since birth and discarded by their father for being less than perfect. O-Ei’s many experiences with her sister stimulate her artist sensibilities especially since O-Nao’s keen use of her four remaining senses help O-Ei get in touch with her own sensibilities more keenly.

Miho Maruo’s screenplay is based on the Japanese manga (graphic novel) Sarusuberi by the late Hinako Sugiura, but the film’s five sections are fairly episodic and linked mainly through the main title character. Sometimes, the storytelling goes off into wild tangents like a demonic depiction of hell which has disturbed one of Hokusai’s patrons or surreal explosions of imagination such as when a dragon comes down from heaven or Hokusai’s hands begin stretching around the town, and director Keiichi Hara doesn’t back away from showing these flights of fancy or the erotic drawings for which O-Ei becomes well known (and that certainly includes that lesbian experience in a brothel which she undertakes). This is one anime which the youngest members of the family might not find stimulating (the PG-13 rating is no accident), but it’s rather refreshing to go to adult places within the confines of animation, and the sorry parenting that Hokusai displays is not soft-pedaled at any time. Other sequences, however, are enchanting especially an extended section where O-Ei takes her little sister out for an excursion in the snow, and the blind youngster gets to experience snow on her face and falling in her hair for the first time. Other scenes of Edo (now Tokyo) particularly on the samurai bridge at dusk are maddeningly colorful.

The voice actors, particularly the Japanese actors, do their roles proud. Anne Watanabe mixes shyness with grit and determination as the title character (and also serves as the film’s narrator), and Gaku Hamada as her bird-brained brother Zenjiro is also very entertaining (Ezra Weisz plays the role decently in the English language version). Only one English-speaking actor manages to match the intensity of his Japanese counterpart: Richard Epcar’s Hokusai is every bit the single-minded, feisty artist that Yutaka Matsushige is in the Japanese version.

The film is presented on disc framed at 1.78:1 and is offered in 1080p resolution using the AVC codec. Sharpness is strong throughout without ever seeming too edgy or artificially sharpened. Apart from a couple of daytime scenes with bright blue skies or that striking scene at dusk with vivid reds and oranges, most of the colors are more pastel and dullish in nature. Contrast has been consistently applied to the image, and black levels are rich and deep. There is no banding at all on display. The English subtitles are in white and are easy to read. The movie has been divided into 23 chapters.

The DTS-HD Master Audio 5.1 mix is offered in both English (the default) and Japanese. I listened to half of the movie with each track, and they’re equally effective aural presentations. Dialogue has been superbly recorded and is mostly in the center channel with just a touch of directionalization. Harumi Fuuki’s music (which occasionally uses some anachronistic hard rock strains for a story from two centuries ago) gets the full surround treatment, and the most arresting use of the split surrounds comes with the atmospheric sounds of nature which have been placed throughout the soundstage in a most effective manner.

The Making of Miss Hokusai (1:56:06): surprisingly longer than the actual film, this feature length documentary on the film’s rocky production takes us from the initial conception and script construction in 2013 through storyboarding and a nightmarish six-month hiatus period director Keiichi Hara takes from the office due to doubts about decisions he has to make and dissatisfactions with his work. Deadlines are met at the very last moment for a May 2015 premiere.

Promo Trailers (HD): Only Yesterday, A Monster Calls, When Marnie Was There, Sing.

An adult anime rendering of a portion of the life of Japanese artist O-Ei Hokusai, Keiichi Hara’s Miss Hokusai is exquisitely drawn and expertly acted, rendered even more appealingly in Universal’s beautiful Blu-ray combo package of the film with reference level sound and picture.

I really enjoyed this film theatrically and would recommend at least a rental to anybody even mildly interested. I may consider picking it up down the line. Thanks for the review of the disc, Matt.

Thank you for the excellent review of Miss Kokusai. I did not see this film theatrically but I do have preordered. I teach some of Katsushika Hokusai's works in my courses and the trailer really caught my attention. Your review has only whetted my appetite even more.

Why only 3.5 for the story? You didn't seem to really explain any negatives in that review. I wonder if this gets a knock down just for being animated?
You must log in or register to reply here. 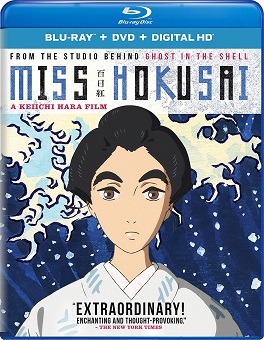