Satisfactory if a mixed bag of mystery 3 Stars

Shintaro Shimosawa’s Misconduct is one of those labyrinthine mysteries in which inevitably pieces of its puzzle do fit together but just a little uncomfortably.

Shintaro Shimosawa’s Misconduct is one of those labyrinthine mysteries in which inevitably pieces of its puzzle do fit together but just a little uncomfortably. A top-flight cast enhances a story that draws one into its web of conflicting sequences told out of continuity, and the direction by a first timer finds interesting ways to present the mundane. It’s often trickier than it needs to be, however, and the ultimate resolution won’t leave you very satisfied, but it’s a not unpleasant trip until that final surprise is sprung.

Ambitious lawyer Ben Cahill (Josh Duhamel) is presented with some damning evidence against a multi-billion dollar pharmaceutical company by the abused girl friend (Malin Akerman) of its dishonest CEO Arthur Denning (Anthony Hopkins). This girl friend Emily Hynes was one of Ben’s former college sweethearts, and it seems she’s got an agenda of her own when she comes on strongly to Ben knowing full well that he’s married to Charlotte (Alice Eve) who has recently had a devastating miscarriage. But Ben’s boss Charles Abrams (Al Pacino) is eager to proceed with the lawsuit against the company knowing it could easily bring in a nine figure settlement. When Emily turns up dead and Ben discovers the body but doesn’t call the police for fear of tainting their case, the spotlight of blame inevitably falls on him since he was observed entering and leaving the apartment by her chatty neighbor (Leah McKendrick).

The screenplay by Simon Boyes and Adam Mason has touches of Presumed Innocent, Jagged Edge, Malice, and several other similar mysteries where guilt and innocence are both shrouded in a combination of shadowy motives and a collection of characters who are all to one degree or another guilty of something. One can’t look too closely at the construction of the puzzle before he sees cracks in its logic and leaps of faith that don’t ring true in the real world, but taken as a surface thriller, there’s enough here to hold one’s attention (to say more might ruin the surprises built into the story). But the scenarists have not presented their scenes in chronological order making piecing together the story something of a chore at various times during its unfolding. Director Shintaro Shimosawa, however, does his part by presenting the narrative engagingly with a camera that seems to have a mind of its own: cleverly backing out of a room where an illicit tryst seems to be unfolding only to have the participants flop back into the frame to continue their business; later allowing an overhead camera to slowly spin around to reveal something unsettling. With these slick camera moves and some thundering “boo” moments on the soundtrack, there’s more than enough here to keep a viewer off balance and on his guard. A mysterious Korean biker seemingly dying of consumption who nevertheless threateningly shows up from time to time adds another layer of enigma to an already perplexing state of affairs.

Josh Duhamel has the lion’s share of emoting to do here as the over eager lawyer who finds himself caught up in a much more complex scenario than even he dreamed possible, and he’s just identifiable enough to retain audience sympathy (though he’s no saint; the film makes clear he’s breached ethics time and again to gain a desired outcome with his cases). Malin Akerman is certainly an enigmatic wild card in the story as she seems to be both vulnerable and dominant at regular intervals. Alice Eve only sporadically finds some colors in an otherwise emotionally sterile performance, but Glen Powell has bravura to spare as Ben’s work confidante. Byung-hun Lee keeps everyone guessing as the baffling biker, but Julia Stiles and Marcus Lyle Brown seem pretty much wasted as Denning’s potent enforcers. As for the cast’s two Oscar-winning co-stars, neither Al Pacino nor Anthony Hopkins indulges this time out in the kind of flagrant showboating that has often characterized their late-career performances though Pacino does affect an actory southern accent that might sound legit to someone outside the South but is pure artifice for those in the know.

The film is framed at its theatrical aspect ratio of 2.40:1 and is presented in 1080p resolution using the AVC codec. Sharpness is very good without being quite at reference levels while color saturation is excellent with realistic skin tones. Contrast has been consistently maintained even if black levels are only good and not great. The film has been divided into 16 chapters.

The DTS-HD Master Audio 5.1 sound mix uses deep, deep bass in the music score by Federico Jusid to keep the viewer unsettled and on edge throughout and is by far the most impressive aspect of the mix. Dialogue has been well recorded and has been placed in the center channel. Atmospheric effects occasionally use the full surround array to be truly immersive, but the rear channels apart from the music are ignored for a goodly portion of the movie.

Deleted Scenes (3:26, HD): three scenes may be watched in montage or separately.

Misconduct offers a decent mystery for fans even if certain plot pieces and character motivations seem a bit strained and somewhat weak. The Blu-ray disc certainly offers a very enjoyable picture and sound experience for those who wish to indulge in its mixed pleasures. 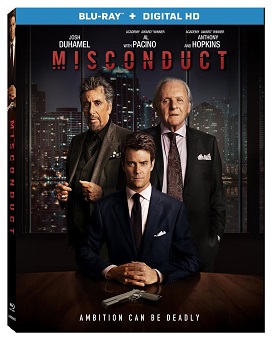