Forum List What's new Dark Style Change width
Log in Register
What's new Search
Menu
Log in
Register
Navigation
Install the app
More options
Dark Style
Close Menu
Posted on December 1, 2019 by t1g3r5fan
You are using an out of date browser. It may not display this or other websites correctly.
You should upgrade or use an alternative browser.
Puzzle like amnesia thriller debuts on Blu-ray 4 Stars

Director Edward Dmytryk was a survivor of Hollywood’s tumultuous period between the late 1940’s and early 1950’s. Initially blacklisted as one of the Hollywood Ten following the success of Crossfire (1947) – being caught up in the Red Scare that also saw many of his fellow contemporaries suffering the same fate – he broke free and even managed to find greater success with The Caine Mutiny, Broken Lance (both 1954), Raintree County (1957), and The Young Lions (1958). Mirage represents a return to the suspense and noir genre that helped him breakthrough; previously released on DVD, Kino has licensed the film from Universal for its US Blu-ray debut.

David Stillwell (Gregory Peck) is a mild mannered accountant for a New York firm who, all of a sudden, can’t seem to remember events from the last two years of his life. Bewildered, and wanting to know more about his past, he hires a private eye (Walter Matthau) to help him uncover clues to his identity. Also wanting to assist Stillwell – for various reasons – are the woman in David’s life (Diane Baker) and a group of people working for a mysterious man known as “the Major”, convinced that David has something of value to them. The key lies deep with Stillwell’s mind…

When it was first released, Mirage was compared to the works of Alfred Hitchcock. However, the connections between Hitchcock and director Edward Dmytryk are superficial at best; while both directors have used amnesia as a plot device (Hitchcock did this with Spellbound), this movie uses more of a fractured narrative and visual style to drive the point home. The use of flashbacks inserted at key points into the story can be a bit jarring for first time viewers, but they make more sense upon repeated viewings; also, the movie makes a few overtures into themes that would be explored upon more fully in movies of the 1970’s: mistrust of authority as well as the contradictory nature between war and peace. At first glance, Mirage may seem like a Hitchcock thriller, but has plenty more going on that has earned it a re-evaluation over the years as one of the best thrillers of the 1960’s – a recognition that was elusive upon initial release.

Gregory Peck is solid in the lead as the seemingly amnesiac Stillwell; it’s interesting to note that he played a somewhat similar role in Alfred Hitchcock’s Spellbound twenty years prior to this film’s release. Diane Baker makes for a luminous female lead as the woman from David’s past; like Peck, Baker also had experience working with Hitchcock – she appeared in Marnie just a year before this movie. Walter Matthau adds to his impressive roster of performances as the deceptively easy going private eye (he was on the brink of his Oscar-winning breakout role in Billy Wilder’s The Fortune Cookie); George Kennedy – also a couple years away from an Oscar-winning breakout – is also notable as a heavy with connections to the mysterious major. Also making memorable impressions here are Leif Erickson as the mysterious major, Walter Abel as a noted peace activist whose supposed suicide is key to the mystery, Robert H. Harris as a psychiatrist who’s able to help David uncover the reason for his amnesia, Jack Weston and House Jameson as a pair of hired muscle out to retrieve David for the major, Neil Fitzgerald as a kindly old concierge, and Franklin Cover (years before hitting it big on TV as Tom Willis in The Jeffersons) as a group leader in Central Park.

The film is presented in its original 1:85:1 aspect ratio for this HD transfer. For the most part, film grain is organic with some shifts in density from scene to scene; fine details and grey scale are also rendered faithfully as well. Issues like dirt, dust, and scratches are fairly minor throughout; overall, the transfer is an improvement over the previous DVD and likely represents the best the movie will ever look on home video.

The original mono soundtrack is presented on a DTS-HD Master Audio track for this release. Dialogue is clear and strong along with the sound mix; Quincy Jones’ score has strong ambiance and fidelity with out being intrusive on the dialogue. Overall, this is likely the best the movie will ever sound on home video and is another improvement on the previous DVD.

Commentary by film historians Howard S. Berger, Steve Mitchell, and Nathaniel Thompson – Recorded for this release, the trio talk about the movie and its elements, particularly why the film isn’t really a Hitchcock styled thriller – despite what contemporary reviews of the film at the time of the release tried to make it out as.

A Face in the Dark: Diane Baker on Mirage (14:08) – Newly recorded for this release, the actress talks about the movie as well as some of the memories she had from making the film.

Bonus KLSC Trailers – Night People, The Taking of Pelham One Two Three, Foreign Intrigue & The File of the Golden Goose

Mostly passed over upon first release, Mirage has been reappraised over the years and has finally been recognized as a great gem of a thriller that’s been overlooked. Kino should be commended for bringing the film to Blu-ray, with solid scores for both picture and audio quality and nice bunch of special features. Recommended for an upgrade or fans of thrillers.

Oh yes, I remember all those newspaper and magazine critics saying this was like a Hitchcock film. I enjoy this film a lot and Walter Matthau in particular. I especially appreciate the unsympathetic psychiatrist explaining what amnesia is and isn't.

Thank you for your fine review. I plan on picking this one up if it's discounted enough when Kino has their next sale in December.

If this is the same transfer as the foreign Blu-ray, I found it not wonderful. This is a film I absolutely love - if anyone has seen both, I'd love to hear your thoughts.
You must log in or register to reply here. 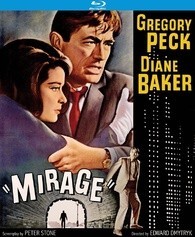