A genuine holiday classic, Miracle on 34th Street still works its magical story of heart and hope, faith and trust seven decades after its original release.

There are a handful of holiday film perennials that start to make themselves known around this time of year: It’s a Wonderful Life, several different incarnations of Dickens’ A Christmas Carol, and the magnificent 1947 charmer Miracle on 34th Street. If it’s less grandiose than It’s a Wonderful Life or less fanciful than A Christmas Carol, Miracle on 34th Street seems much more grounded in reality and thus represents an appealing alternative to such otherwise fanciful holiday fare. So, do I believe in Santa Claus? After years of watching Miracle on 34th Street, I’m still not quite sure. The movie is so beautifully put together that it’s hard not to. This 70th Anniversary Edition of the movie is its second Blu-ray release and is the identical disc from eight years ago. Only, a digital copy has been added to the package.

Doris Walker (Maureen O’Hara) is a no-nonsense holiday organizer for Macy’s Department Store in New York City. Divorced with a six-year old daughter Susan (Natalie Wood), Doris keeps a tight rein on young Susan’s flights of fancy, but her strict mistrust of anything fanciful gets a solid shakedown when Kris Kringle (Edmund Gwenn) begins working as the department store Santa Claus at Macy’s. He insists he’s actually Santa Claus and makes it his business to spread holiday cheer not only to Doris and Susan but throughout the store and especially to Fred Gailey (John Payne), Doris’ apartment house neighbor who’d love to get closer to Doris and Susan but disagrees with Doris’ overly rigid child-rearing tendencies. Trouble ensues when department store psychologist Granville Sawyer (Porter Hall) takes an instant dislike to the agreeable Kris Kringle and looks for ways to get him committed as insane.

Stretching from Thanksgiving to Christmas, George Seaton’s Oscar-winning screenplay (based on the Oscar-winning original story by Valentine Davies) has more than the requisite amount of whimsy, humor, warmth, and emotional connection, and individual sequences in the film like Santa’s emotionally rich encounter with a lonely Dutch girl, Kris’ teaching Susan how to mimic a monkey, the two Kris/Sawyer smackdowns, and the climactic trial scenes in which a real miracle is desperately needed to save the day leaving the audience rather nervous as to the outcome still resonate joyously seventy years after the film’s first release. True, Seaton’s direction is nothing special. It’s competent and comfortable in that studio-bound tradition of the period in which the movie was produced (Gwenn really did play Santa in the 1946 Macy’s Parade; those are not staged backlot shots but were photographed in New York City during some actual location photography), but that overall lack of dazzle in most of the interior scenes is also part of secret to the movie’s charm. Its effect on the viewer’s persona is earned honestly through the clever lines, the engaging characters, and the special camaraderie evinced by the members of the cast who carry out their roles with the utmost sincerity and accuracy.

Neither Maureen O’Hara nor John Payne were ever any better than they are in the film with these simple but wonderfully genuine portrayals. Natalie Wood’s gradual resurrection into the world of childhood from the dour, serious-minded child-adult she is when we first see her is one of the screen’s most delightful juvenile performances (why she wasn’t honored with a juvenile Oscar that year is an unfathomable mystery). Edmund Gwenn’s Oscar-winning Santa is a delight, and if he isn’t really Santa Claus, the real thing should be modeled on this terrific copy. Porter Hall gets to be the movie’s risible villain, and he’s entirely worthy of the raspberries. Gene Lockhart shifts around most uncomfortably as the judge who takes on the case against Santa Claus while farther down the cast list are memorable early appearances by Thelma Ritter and Jack Albertson, both simply delectable playing stock characters which they’d develop with even more surety in the years to come.

The film’s 1.37:1 theatrical aspect ratio is delivered in a 1080p transfer using the AVC codec. Though an occasional shot or two seem overly dark and a bit lackluster, most of the film is sharp and beautifully detailed with a very solid grayscale rendering that produces impressive high definition images. The grain structure is retained and offers a very film-like image while the transfer’s sharpness makes the occasional use of rear projection screens obvious and typically period. Occasional inconsistencies in contrast don’t weigh down the visual presentation. The film has been divided into 24 chapters.

The DTS-HD Master Audio repurposed 5.1 sound mix (obviously taken from stereo sound stems when the music was recorded) basically allows the delightful Cyril J. Mockridge music score to be opened up into the surround channels where it sounds wonderfully recorded and is pretty demonstrative without overpowering the dialog which is rooted to the center channel. In the quietest moments, you might catch a tiny bit of low level hiss, but it’s never objectionable. However, the surrounds are virtually silent for much of the movie, and there really isn’t much on the low end of the mix. The lossy Dolby Digital 2.0 mono mix (very low bitrate 192 kbps) is available for those who wish a mono track to recreate the original theatrical experience.

Audio Commentary: Maureen O’Hara contributes a lovely commentary, a sweet reminiscence about coming to America and how she came to make the film. There are many silent spots, but fans of the film will appreciate this commentary carried over from the film’s DVD release.

Hollywood Backstory: Miracle on 34th Street (22:06, SD): the usual excellent summation/behind-the-scenes story on the making of the film. Among the participants in telling the story are film historian Rudy Belhmer, original star Maureen O’Hara plus other bit actors from the film and Natalie Wood’s sister Lana.

Promotional Short (5:08, SD): takes a unique approach to selling the movie without any mention of its holiday theme. (The film was a summer release but was so popular it ran through the holiday season.) Rex Harrison and Anne Baxter make quick appearances, and that looks like Gene Nelson in the background as a studio executive.

Macy’s Thanksgiving Day Parade: Floating in History (15:32, SD): goes into some detail on the arrangements made for Fox to shoot the 1946 Macy’s Parade for use in the movie using Maureen O’Hara and Edmund Gwenn in the actual parade being covered by dozens of cameras.

Art Gallery: a brief step-through poster gallery of black and white posters and one sheets for advertising the movie.

A genuine holiday classic, Miracle on 34th Street still works its magical story of heart and hope, faith and trust seven decades after its original release. For those who don’t already have this film on Blu-ray or need a digital copy to complete their collections, highly recommended! 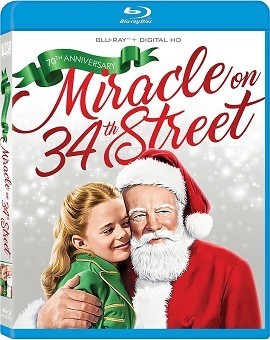