Forum List What's new Dark Style Change width
Log in Register
What's new Search
Menu
Log in
Register
Navigation
Install the app
More options
Dark Style
Close Menu
Posted on September 28, 2016 by Matt Hough
You are using an out of date browser. It may not display this or other websites correctly.
You should upgrade or use an alternative browser.
No surprises in this fairly raunchy and predictable comedy 3 Stars

A typical raunch-infested comedy with all of the predictable twists and turns that such films always include, Jake Szymanski’s Mike and Dave Need Wedding Dates offers fine performers doing improvisational riffs in scene after scene and hoping they paste together to make a releasable movie.

A typical raunch-infested comedy with all of the predictable twists and turns that such films always include, Jake Szymanski’s Mike and Dave Need Wedding Dates offers fine performers doing improvisational riffs in scene after scene and hoping they paste together to make a releasable movie. While the Hawaiian locations are eye-popping, the characters populating them are cartoon exaggerations of real people, tiresome in their extremes and about as believable as Popeye and Bluto fighting over Olive Oyl. For Generation Xers and Millennials, this is what passes today as comic filmmaking, but wit and comic construction seem far removed from the salty language and sexually-oriented sight gags that punctuate this endeavor.

Having ruined many previous family affairs with their childish, frat-boy antics and lack of consideration for anyone other than themselves, siblings Mike (Adam Devine) and Dave (Zac Efron) Strangle are begged by their little sister Jeanie (Sugar Lyn Beard) to find nice, grounded girls to bring to her Hawaiian wedding to Eric (Sam Richardson). The boys try advertising for nice girls on Craigslist, but wild girls is all they find, that is until the wildest of the wild, Tatiana (Aubrey Plaza) and Alice (Anna Kendrick), bamboozle them into believing they’re respectively an elementary school teacher and a hedge fund manager (though, of course, none of them have a clue what a hedge fund actually is). Once in Hawaii, naturally, the girls go wild and help cause a series of disasters that threaten to put an end to the wedding and to Mike and Dave even having a family that will claim them.

The script proper is the work of Andrew J. Cohen and Brendan O’Brien who based their story on real-life Strangle brothers, but it’s clear from the disc’s bonus features that this is a movie constructed on the fly from improvisations from all of the principals, and given the R-rating, allowing for lots of vulgar language, drug use (an Ecstacy-fueled interlude is the film’s nadir), and dick jokes. Thus, it continually seems rambling and disconnected with inserted sequences (like a steam room sexcapade and a massage room one-on-one for Jeanie and her message therapist) and features accidents (Jeanie is facially scarred the night before the wedding and yet miraculously manages to be healed by the climax to the film two days later) and heartfelt revelations that the movie really doesn’t earn to try to bring it back to a sane, rational place. (The four stars even engage in a shameless musical number at the wedding party – “This Is How We Do It.”) Director Jake Szymanski pushes things through no matter how lame or exaggerated they are and even manages to take our breath away with some grandiose vistas during a dune bike tour of the Jurassic Park locations that’s the best sequence in the movie. But there’s never much doubt that the two couples, as airheaded and self-absorbed as each individual member is, will somehow emerge on the tail end of the wedding weekend with a new perspective on life and a new reason to forge ahead with the business of living.

The film’s two more practiced comedians Adam Devine and Aubrey Plaza completely steal the show from their less adept comic counterparts Zac Efron and Anna Kendrick. Efron must basically be the straight man in the film once the couples reach Hawaii and as such isn’t very interesting apart from taking every available opportunity to show off his buff body and chiseled arms. Anna Kendrick is completely miscast as a bad girl, not believable for a second as the selfish, bird-brained drunk who can barely put two sentences together but who later becomes a reasonable sounding board for Efron’s Dave to pour his heart out to. Plaza’s Tatiana does a similar turnaround in her bad girl ways even though there aren’t really any reasons for her character reversal except that the script demands it. Much better are the performances in smaller roles: Alice Wetterlund as cousin Terry who takes every opportunity to show up her male cousins and score a date with Tatiana, Mary Holland as a bossy maid of honor, and Sugar Lyn Beard as Jeanie (though her whiny, nasally voice does get a bit grating the more we hear it). Stephen Root and Stephanie Faracy are solid as the parents of the bride and her idiot brothers.

The film is framed at its theatrical aspect ratio of 2.39:1 and is presented in 1080p resolution using the AVC codec. Sharpness is usually excellent though there are some shots which appear a bit soft for no good reason, likely an error in focus pulling rather than with the transfer. Color is rich and robust, all the better to show off those stunning Hawaiian locations. Contrast has been consistently applied, and black levels are deep and inviting. The film has been divided into 24 chapters.

The DTS-HD Master Audio 7.1 sound mix uses its surround environment mainly to make the most of the Jonathan Schwartz music score and a succession of hip-hop and rock tunes. Ambient effects don’t always get the sophisticated spread through the fronts and rears that one expects from modern sound design. Dialogue has been well recorded and has been placed in the center channel apart from an occasional bit of directionalized vocal placement.

Audio Commentary: director Jake Szymanski (with an occasional comic assist from a recording supervisor who occasionally breaks into his talking with suggestions for making a better track) reminisces about making the film as the scenes unfold in front of him. It’s a full track with few pauses and naturally full of praise for all of his collaborators.

Deleted Scenes (223:48, HD): fourteen scenes may be watched in montage or may be selected individually from the menu.

Extended Scenes (39:12, HD): sixteen scenes are also available for individual viewing or together in succession.

Alternate Storyline (7:45, HD): a subplot involving a roasted pig was cut from the film and those scenes are offered here.

Bits on Bits on Bits (6:21, HD): a succession of improvisations featuring the main actors.

Gag Reel (5:27, HD): some of these bits are also featured in the gag reel that is shown behind the closing credits.

Funny or Die Shorts (6:40, HD): three sequences can be watched together or separately and feature the cast sharing wedding stories, a riff on Adam Devine’s sensitivity to the clapperboard, and Zac Efron’s absorption with his new selfie stick.

Art Gallery: forty stills and behind-the-scenes shots can be forwarded manually or automatically.

Promo Trailers (HD): Why Him?, Absolutely Fabulous: The Movie.

Not as funny or as inventive as Wedding Crashers or The Hangover, Mike and Dave Need Wedding Dates would kill to be mentioned in the same sentence with those very successful 21st century comedies. Instead, we get fairly typical and predictable raunch and ribaldry that substitutes for genuine humor and wit in today’s comedies. 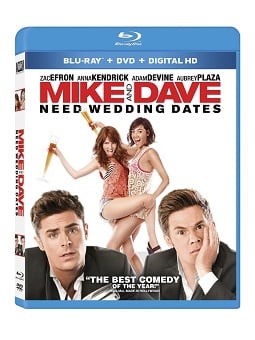