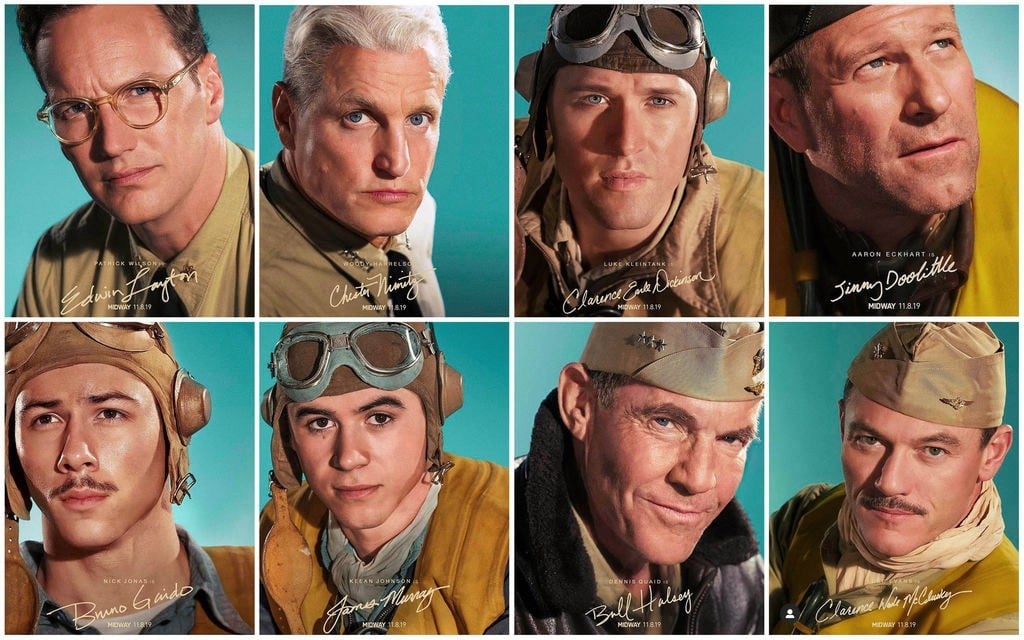 In response to the catastrophic failure of military intelligence that led to the decimation of a good portion of the US Navy’s fleet during the attack on Pearl Harbor, American leadership began preparations for a counter attack. One that would convince Americans that this was a fight we could win and one that would cripple the Japanese naval capabilities. Electronic Intelligence intercepts translated by codebreakers began to indicate that a massive second attack would occur somewhere in the Pacific, and became convinced it would center on the island of Midway. By stealthily moving forces to intercept the Japanese fleet, America turned the tide of World War II. They decisively wrecked the Japanese capabilities at Midway, including sinking their flagship destroyer and sole aircraft carrier.

2019’s Midway presents a historically accurate (to a degree, anyway) depiction of the events leading up to, through and after the battle of Midway, starting with the terrifying destruction of the ships anchored at Pearl Harbor. It does so by winnowing down to a half dozen key figures in the fight, from pilots in the air all the way up to the Admirals planning the fight. Key though is the inclusion of accurate representation of Japanese leadership and strategy as well. Midway intertwines the following plot lines, showing the very human essence of these figures, with complex emotions, baggage, and fears:

Dick Best (Ed Skrein) is a hotshot divebomber pilot that ultimately is recognized as leading two separate attacks on Japan’s aircraft carriers, the Akagi and the Hiryu. Best is our insight into the actual air fights, and how he deals with becoming a leader to his men. His wife, Ann Best (Mandy Moore) provides a sounding board and fierce advocate for him, even promoting his capabilities to his superiors when they doubt men will follow him.

Edwin Layton (Patrick Wilson) is the Intelligence officer who warned US commanders that an attack was coming on Pearl Harbor, and they ignored him due to insufficient backup to his predictions. After Pearl Harbor he is given more respect and resources, and along with a peculiar but brilliant codebreaker Rochefort (Brennan Brown) they are able to piece together the details of the Japanese plan to attack Midway, allowing the US to sabotage the plan.

Chester W. Nimitz (Woody Harrelson) and William ‘Bull’ Halsey (Dennis Quaid) are the Admirals planning out the American response to Pearl Harbor. Despite depleted forces, Nimitz is able to get the crippled carrier Yorktown back in the fight and rally enough other forces to win against the Japanese.

Wade McClusky (Luke Evans) is a naval aviator whose spotting of a lone Japanese battleship travelling at full speed allowed the US to find and destroy the fleet it was heading towards.

Jimmy Doolittle (Aaron Eckhart) led a group of US Army aircraft into Tokyo on a daring bombing run. This was the first time that any enemy had ever made it into the Emperor of Japan’s city. While the damage was only moderate, the morale boost was immense for both the military and American public alike. Doolitle’s forces crashed into Japanese occupied China but mostly survived and made it out

When Bruno Gaido (Nick Jonas) sees a damaged Japanese plane about to crash into his ship, he jumped into a nearby bomber and opened fire, knocking it out of the sky as it crashed down just skimming the ship. Gaido was promoted by Halsey who watched it happen. Gaido was later shot down, taken prisoner and executed by drowning.

Isoroku Yamamoto (Etsushi Toyokawa) Is the Japanese Admiral who has to juggle the Emperor’s demands, competition with the Japanese Army and the US forces who want his fleet sunk.

Per History.com:
“On June 6, Yamamoto ordered his ships to retreat, ending the Battle of Midway. In all, Japan had lost as many as 3,000 men (including more than 200 of their most experienced pilots), nearly 300 aircraft, one heavy cruiser and four aircraft carriers in the battle, while the Americans lost the Yorktown and Hammann, along with around 145 aircraft and approximately 360 servicemen.

As a result of the U.S. victory in the Battle of Midway, Japan abandoned its plan to expand its reach in the Pacific, and would remain on the defensive for the remainder of World War II. The battle injected U.S. forces with confidence and drained Japanese morale, turning the tide of war in the Pacific strongly in favor of the Allies.” 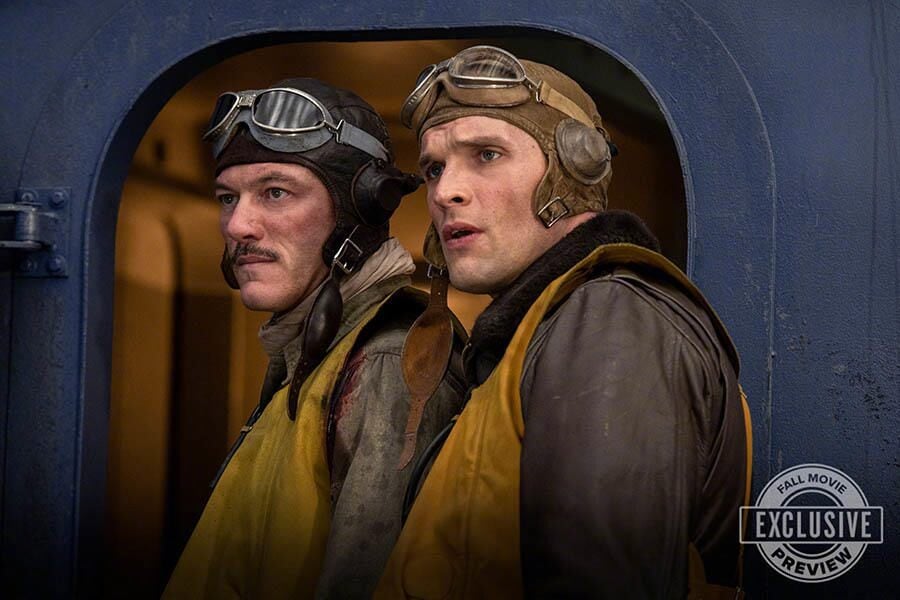 Midway was a labor of love for famed director Roland Emmerich. While he was able to finance its $100 million price tag through using Asian investors, it’s not clear if the film has made a profit globally. It has also earned a sub 50% rating with both critics and audiences on Rotten Tomatoes.

All of this is a damn shame.

Midway should be celebrated as one of America’s greatest triumphs, and yet today we learn next to nothing about it in school. Midway the film does a terrific job honoring those who fought these battles, and is quite respectful of depicting the enemy as complex humans with competing goals and emotions.

Fundamentally the marketing for the film over hyped the action and what is up on screen is a long and detailed history lesson, with middling payoff. The actors are universally competent to great (Quaid’s Halsey is a standout for sure!), but something just doesn’t catapult this film into greatness.

Per IMDB Midway was shot on Panavision Millennium DXL2 in 8K with Panavision H-Series Lenses and mixed down to a 2K DI with Dolby Vision. It’s obviously been upressed to 4K for this disk. I watched it in HDR10 but the amount of HDR was limited, with a few good flashes in explosion sequences. Emmerrich wanted about $25+ million more for this film than what he was budgeted, and while the effects are passable, it’s clear they could have been way more detailed if they had not been done at 2k and uprezzed. While the CGI is a bit underwhelming the rest of the film is highly detailed and well lit. All of the practical scenes are top notch. Heck even the extras are presented in 4K and may be native shot 4K to boot. Is that a first for Lionsgate? 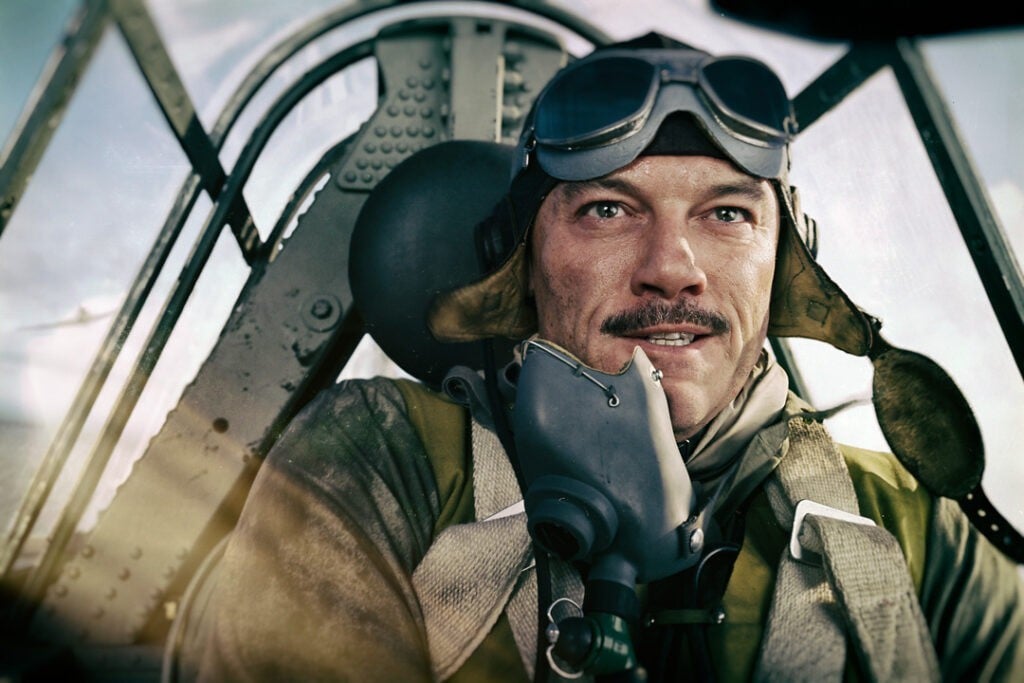 Audio is terrific here. Big sound stage for the fight scenes, with good wraparound audio as bullets and aircraft whiz through the air. A decent amount of height data where it calls for it (mostly dive bombing scenes). I honestly don’t remember much of the soundtrack tho, which is odd, Emmerich’s other movies usually go above and beyond there. I’m going to have to pull that one up again on Apple Music for another listen. Good bass action where required too, especially in the Pearl Harbor opening sequence. 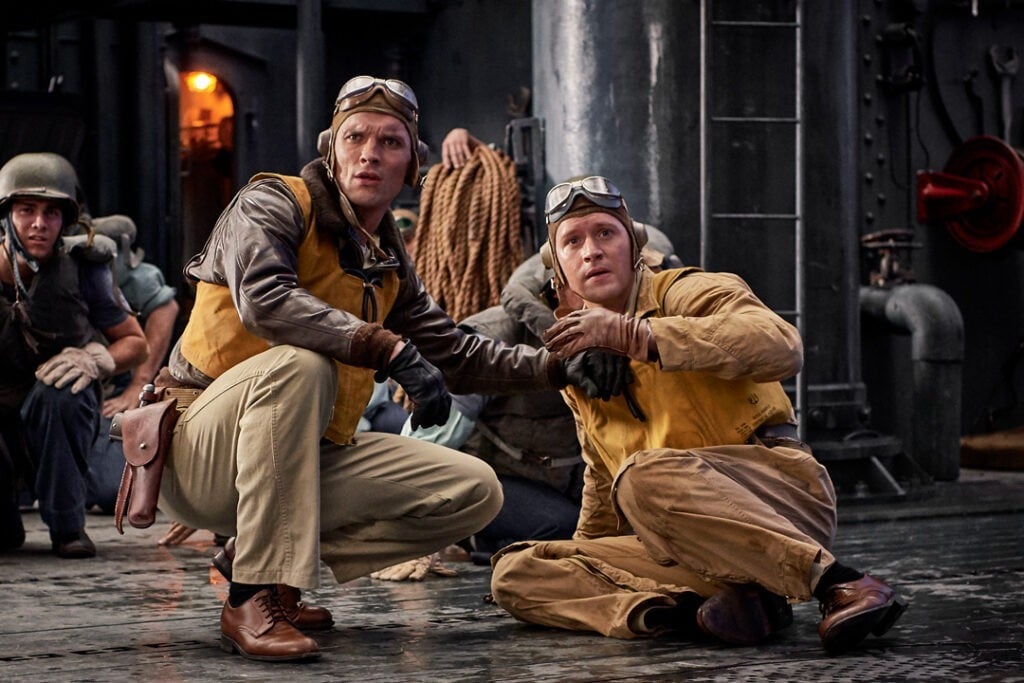 Features:
Getting it Right: The Making of Midway (14:16) – Behind the scenes, well worth your time
The Men of Midway (12:24) – The actors talk about the roles they play and their historic influence
Roland Emmerich: Man on a Mission (4:57) – Emmerich and the screenwriter on what they went through to get this made
Turning Point: The Legacy of Midway (15:00) – Discussion on the historic impact of Midway
Joe Rochefort: Breaking the Japanese Code (6:14) – Behind the scenes of what the Codebreakers did
We Met at Midway: Two Survivors Remember (9:29) – Two amazing vets talk about their historic friendship

Honestly this is one of the best batches of extras I’ve seen from Lionsgate in a while. They reported as showing in 4k on my system, I could not tell if that was native or upscaled tho. 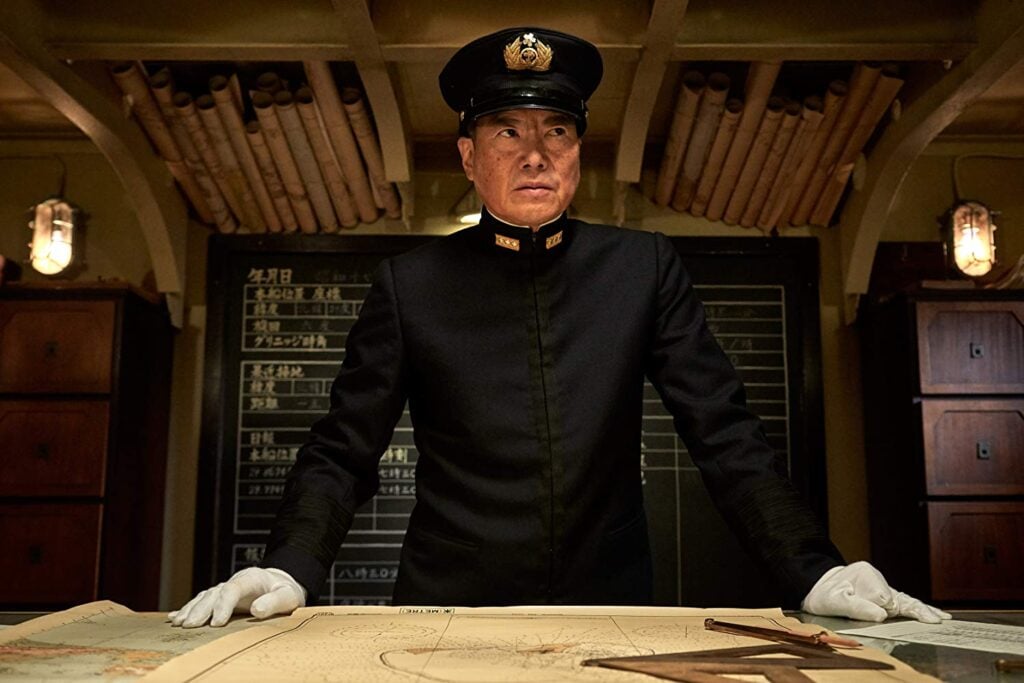 Overall I consider Midway a near miss. As a retelling of a lost piece of American history it definitely informed me of something I am sad to say I was sadly ignorant of, up until now. I’m definitely going to read up on it, including taking a crack at Layton’s memoir and watching some of John Ford’s videos actually shot on location at Midway during the battle. “Keep shooting” indeed.

As a vehicle for entertainment tho, it somehow manages to be a little flat despite the great performances. I can’t put my finger on it, but maybe it was just a smidge too long with too many jumps between the players.

Regardless, this should be a film every US student has to see at least once. Those who forget the past are damned to repeat it! 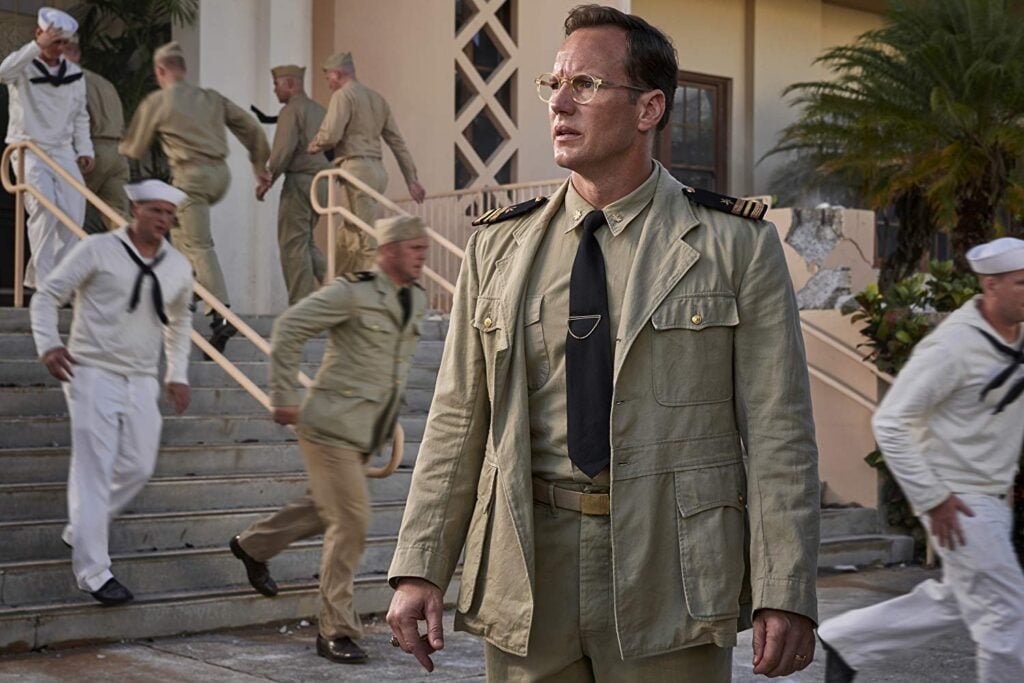 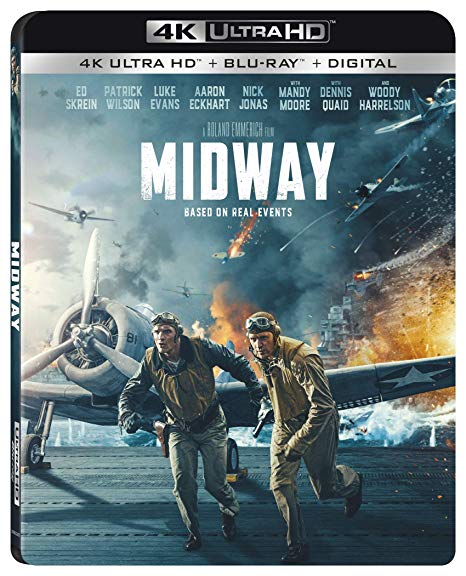