Forum List What's new Dark Style Change width
Log in Register
What's new Search
Menu
Log in
Register
Navigation
Install the app
More options
Dark Style
Close Menu
Posted on October 19, 2019 by Sam Posten
You are using an out of date browser. It may not display this or other websites correctly.
You should upgrade or use an alternative browser.
So we just gonna ignore the bear then? 2.5 Stars 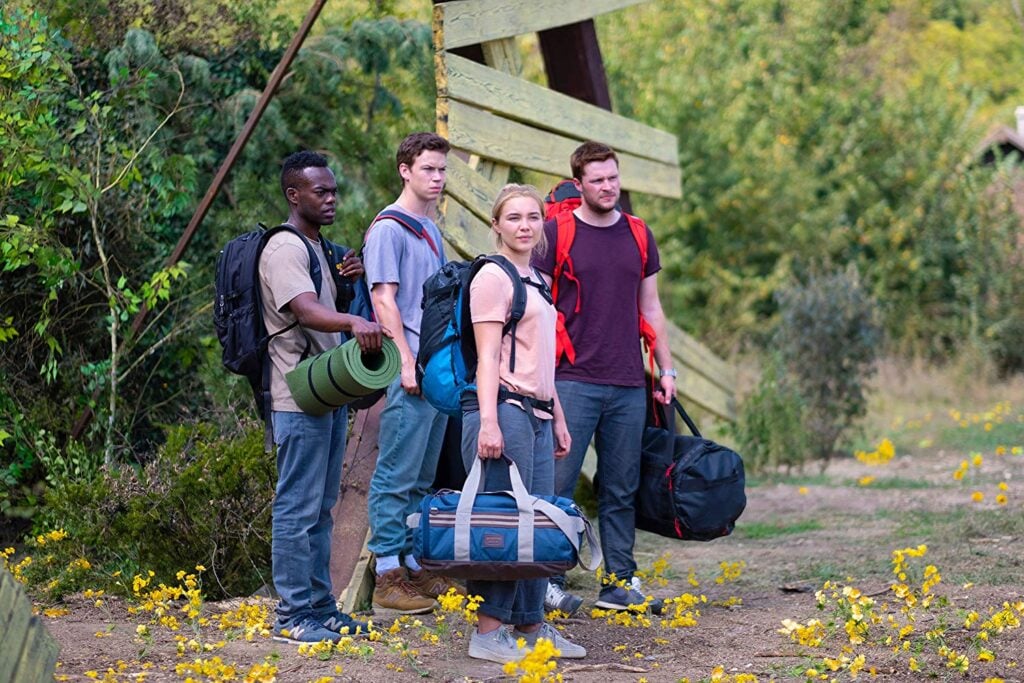 Dani (Florence Pugh) has just experienced extreme trauma when her bipolar sister kills herself and takes their parents out with her in a murder/suicide. Because Dani was already withdrawn before that, her boyfriend Christian (Jack Reynor) has been venting to his buddies Mark (Will Poulter), Josh (William Jackson Harper) and Pelle (Vilhelm Blomgren) who try to get him to break up with her. Instead, when Dani learns that Christian is planning to travel with his bros to Sweden to participate in Pelle’s communal Hårga celebration of Midsommar, which only takes place every 90 years, she takes him up on his halfhearted invitation to join them.

On arrival the Americans decide to start the festivities by taking magic mushrooms. Dani, already emotionally imbalanced, has a bad trip where she keeps feeling persecuted by the commune/cult and sees her sister recreate the killing of their parents. Later in the vacation the group witnesses an Ättestupa, where seniors ritually commit suicide, further pushing Dani into her despair. Despite being initially shocked Christian and Josh start fighting over who is going to get to use the experience as part of their grad student theses. Josh angers the commune by peeing on a sacred site.

Unease further sets in on the group as their numbers start dwindling. First the couple that Pelle’s brother invited disappear and then their own numbers shrink suspiciously. Ultimately Dani becomes the Mayqueen for the cult, but just what that entails is uncovered as the Hårga’s pagan beliefs are revealed. 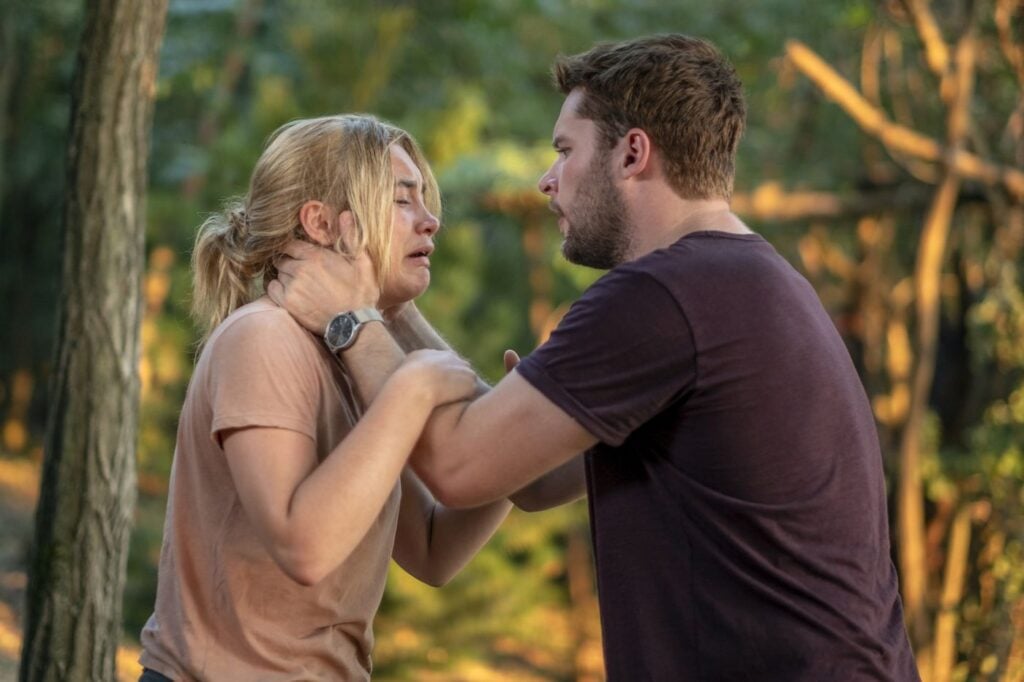 Like Hereditary, Midsommar is a slow burn with a payoff that is more ridiculous than shocking. Ostensibly a horror film, Midsommar uses the genre as camouflage to really highlight the horrors of family, mental illness, badly formed relationships, sexual desire, bro culture, and drug use. While it’s definitely not a cannibal film, it uses many of the tropes and diversions that genre specializes in to bury Midsonnar’s themes and points deep beneath it’s colorful veneer.

Dani’s journey isn’t just geographic. It’s primarily from someone on the outside of the balance of power in her life, submissive to her boyfriend and victim to her sister’s evil, into someone of power in the Hårga cult. Her final act of sacrifice is against someone who stuck by her despite her emotional expressions, and who would not have cheated on her had he not been on drugs.

The hardest theme to track in the film is its most frequently occurring: outside influence. Is Dani a victim who bounces around because of the actions of others? Would Christian have strayed if he was not drugged? Would Dani have fallen for Pelle if he wasn’t tricking her all along? Do drugs make people do things they wouldn’t normally do? Was Mark set up for failure by the lure of knowledge, and the Hårga planned for that? Could Josh have really known that a fallen tree was sacred?

There are so many questions besides that. Is the cult’s emotional mimicry supposed to emotionally help those they are mirroring or make them feel part of a larger purpose? Is Christian wrong to drift from Dani because of their incompatibilities or are they staying together for the wrong reasons? Are we just going to ignore the bear?

I note that Midsommar has a generally positive review run, as tracked by Rotten Tomatoes. But, like Hereditary, it just didn’t work for me. I loved the sense of dread that both films evoke, but neither payoff caught me off guard or shocked me. 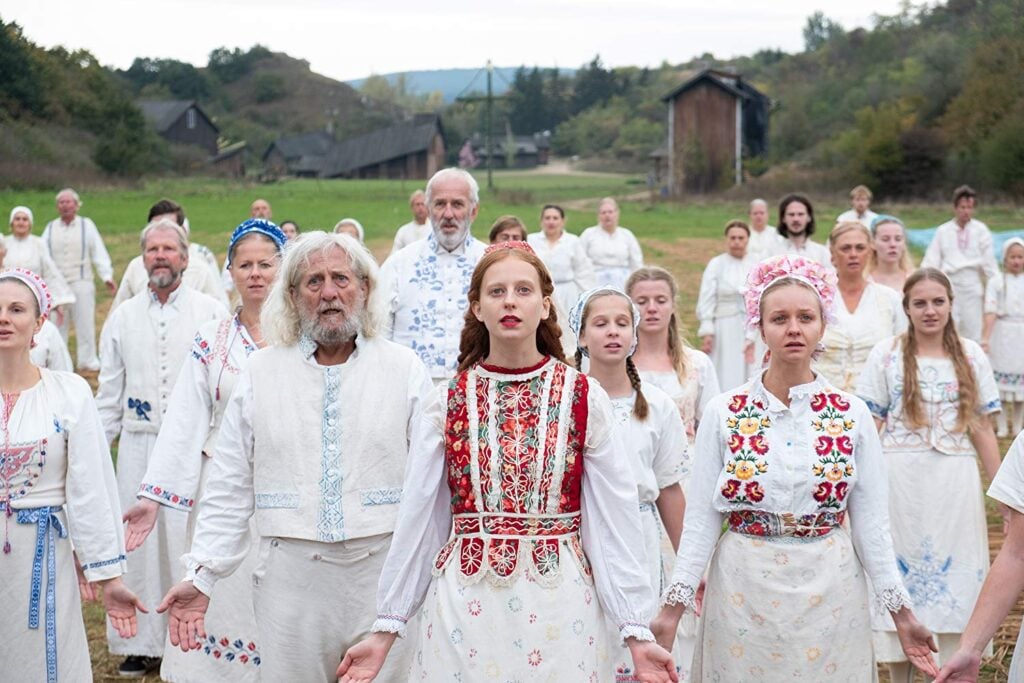 If any 2019 film is calling out for 4k release it is Midsommar. Hints and rumors are floating but only the Europeans are seeing an official one coming in November, from a different release house than Lionsgate. Add to this that there’s a directors cut ALREADY on the market (Apple TV digital exclusive) and one is sure to happen sooner than later.

Midsommar is meticulously filmed. The details of the costumes, the countrysides, the Hårga people themselves, and the creepy indoors to their dwellings could provide hours worth of investigation. This Bluray holds up as best it can in against that tornado of detail and leaves me wanting more.

Rating what we have is therefore somewhat challenging. Detail levels are at the far end of what Blu is capable of course, but the colors and artistry also shine. It’s a predominantly daylit film so no grain issues were apparent and there’s not a ton of thin focus either so lots of details are in sharp relief deep into the background. I did watch it once through on an OLED that struggled with the pans a bit, but I believe that to be hardware dependant and not baked into the film. It was way less troublesome on my projector.

One reason to NOT push for the use of 4k? The practical effects on the bodies. The seniorcide body smashing looked ok, but the rest of the victims looked totally weak to me. Some of them look like papier mache heads on scarecrow bodies. Maybe that’s even intentional (See the wikipedia article on Blood Eagle perhaps). And let’s not even discuss the bear. 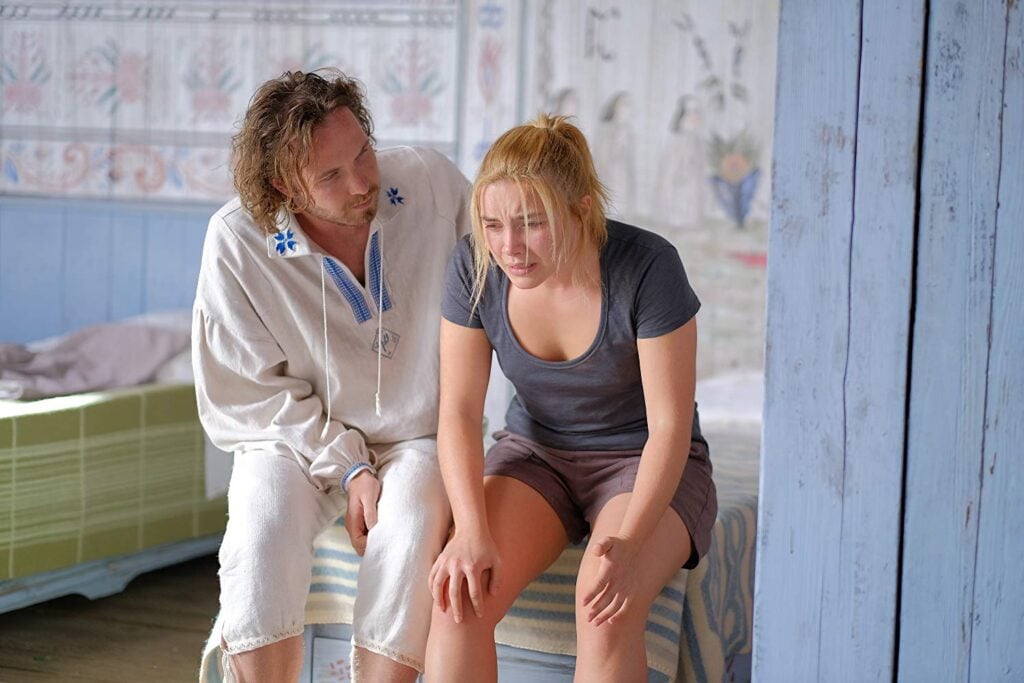 Midsommar is not afraid to put the action into the sides and rears, even for just basic dialogue. Chants and throat hacks from the Hårga come from all around and the eerie music does too. As beautifully shot as the film is, the sound holds up its end too.

Zero point zero on any bass action tho! Not surprising, just don’t be surprised. 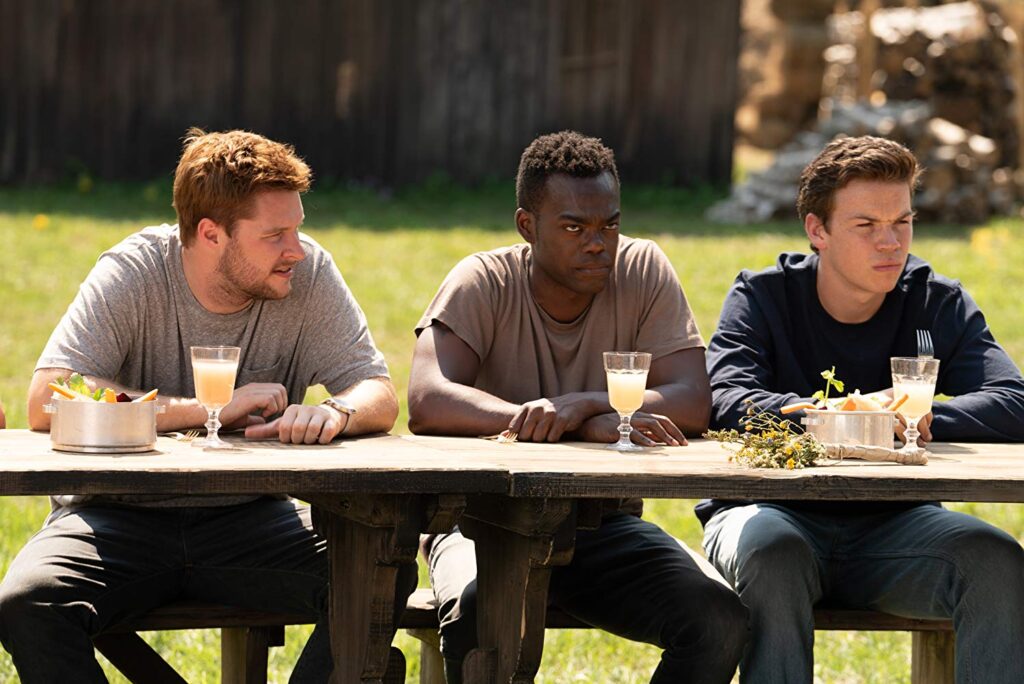 There’s exactly two extras. First up is a cute/creepy trailer for a bear in a cage figurine you could buy from the Lionsgate shop. Meh. The bear doesn’t even get to do anything cool in the film but shed his skin with zero explanation.

The real meat is a 20+ minute ‘making of’ called ‘Let the festivities begin. Recommended if, like me, you want to know just what the hell the intentions were from Aster and crew.

I guess I’m just not going to be an Aster fan. Neither Hereditary nor Midsommar work for me from a fundamental perspective, tho I can and do appreciate the artistry he uses to tell his stories. I think he needs a more judicious editor tho, you CAN go too far on build up and letting your camera linger on things you think are important.

On its own merits I found Midsommar insufferably long and without a satisfying payoff. None of the American characters were either truly awful nor worth rooting for. You can hate Pelle for entrapping them but you also can look at it from a cultural perspective and note that many of our own traditions are outdated and rooted in history that no longer resonate, even if they aren’t quite as deadly. I should mention that I went to college first to be an archaeologist and suffered through a few anthropology classes before bailing on a career more in line with my sensibilities and skill set, so maybe that’s also grating on my opinion too. There’s plenty of fault to find here. 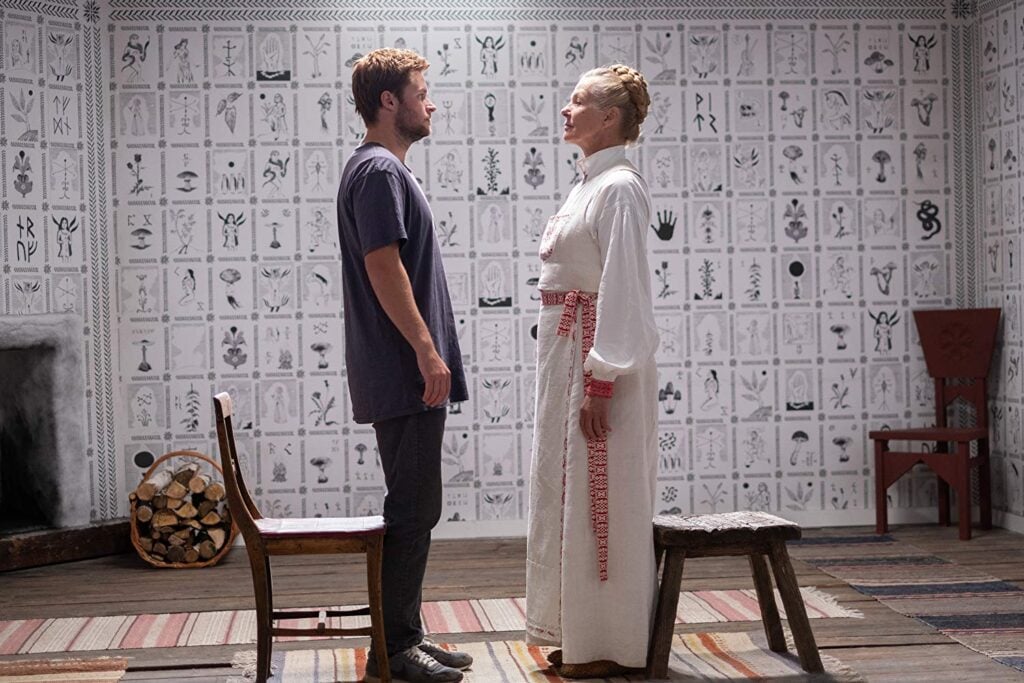 I enjoyed reading your review - it's refreshing that not every home video review praises films that have otherwise generally received good reviews. I'll be picking up the 4K disc version, when it's released in Italy in november. I also includes the Director's Cut, which I haven't seen. I like the cover for that release - it's so much better than the US theatrical poster! Martin Scorsese enthused about Midsommar in the latest edition of EMPIRE magazine: "The editing, the camera moves - glorious! And the image of her in the flowers? My God!"

Nice review Sam. The lead actress was excellent. I liked the movie, great visuals, could have been about twenty minutes shorter though. The original Wicker Man still can't be beat in the pagan movie genre.

titch said:
I enjoyed reading your review - it's refreshing that not every home video review praises films that have otherwise generally received good reviews. I'll be picking up the 4K disc version, when it's released in Italy in november. I also includes the Director's Cut, which I haven't seen. I like the cover for that release - it's so much better than the US theatrical poster!
View attachment 64273
Click to expand...

I hope the US special edition looks like that!


titch said:
Martin Scorsese enthused about Midsommar in the latest edition of EMPIRE magazine: "The editing, the camera moves - glorious! And the image of her in the flowers? My God!"
Click to expand...

It IS beautifully shot. And the cinematography is beyond criticism. It's NOT a good movie.


DeanR said:
Nice review Sam. The lead actress was excellent. I liked the movie, great visuals, could have been about twenty minutes shorter though. The original Wicker Man still can't be beat in the pagan movie genre.
Click to expand...

Agreed, Pugh is awesome. And it needs an editor, not an indulgent 30 minute longer version!

I have never seen Wicker Man, it's on my to do list!

For more amazing Florence Pugh, search for Lady Macbeth (2016). Awesome performance in an excellent film. The story has nothing to do with Shakespeare, but with the Russian story, Lady Macbeth of Mtsensk, set in England.

I interpret the fact that Sam didn't like it to bode well for me possibly enjoying it.

I'm definitely tempted to buy it on iTunes, since the extended version is included, and the price is very reasonable, at $15. Movies like this can be a matter of mood. You need to be in the right one to appreciate it, sometimes.

Just watched it. Loved it.
Loved Hereditary too.

JohnRice said:
I interpret the fact that Sam didn't like it to bode well for me possibly enjoying it.

I'm definitely tempted to buy it on iTunes, since the extended version is included, and the price is very reasonable, at $15. Movies like this can be a matter of mood. You need to be in the right one to appreciate it, sometimes.
Click to expand...

Sam Posten said:
It's NOT a good movie
Click to expand...

Oh but it is. Its a tremendously great movie!

https://www.movie-censorship.com/report.php?ID=992213
You must log in or register to reply here.