Bella Thorne and Patrick Schwarzenegger star in Midnight Sun, a very entertaining romantic melodrama based on a 2006 Japanese movie of the same name.

Katie Price (Bella Thorne) has lived a fairly sheltered life as she is about to graduate from high school, having been diagnosed with Xeroderma Pigmentosum (XP for short) as a child. According to Wikipedia, XP “is a rare autosomal recessive genetic disorder of DNA repair in which the ability to repair damage caused by ultraviolet (UV) light is deficient.” In more simple terms, any exposure to sunlight, even minor, is irreversibly damaging and can lead to death. Neighborhood kids, upon seeing her behind heavily tinted windows, not understanding the disease, would often tease that she was a vampire. All except Morgan (Quinn Shephard), who asks Katie’s father, Jack (Rob Riggle), if she can play indoors and in the evenings after school with Katie. The two quickly become best friends. From her bedroom window, each day as she grows up, she sees Charlie Reed (Patrick Schwarzenegger) go to and from school, developing a crush on him. To celebrate her home-schooled high school graduation, Jack allows Katie to spend the evening playing her guitar at the train station. You guessed it, she runs into Charlie, gets tongue-tied, and flees the scene, leaving her notebook full of songs behind. The next day, Morgan sees Charlie at the train station with Katie’s notebook, and arranges an exchange between the two that evening. It then leads to a summer romance, with Katie telling Charlie she’s only available in the evening and neglects to tell him about her affliction. That is, until Charlie surprises her with a romantic all-nighter (sans sex) that has him suddenly racing to get her home before the sun rises.

Midnight Sun is the kind of movie that most know where it’s going to lead you. There simply is no denying that when dealing with the diseased romance tearjerker genre, the outcome is fairly predictable. However, it is the character development and the level of acting, as well as Scott Speer’s (Step Up: Revolution) direction that elevate this film from a run of the mill disease of the week TV movie that never transcends into the usual YA trappings. Rob Riggle, who acts mostly in risqué comedies like The Hangover and 21st Jump Street, shows some true dramatic range as the very caring father Jack. Bella Thorne (The DUFF, Blended), Patrick Schwarzenegger (Arnold’s son, in his first starring role), and Quinn Shephard (a rising director herself) have a nice chemistry together without it having to be a love triangle.

The 1080p AVC-encoded transfer captures the film’s intended 2.39:1 theatrical aspect ratio and provides a pleasing image, despite the film’s many low-light nighttime sequences. Detail is very good, especially textures, facial features, and the Seattle skyline. Colors are strong and vivid without bleeding, and flesh tones appear natural. Contrast is also very good, although there are a few instances of slightly noticeable black crush and noise during some of the darker-lit sequences. I did notice some minor banding in one or two shots, but nothing to really worry about.

Midnight Sun has only one audio track, and that is a fairly standard DTS-HD Master Audio 5.1 track in English. The track is serviceable and accomplishes what it needs to, providing a nice wide canvass for its music performances; ambient atmospheric effects like crowds, crickets, and what not; and clear and understandable dialogue throughout. Nothing to complain about, but nothing to overly praise, either.

Midnight Sun: An Inside Look (1080p; 2:21): A very brief piece of EPK fluff on the making of the film. What is odd is that it includes clips from a few music videos produced to help market the film, but those are nowhere to be found on the disc (I did locate them on YouTube, though).

DVD Copy: The movie in 480p and Dolby Digital 5.1 audio, with the same special feature listed above.

Midnight Sun was a real surprise, an above average teen romantic melodrama dealing with a rare disease that is elevated by its performances. The real disappointment comes in the almost non-existent special features. 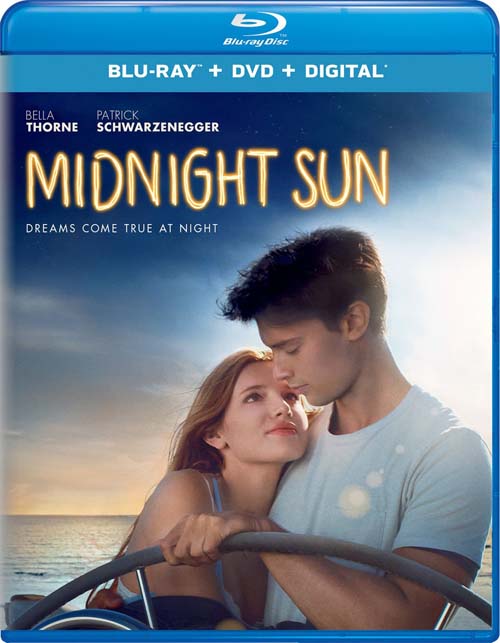