Forum List What's new Dark Style Change width
Log in Register
What's new Search
Menu
Log in
Register
Navigation
Install the app
More options
Dark Style
Close Menu
Posted on February 5, 2016 by Matt Hough
You are using an out of date browser. It may not display this or other websites correctly.
You should upgrade or use an alternative browser.
A cracking good spy yarn 4 Stars

Based on the long-running British television series Spooks, Bharat Nalluri’s MI-5 (which is the name the series ran under here in the United States) is a cracking good spy flick.

Based on the long-running British television series Spooks, Bharat Nalluri’s MI-5 (which is the name the series ran under here in the United States) is a cracking good spy flick. Filled with numerous twists and turns and some quite unexpected jolts of violence (all very much part and parcel of the original series), MI-5 runs like clockwork, doesn’t wear out its welcome, and provides a satisfying sense of achievement once it’s concluded. With a cast combining familiar faces from the series with some hip new stars, this is a popcorn movie worth savoring.

When violent terrorist Adem Qasim (Elyes Gabel) makes a slick, almost effortless escape from the custody of MI-5 before it can turn him over to the American CIA, director Harry Pearce (Peter Firth) takes the fall for the debacle and promptly disappears. To discover his whereabouts, new acting director Oliver Mace (Tim McInnerny) calls upon a former agent now disenfranchised and working in Moscow, Will Holloway (Kit Harington) who had at one time mentored under Pearce. Will isn’t very willing to help, but Harry informs him that the escape had to have been arranged by one of the principal top agents within the agency meaning either Oliver Mace, Geraldine Maltby (Jennifer Ehle), Philip Emerson (Elliot Levey), or Francis Warrender (David Harewood) was responsible for engineering the escape for the purpose of utterly weakening the perception of MI-5 and having it fold. Though each distrusts the other, Will and Harry strike an uneasy truce while each pursues his own agenda toward finding out the ultimate truth.

The Sam Vincent-Jonathan Brackley screenplay makes spectacular use of varied London locations (with a couple of side trips to Moscow and Berlin) in setting up this labyrinthine puzzle which, while complicated enough, is nevertheless not the least bit a chore to follow. Despite some really shocking bursts of unexpected violence (which director Bharat Nalluri has the decency to film discreetly), the movie’s fast pacing and numerous twists (which one doesn’t often see coming) make it an enjoyable thrill ride of the first order. The well-constructed writing varies the surprise payoffs: sometimes the ironies are revealed fairly close to their initial occurrences while other revelations come much later after the fact making their explanations that much more delicious. True, there are occasionally some moments that don’t ring true (agents trying to be subtle but standing out like Mardi Gras floats on parade), but those are the exceptions rather than the rule. One would think that the tensely directed and most exciting final face-off between the terrorists and their prey would be the film’s climax, but this is a movie that has a few more tricks up its sleeve before it’s done putting a satisfying cap on all that has come before.

Peter Firth plays his cards very close to his vest as the disgraced head of the agency trying to root out the truth of his downfall, and he and Kit Harington have a prickly kind of camaraderie that plays exceedingly well in this type of espionage picture. Tim McInnerny gives a showy performance as Oliver Mace, like Firth one of the holdovers from the television series. Jennifer Ehle is all business as Geraldine Maltby while David Harewood keeps the threatening leash of extinction tightened as Francis Warrender. Elyes Gabel playing Adem Qasim offers a reasonably charismatic terrorist, and Lara Pulver as enterprising agent Erin Watts sparks a few memorable scenes, too.

The film’s theatrical aspect ratio of 2.40:1 is faithfully rendered in this 1080p transfer using the AVC codec. Sharpness is very good throughout the presentation, and color has been well managed and is always under control. Skin tones are especially realistic. Black levels are merely good, but contrast has been consistently maintained. The movie has been divided into 16 chapters.

The DTS-HD Master Audio 5.1 sound mix gives you just the right amount of explosive action and resonant heft that one requires from an action film such as this one. Explosions and gunfire have enormous thrust and really resonate in the listening environment, and split atmospheric effects are used well and often. Dialogue has been well recorded and has been placed in the center channel. Dominic Lewis’ background music has been threaded throughout the soundstage to great effect without ever overpowering the dialogue.

Deleted Scenes (5:33, HD): three scenes may be viewed together or separately.

MI-5 comes several years after the end of the television series on the BBC, and fans should be thrilled to be getting another high quality installment of the story in this exciting and well produced feature version of the series. Recommended!

Based on the long-running British television series Spooks, Bharat Nalluri’s MI-5 (which is the name the series ran under here in the...
Continue reading the original article.
Click to expand...

I enjoyed this movie much more than expected. Some great shots on London that looked fabulous in HD.
You must log in or register to reply here. 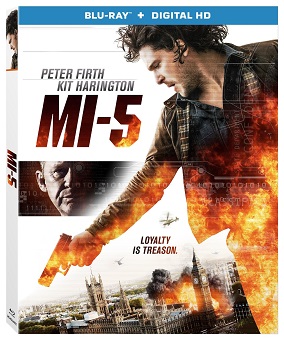